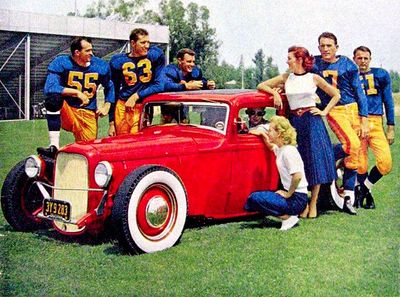 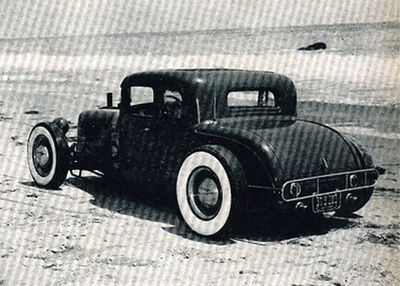 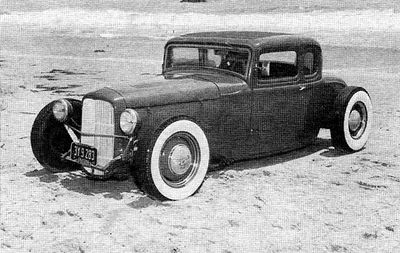 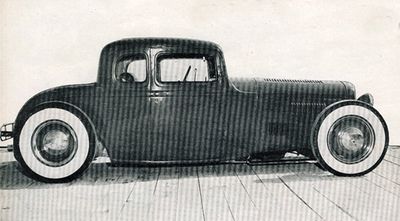 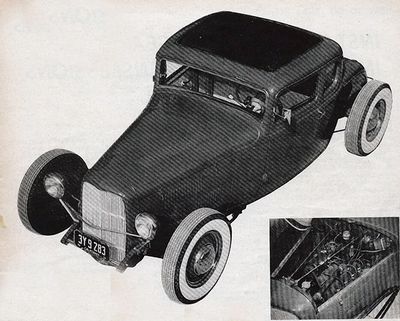 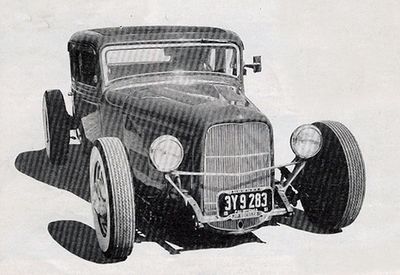 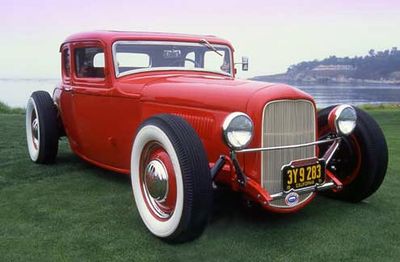 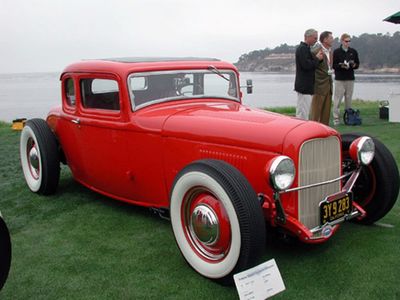 1932 Ford 5 Window Coupe built and owned by Don Williams of California. The Coral red coupe was chopped 5 inches and channeled 7 inches over the frame. The frame was kicked up 7 inches in the rear. In the front the coupe sported a dropped 1932 Ford axle. It was powered by a stock 1946 Mercury flathead for reliability since it was a daily driver. When the coupe was featured on the cover of Hot Rod Magazine November 1951, it was surrounded by Tom Fears, Larry Brink, Norm Van Brocklin, Bob Waterfield and Glenn Davis of the Los Angeles Rams football team.

Don had epilepsy and was prone to seizures. Prior to being featured in Hot Rod Magazine, the state took Don’s license away for having too many speeding tickets and for erratic behavior. They even made him sell the car, which he did, to his aunt. From that point forward, Don hid the coupe and only took it out when he was sure he could get away with it. Don didn’t have a driver’s license and the coupe was almost always hidden.[1]

It was the early 1950’s, and John Labelle was heading to Don's place to see about a motorcycle. Don offered to show John his Coupe, he took John over to an old shed with huge barn doors. He unlatched the antiquated locks and rolled the door open. As soon as he did, a deuce grille shell popped in the darkness. “Get in. Let’s go for a ride.” So the two fired up the coupe and headed out on the side roads. Don grabbed a fistfull and put the little car through it’s motions. The rear tires lighted up on a whim and before John knew it, they were sideways in the median and then sideways on the shoulder. Tire smoke, gas smells, loud noises, vibrations from the deep… all hell broke loose in the coupe that day.[1]

Afterward, John figured out two things. First, Don Williams was of right mind and needed to be a buddy. Second, he was gonna own that coupe someday. As time went on, John and Don did become pals. In fact, John sold Don a few cars over the years and the two accumulated more than a story or two together. One day, John got a new motorcycle and decided he needed to repay Don for that wild ride in the coupe. With Don securely mounted on the back, our hero ripped ass through town. This-a-way, that-a-way – over 100 mph in some cases. When the two got back to Don’s house, Don jumped off the motorcycle, started flailing his arms, and cussing up a storm. Confused, John jumped on his steed and hauled ass.[1]

Later that day, he got a call from Don’s mother.“John, I thought you should know… Don has epilepsy and is prone to seizures. That’s what you saw today.” To do this day, John wonders what could have happened on any of the wild rides he took with Don. The possibility of an epileptic seizure at any moment brings new meaning to danger in a hot rod.[1]

50 years later, John and Don lost touch somewhere along the way, but John could not stop thinking about that little coupe. He looked for it everywhere, but it was nowhere to be found. And then, Von Franco and John were cruising a swap meet when they hear word that the car had surfaced. A quick conversation with Aussie Steve confirms the notion and a few months later John owned a dream.[1]

It sits today just as it was on the cover of Hot Rod Magazine. John cleaned it up a little, but did nothing to disturb the originality of the car. Anyone that saw it at Pebble Beach knows that it is in incredible condition for an unrestored car of it’s age. It couldn’t be in any better hands than John Labelle’s… And with some luck, we will get into those hands a tad later.[1]

Please get in touch with us at mail@kustomrama.com if you have additional information or photos to share about Don Williams' 1932 Ford.