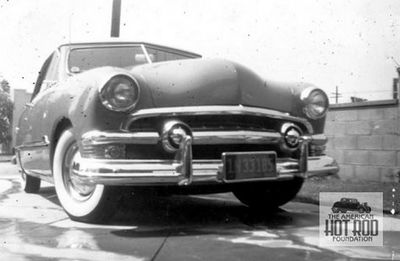 Don's Victoria as it appeared in 1952. By then the car had been nosed and decked. Photo courtesy of Don Tubbs, provided by American Hot Rod Foundation. 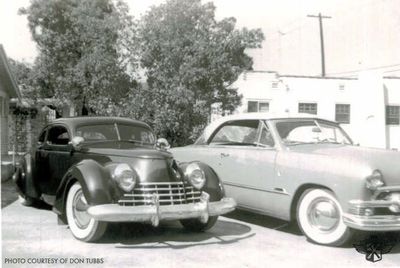 A photo of Don's Victoria next to fellow Glendale Esquires member Glenn Johnson's 1937 Ford Coupe in 1952. Photo from the Don Tubbs collection, courtesy of the American Hot Rod Foundation. 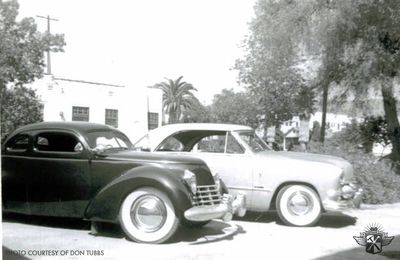 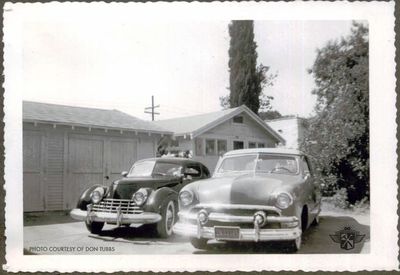 1951 Ford Victoria owned by Glendale Esquires member Don Tubbs of Glendale, California. Don bought the Victoria in late 1950. It was one of the first Victoria's to come to Don's local Ford dealer. Right after he got it, he nosed and decked and lowered the car all around. He put on dual exhaust with 30 inch glass packs, chopped a set of Mercury skirts and put on Moon hub caps. Later he bought a 3/4 race cam.[1]

When the Santa Ana Drag Strip opened in 1951 Don's club the Esquires went as a group to check out how fast their cars would go. Don took home the trophy for the fastest car in the club at around 80 MPH. In late 1952 Don joined the Navy, and he sold the Victoria around 1953 - 1954 while he still was drafted.[1]

Please get in touch with us at mail@kustomrama.com if you have additional information or photos to share about Don Tubbs' 1951 Ford.