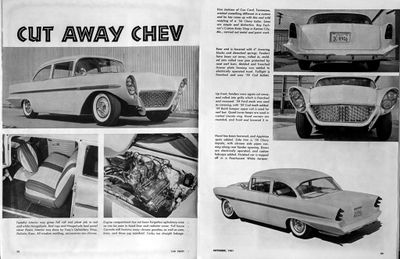 Don's Chevrolet was featured in Car Craft September 1961 as the "Cut Away Chevy." 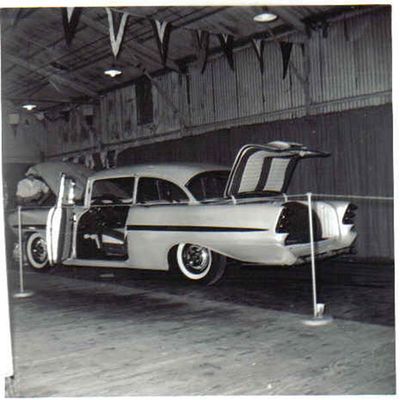 1956 Chevrolet restyled by Farhner Custom Shop for Don Jackson of Concord, Tennessee. In 1961 Don told Car Craft Magazine that he wanted something different in a custom, so he came up with this real wild restyling of a 1956 Chevrolet tudor.[2]

According to Tom Davison, Don's 56 was restyled by Doug Thompson, who apprenticed with Ray Farhner from he was 14 years old. "Ray was an old-time bodyman, but he learned all he knew of customizing from Doug. Doug would have been about 23,24 at the time of this Chevy."[3]

Up front, the fenders on Don's Chevrolet were cut away, and rolled into the grille. They were also modified to accept canted quad headlights from a Lincoln. The grille was frenched and recessed, and it housed an inset made from 1958 Ford mesh and 1959 Cadillac teeth. 1959 Buick bumper upper rails were used as nerf bars up front. The hood was louvered, shaved for chrome, and the corners were rounded. The rear fenders were also cut away, rolled in, and molded into a rolled rear pan. Nerf bars were installed to protect the rear of the car. The trunk was electrically operated, and it featured a molded and frenched in license plate housing. The taillights were frenched and fit with 1959 Cadillac bullets.[2]

The door handles were shaved, and the doors were electrically operated. The stock sidetrim was replaced with side trim from a 1958 Chevrolet Impala. The rear end on Don's Chevrolet was lowered with 4" lowering blocks and dearched springs. The front was lowered 3 inches. Custom accessory included Appleton spotlights, custom hubcaps, and chromed side pipes that ran along the rear fender openings. It was finished off in a Pearlescent White lacquer.[2]

Inside, the car was given a full roll and pleat job in red and white Naugahyde. Red rugs and Naugahyde heel panels covered the floors. The interior work was done by Tony's Upholstery Shop in DeSoto, Kansas. All windown molding and accessories were chromed.[2]

Don's Chevrolet was powered by a full house Corvette mill. The engine featured many chrome goodies, as well as cam, bore, and a three-carb intake manifold. The carb ran straight linkage. Tony's Upholstery Shop did also make rolled and pleated hood liner and radiator cover for the car.[2] The build was completed in 1961.[1]

Please get in touch with us at mail@kustomrama.com if you have additional information or photos to share about Don Jackson's 1956 Chevrolet.