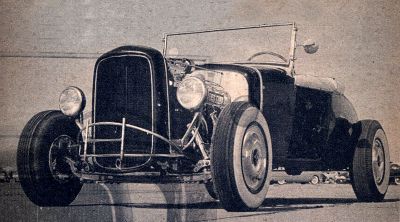 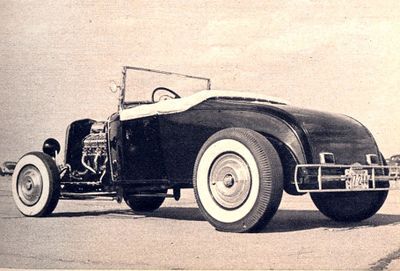 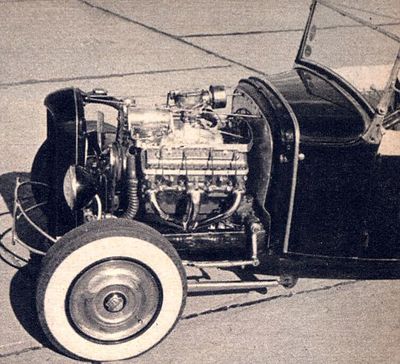 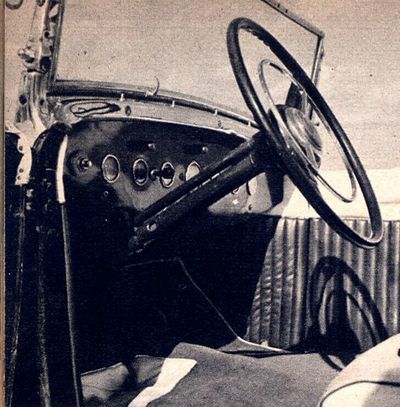 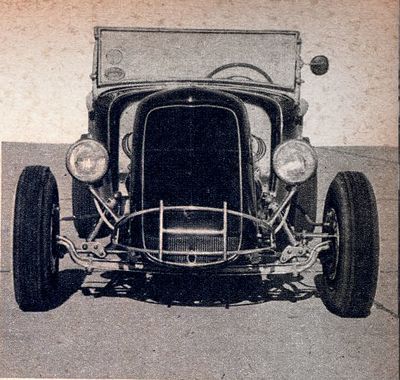 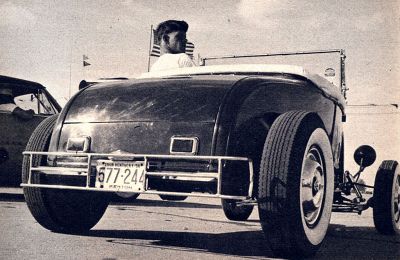 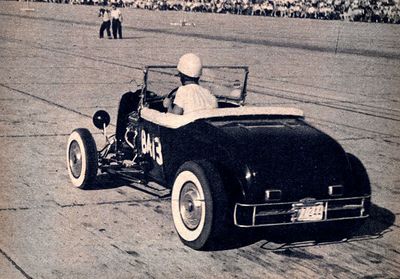 1931 Ford Model-A Roadster built and owned by Don Conrad of Covington, Kentucky in a spawn of two years. Don acquired a tired '31 Model-A Ford in 1952, that many people of the time gladly would have sent to a wrecking yard. After 24 years in service, the A was ready to retire. Don, though, felt just the opposite, the A was about to enter its prime of life. He proceeded to disassemble the car by piece until it lay scattered all over his garage. Before assembly of the rod had begun, the various parts and pieces had been carefully sorted in two separate piles. One pile was for parts to go, and the other for parts to keep. The parts to go was way bigger than the stay pile, but that's half the fun of building a car. The frame was repaired and fit with a 1950 Oldsmobile V8. A 1941 Ford transmission was installed with the help from a Olds-Ford adaptor plate. The stock Model-A rear end assembly was reinstalled. The frame was modified with a kickup, so the body could become closer to the ground without interfering with the up-and-down rear wheel movement. A dropped 1932 Ford axle was mounted up front. Several various year Lincolns gave up their essential parts for the roadster. From a 1940 Lincoln came the hydraulic brakes and spindles. A 1949 Lincoln was pirated for its 15-inch wheels which were fit with 5.90-15 tires up front and 8.20-15s in back and Oldsmobile Sombreros. The body was channeled 4 inches over the frame to hide the frame.[1]

Charlie's Top Shop of Cincinnati, Ohio was responsible for the outstanding job of upholstering. Naugahyde was used throughout the interior and it was both rolled and pleated in a two-tone red and white theme. Twenty coats of black lacquer completed the exterior and the choice of the color alone is an indication of the workmanship on the body. Black usually has a bad habit of showing up every little dent and ripple in the surface upon which it is painted. It takes a lot of nerves to paint a car this shade for the metalwork must be above the ordinary. Nerf bars were constructed to protect the 1932 Ford grille shell and body. The complete car tipped the scales at 2400 lbs, and cost over $2000 to build.[1]

Please get in touch with us at mail@kustomrama.com if you have additional information or photos to share about Don Conrad's 1931 Ford.