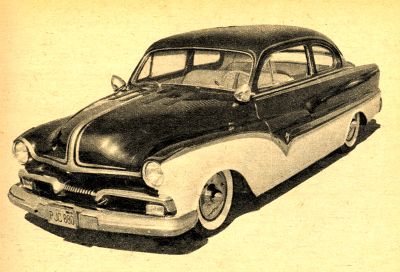 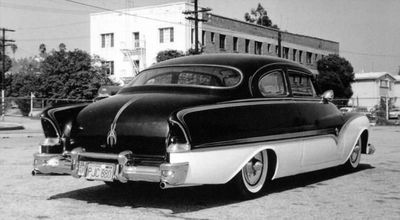 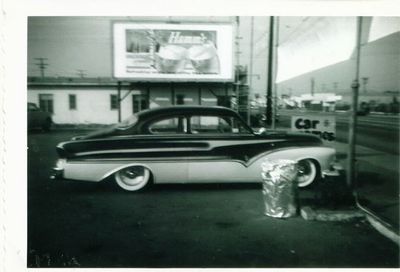 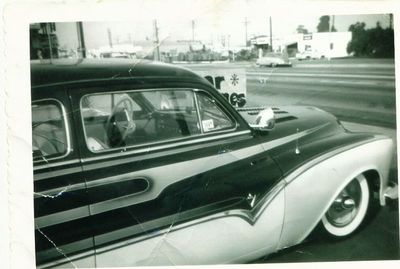 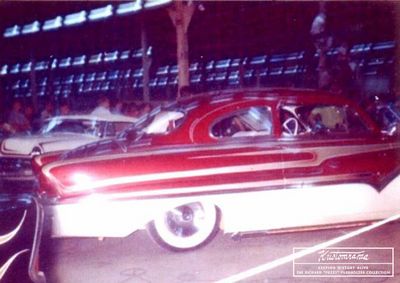 A photo of Dick's Mercury from the 1959 NHRA National Championship Custom Car Show in Detroit, Michigan. Photo from The Richard "Fuzzy" Fuerholzer Collection.

1950 Mercury owned by Dick Schneider of Toledo, Ohio. Before Dick moved to Bell, California he was a member of the Pharaohs. After buying the half completed Mercury, Dick decided to add a few ideas of his own to the car before he assembled the car. The stock wheel wells were cut out and 1956 Chevrolet wheel wells were welded to the body, giving the car a total new appearance. The body was nosed, decked and shaved for handles. Six rows of louvers were punched into the molded hood, securing the engine enough cooling. The headlights were frenched and recessed by using 1952 Mercury headlight rims. A 1955 Plymouth grille bar was installed and the center piece was color chromed. The windshield was V-butted and dual spotlights were added, giving the roof a lower look. The rear end was modified with 1951 Mercury fenders, which made it possible to install 1955 Lincoln taillights. The rear bumper had its corners notched for the exhaust pipes. 1955 Ford sidetrim was installed to seperate the Titian red ad white lacquer paint job.[1]

Please get in touch with us at mail@kustomrama.com if you have additional information or photos to share about Dick Schneider's 1950 Mercury.