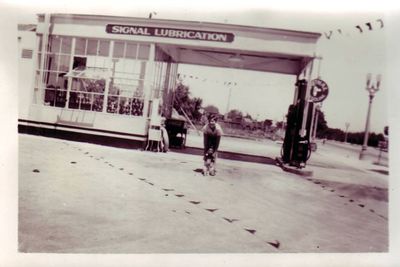 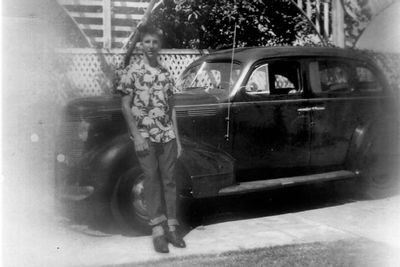 An early photo of Dick next to his dad's 1937 Pontiac. According to Hot Rod Network, Dick would maintain the car to keep his driving privileges "current". Photo courtesy of Hot Rod Network. 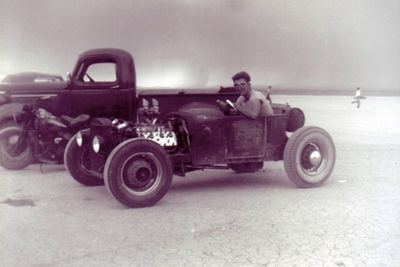 A photo of Dick in his newly required Modified at a dry lakes event. The modified once belonged to speed shop owner Karl Orr. Photo courtesy of Hot Rod Network. 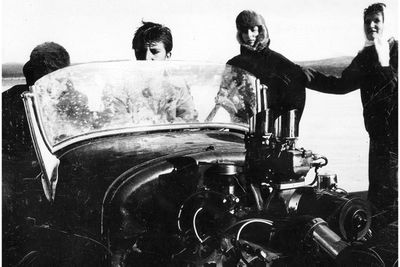 Dick and Lori in the Modified at a dry lakes event. Photo courtesy of Hot Rod Network. 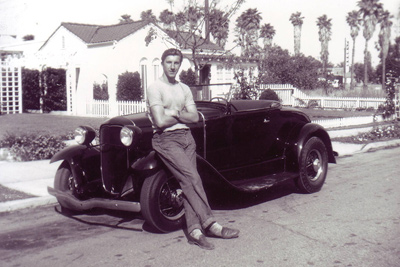 Dick in front of his 1930 Ford Model A roadster. Photo courtesy of Hot Rod Network.

Richard "Magoo" Megugorac of Peoria, Arizona. As a teenager Dick would build his modified's. He used to push them down the street so his dad wouldn't know, fire them up and off he would go. Dick bought a Modified from speed shop owner Karl Orr. As he couldn't get the modified legally registered, he used to borrow the license-plate from his dad's pickup before he took off.[1]

In his teenage days, Dick was the youngest member of the Santa Monica Low Flyers car club.[1]

Dick served several years in the Army, and he was stationed in Japan after WWII, during the Allied Occupation, as a mechanic instructor. After the war he married his one girlfriend and only true love Lois.[1]

In the early 1960s Dick and his brother-in-law Carl Riggen formed Riggen Slot Cars. In the mid to late 1960s Dick started building cars out of his back garage in Canoga Park. Dick handled the fabrication, bodywork, paintwork and final assembly, while Lois handled the interior work.[1]

Dick and Carl sold the slot car company in the early 1970s, and after that Dick became really serious with building hot rods in his shop called Magoo's Street Rods.[1]

Please get in touch with us at mail@kustomrama.com if you have additional information or photos to share about Dick Megugorac.