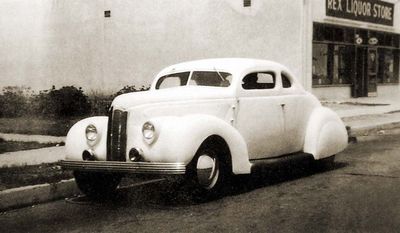 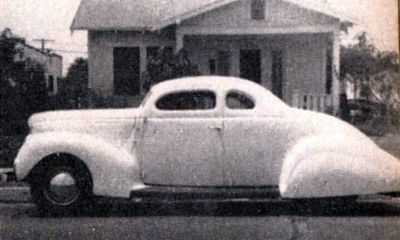 This photo of the car was published in Motor Trend November 1949. 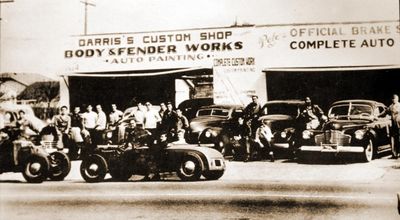 A group of cars outside the "Barris's Custom Shop" on 7674 Compton Avenue in Los Angeles. Dick's coupe can be seen below the "Auto Painting" sign. 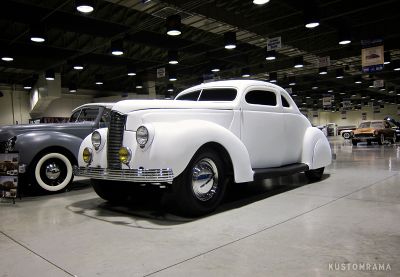 The Dick Fowler Coupe at the Customs Then and Now exhibit at the 2011 Grand National Roadster Show. Photo taken on the Thursday set-up day by Sondre Kvipt. 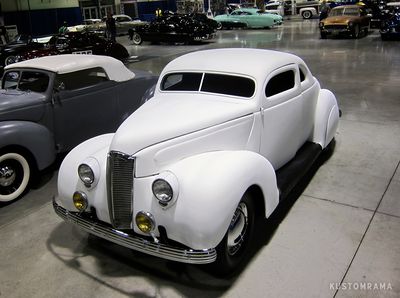 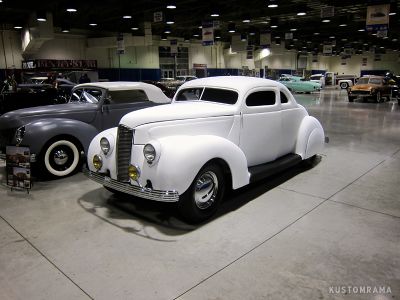 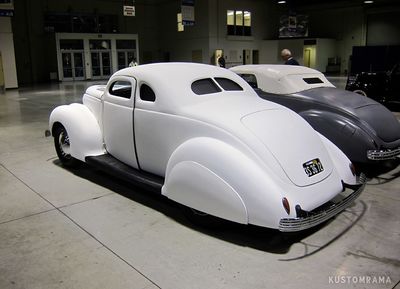 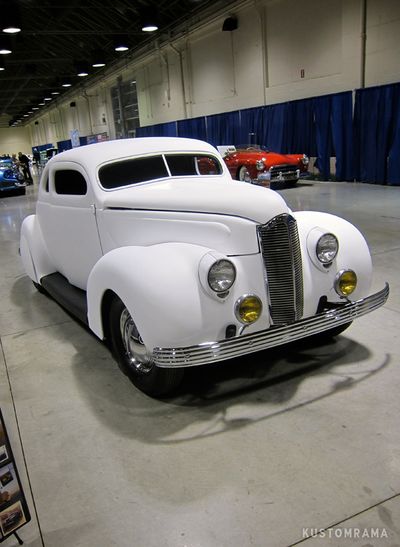 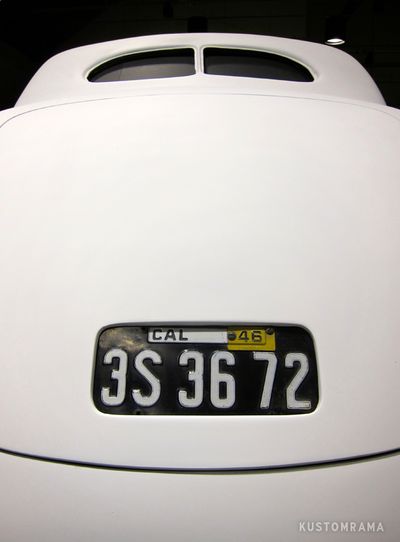 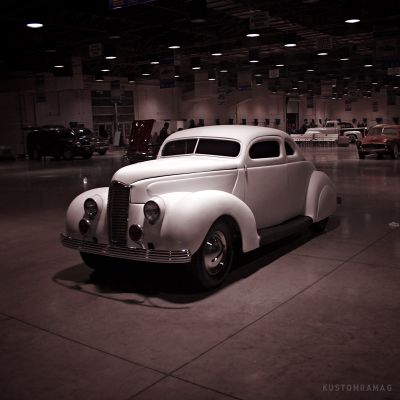 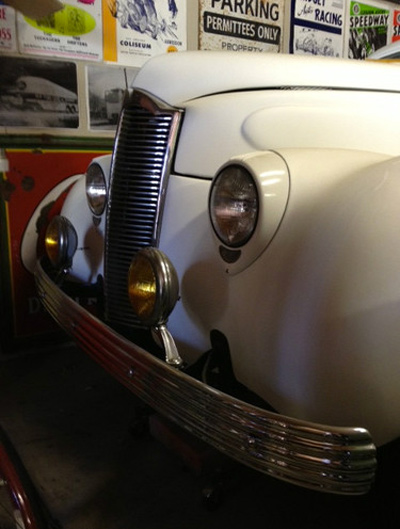 The coupe as it sat when it was advertised for sale on eBay in January of 2013. 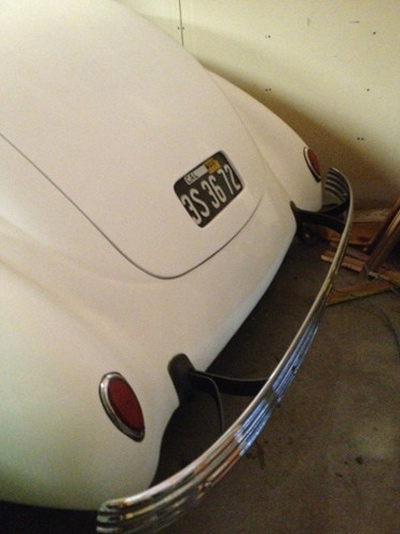 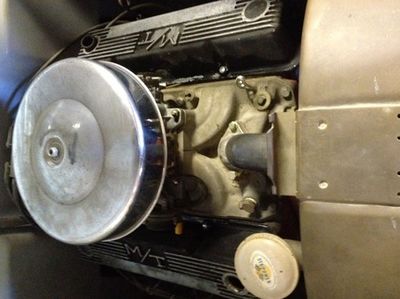 Robert Lomax installed the small block Chevy engine in the car after he found it in 1979. 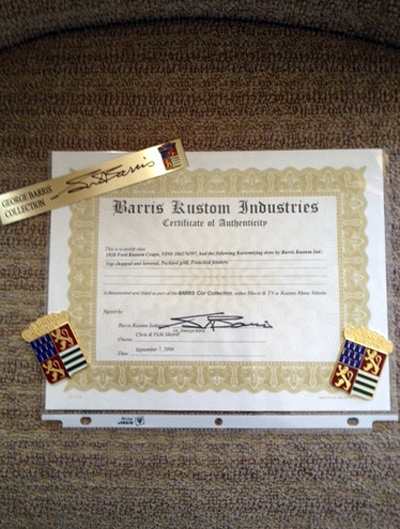 A "Certificate of Authenticity" by George Barris. 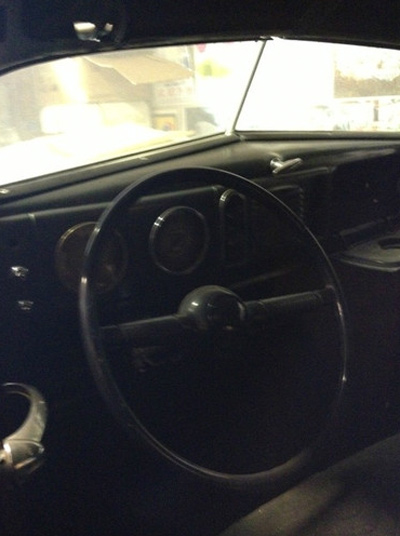 1938 Ford Coupe restyled by Barris Kustoms at their 7674 Compton Ave. shop for Dick Fowler of Southgate, California.The car was built between 1946 - 1948. Dick's coupe was chopped by Sam Barris, the drip rails were removed and the top door corners were rounded. The body was channeled, dechromed and sealed In. When the top was chopped by Barris, tar and burlap were applied on the inner skin of the roof. The hood was louvered, and the hood and hood sides were modified to accept a 1942 Packard Clipper grille. A set of accessory headlight bezels for seal beams were installed up front. The license plate was recessed in the deck lid. The stock bumpers were replaced by 1937 DeSoto ripple bumpers and a pair of Appleton fog lights were mounted above the front bumper. The car featured 1940 Ford front brakes and wheels. Single bar Flipper Hubcaps on blackwall tires and aftermarked skirts wrapped up the style. Dick dated and married the most beautiful gal at Southgate High School, and during the golden post war years he was part of the "Fox Florence" guys. They were called that because Dick and his buddies hung out at the all new Fox Theatre on Florence Ave. in Los Angeles. By the early 1950s Dick became a crane operator, and it is not known what happened to the coupe after that.[1]

In 1979 Robert Lomax found the car advertised for sale in a small Los Angeles newspaper ad. The ad supposedly read something like "Old Custom Rod 1938 Ford Coupe For Sale". Robert drove out to Sunland, California to check out the old custom. He looked it over real good and figured out it was an old custom from back in the days. In the late 1970s not too many people cared about old customs, but Robert appreciated the car, so he bought it and brought it home. Back home Robert carefully took the car apart. He cleaned up the chassis and added a very healthy High Performance 350 Chevrolet engine and turbo transmission. Robert had also certain parts rechromed before he for no appearent reason stopped the project and let the car sit until the late 1990s. In the late 1990s Alex Idzardi's dad found and bought the car during a yard sale that Robert had at his home. The car sat in the Idzardi garage for many years, and it wasn't until Alex assisted the 2011 "Customs Then and Now" exhibit at the Grand National Roadster Show that the family got inspired to fix the car up in time for the event. While carefully sanding the coupe they came upon all of its earliest colors. The car left the factory painted black. When it initially hit the streets of Los Angeles a custom it was covered in white primer. Soon after that it was painted dark navy blue. later on in life it was painted Jade green. After being hidden for many years, the restored version of the coupe made its debut at the 2011 "Customs Then and Now" exhibit at the Grand National Roadster Show.[1]

In January of 2013 the car was listed for sale on eBay. The asking price was $ 70,000.[1] Kurt McCormick bought the car, and the listing was ended before the auction went out. In May of 2017 the car was being restored at Manns Restorations.

Please get in touch with us at mail@kustomrama.com if you have additional information or photos to share about Dick Fowler's 1938 Ford.