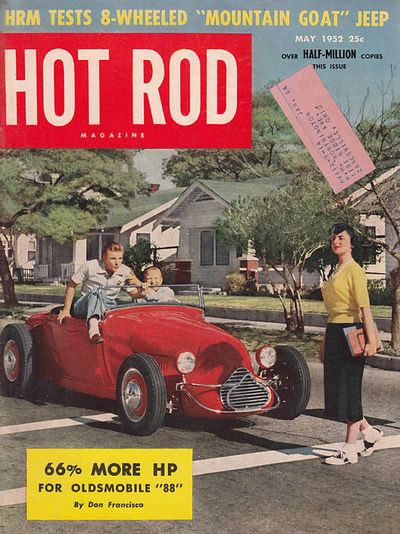 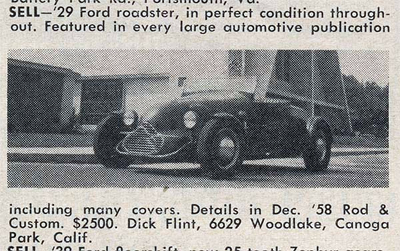 1929 Ford Model A roadster built by Dick Flint, a Glendale Sidewinders member. After collecting two or three Model A Roadster bodies, Dick was able to assemble one complete roadster. The Dick Flint Roadster featured a distinctive hand formed aluminum midget race-style track nose and belly pan. The nose, belly pan, hood and bodywork on Flint's car was done by Neil Emory of Valley Custom. The body lines were smoothed in order to resemble a 1932 Ford. Dick made the grille and nerf bars on the car, and did all of the mechanical work. Dean Batchelor, who worked part time at Valley Custom, helped Dick design the car, especially the track nose. To get the right stance, the frame was Z-ed in the rear.

Inside Dick modified the car with an Auburn gauge panel. He removed the insert, plated it, and stuffed it with 2 5/8" Stewart-Warner gauges. The car also featured a steering wheel from a 1940 Ford.

In May 1952 the Dick Flint Roadster was featured on the cover of Hot Rod Magazine. In the cover you can spot Dick behind the wheel, and his friend Bob Roddick making a leap for UCLA co-ed Harriet Haven.

In Hot Rod Magazine May 1959 the Dick Flint roadster can be found in the classified section of the magazine. Dick is then asking $ 2,500 for the car. The car was sold to Duane Kofoed, a founding member of the L.A. Roadsters in 1961. Duane installed a Chevy V8 in the roadster, and drove it regularly on LA Roadster runs for the next decade. While Duane owned the car, the roadster was featured in Alex Xydias Hot Rod Story video, and several '60s album covers. Duane later sold the car disassembled to its previous owner, Don Orosco. Don Orosco, owner of DBO Motor Racing restored the car after being hidden for several years. After restoration, the car went on to win the Hot Rod Class, and the Dean Batchelor Memorial Trophy at the Pebble Beach Concours d'Elegance in 1999. Dick Flint's roadster was the second car to win first place in the hot rod class, Doane Spencer's 1932 Ford Roadster was the first.

Please get in touch with us at mail@kustomrama.com if you have additional information or photos to share about Dick Flint's 1929 Ford.