Detroit vs the Customizers 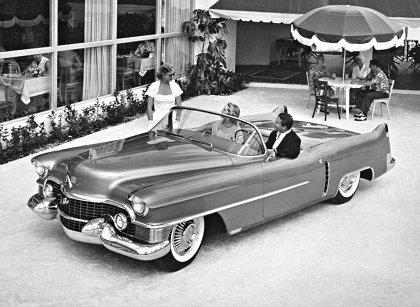 Who's Copying Whom
Back in the mid fifties customizers from all over the United States claimed that Detroit designers were copying their custom treatments. In the June 1956 issue of Rod & Custom magazine there is a 6 page long feature covering this subject. The story starts with a letter written by Ken Fermoyle, being a spokesman for the designers in Detroit. Ken's letter is followed up by an answer from customizing legend George Barris. Ken states in the beginning of the story that "Detroit stylists don't resent the charge that they copy ideas from customizers, they just don't pay much attention to it. When pinned down, they might even reply that sometimes the copying runs the other way!" In the text written by Ken Fermoyle, Bumper Exhaust Ports are used as an example. He says that customizers cry out that "Detroit stole 'em from us and we got pictures to prove it". "Then they show you a picture of a custom built in '52 or '53. Cadillac used this idea in 1952, which means the cars were introduced late in 1951 - and were designed two years or so earlier! How many customs featured this idea in 1949 or earlier? Back in those days a hot custom was a pre-war or early post-war job chopped, channeled and liberally leaded coupe that would be regarded as pretty Mickey Mouse."

Ken states that "Detroit has no quarrel with customizers and the customizers shouldn't have any with Detroit. Where would they be if Detroit didn't supply them with the raw material?"

In the second part of the story George Barris answers Ken. George starts it all by stating that many customizers are of the opinion that "Detroit stylists are lifting ideas hatched by car-conscious enthusiasts and applying them to their production models. Then when new-car announcement time rolls around, they point proudly to their 'original ideas'."

George Barris uses the placement of license plates as his first example. Stating that customizers were the first to place the license plate in the center of the car's stern, illuminating it with an added accessory light. Detroit followed, and customizers answered Detroit by inserting the plate into a hole in the deck. Detroit once followed, and the customizers lead on by placing the rear plate on the bumper in order to give the car an illusion of width and lowness. And as we all know, Detroit once followed the customizers on this treatment. "Far too many similarities are cropping up between Detroit's offspring and the customizers years-old ideas to make it appear that we are copying them. Look at flat hoods -"pioneered" by Ford in'49, pushbutton-operated accessories, electrically controlled deck lids, concealed gas fill pipes, low roof lines, thin body lines, air scoops. No I'm afraid that it is erroneous to say that we are doing the borrowing."

At the end of the story, George Barris ends the discussion by saying: "Actually, we don't have an argument with the Detroit people. We realize they are seriously handicapped by orders from top brass, that costs must be kept within limits, that there are definite legal restrictions that the designers must fit. But the least Detroit could do is give a little credit where it's due!"

In this section we encourage people to post styling similarities between Detroit styled cars and custom cars, in order to design who is copying who!

The Golden Sahara built by George Barris in 1954, beat the Lincoln Mark II with its exposed spare molded to the deck. The 1955 Chrysler Flightsweep II Concept Car did also feature a fake spare cover on the trunk. 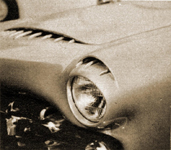 The Barris built 1947 Studebaker he started building in 1951, rolled out of his shop 2 years prior to Pontiac's introduction of the famous airscoops over the headlights.

Please get in touch with us at mail@kustomrama.com if you have additional information or photos to share about Detroit vs the Customizers.