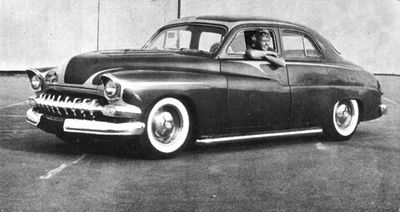 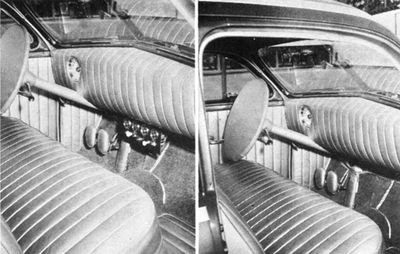 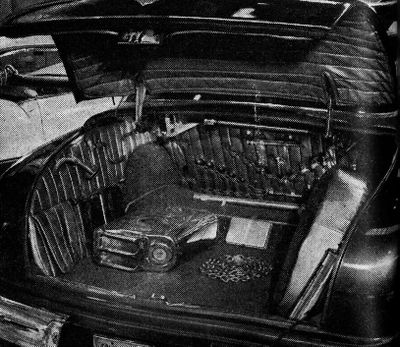 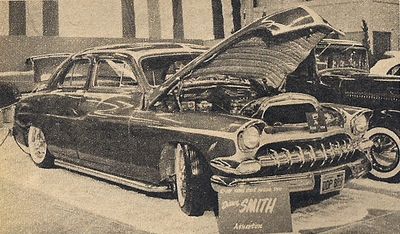 A photo of the Merc taken at the 1959 Sacramento Autorama. 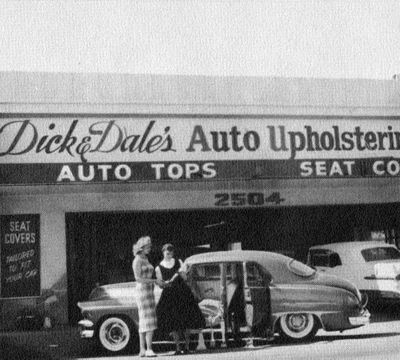 A photo of Dawn Smith and Linda Merillat taken in front of Dick and Dale's Auto Upholstery. The 1950 Mercury belonged to Dawn, and the photo appeared in an ad for Dick & Dale's in the 1959 Sequoia Hi Year Book.

An ad for Dick and Dale's Auto Upholstery from the 1959 Sequoia Hi Year Book.

1950 Mercury 4-door owned by Dawn Smith of Redwood City, California. Dawn helped out a lot on the bodywork on her ride. All the factory trim on the hood doors and deck lid were removed, the car was operated by electric solenoids.[1] The hood was peaked shaved and four rows of louvers were set in a curved pattern. All of the body seams were filled. It featured reversed chrome wheels and three-inch functional side pipes [2] 1957 Chevrolet headlight rims were inserted in the extended front fenders. The grille shell was reshaped and modified with a 1954 Chevrolet grille bar with extra set parking lights installed. Both bumpers were stock Merc units with the center section removed to reveal a rolled pan and license plate mounting. The rear end featured stock frenched taillights.[3] The engine room was completely sanitized. It was painted Emerald green with silver scallops once completed.[1] The interior was completely upholstered in pleated silver Naugahyde with silver-trimmed green carpets, the entire dashboard was covered except the speedometer. The other gauges were not discarded, these were mounted on a flip-up panel beneath the dashboard.[2]

In 2020 Larry Ewing told Sondre Kvipt of Kustomrama that he remembered seeing Dawn's Merc at Dick and Dale's Upholstery Shop late in 1958. "She was in the same high school as me, Sequoia, class of '59. She was out of my league as I was a shy guy and never approached her." According to Larry, Dawn was a trendsetter. "The only female in a male-dominated world at the time." Larry recalled hearing or reading that her dad was killed in WWII, "maybe at Pearl Harbor, and this Merc was in his honor."[4]

Please get in touch with us at mail@kustomrama.com if you have additional information or photos to share about Dawn Smith's 1950 Mercury.