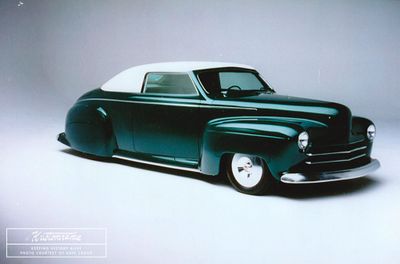 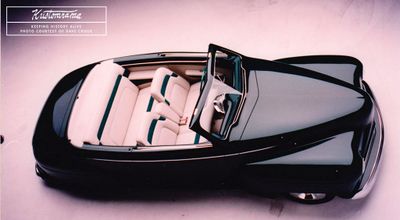 The front fenderskirts were engineered to swivel with the front wheels in turns. Photo courtesy of Dave Crook. 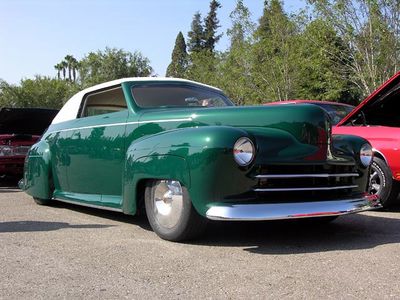 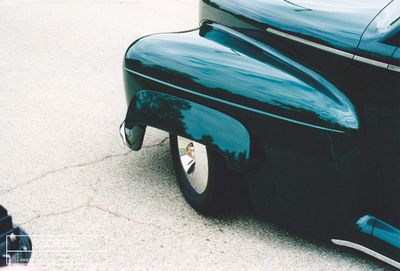 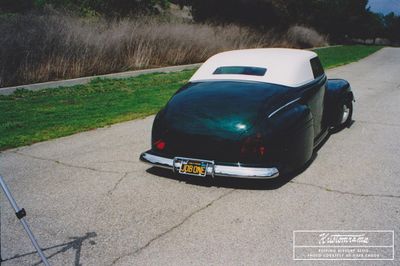 1947 Ford Convertible designed by Harry Bradley for Dave Crook. Known as "Job One," Dave's 47 Convertible showcases the work of legendary GM stylist and designer Harry Bradley and builder Dave Crook. The car has been featured twice in the Rodder's Journal, the first time in bare metal to display Crook's work, and then in fully finished form.[1]

Among its numerous modifications, the car's fenders and front and rear valences were molded to the body. All seams were filled with lead. The deck lid, fenderskirts, glass, and chrome trim were flush mounted, providing a modern and clean look to the whole car. Among the most unique features are the front fender skirts, which were engineered to swivel with the front wheels in turns. The completely handcrafted interior was highlighted by a 1961 Chrysler gauge cluster at the center of the hand-formed dash, which also incorporated inside rearview mirrors, a custom steering wheel, and knobs, Vintage Air outlets, and controls for the adjustable air shocks and hidden Sony sound system. The front seats were modified 1966 Buick Riviera units. The rear seat was custom-built, all covered in Oyster leather with Green Ultrasuede inserts on top of matching wool carpeting. The windshield frame was altered to provide clean sweeping lines from the cowl into the roof, and the low-profile lift-off top was finished with Oyster upholstery to match the interior. Job One packs Cadillac power, a 1970 Cadillac Eldorado 500 CI big-block V-8 with a .060-inch overbore, 10.0:1 compression HEI ignition, a 4-barrel carburetor, and a Clay Smith hydraulic cam. Finished with chromed Caddy valve covers, a 1953 Cadillac air cleaner and custom two-inch exhaust with Flowmaster mufflers, it was backed by a GM Turbo automatic and cooled with a Griffin two-row aluminum radiator.[1]

Please get in touch with us at mail@kustomrama.com if you have additional information or photos to share about Dave Crook's 1947 Ford.