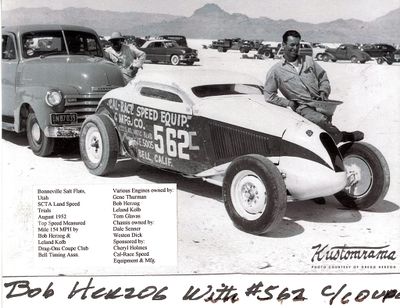 A photo of Bob Herzog next to Dale and Weston's coupe. The photo was taken during the 1952 Bonneville Nationals, and Bob, Dale, and Weston were all members of the Drag-Ons car club. Photo courtesy of Gregg Herzog. 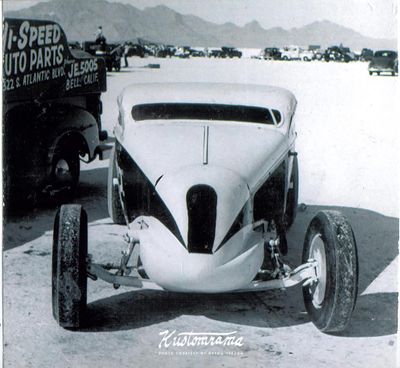 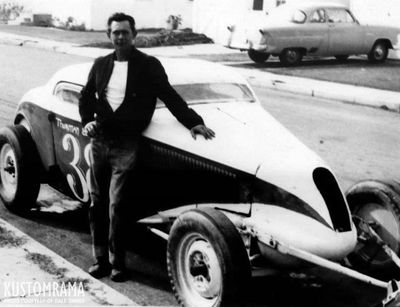 A photo of Dale with the coupe taken in 1953. Photo courtesy of Dale Sinner.

1934 Ford three window coupe owned by Drag-Ons car club members Dale Sinner and Weston Dick of Bell, California. In October of 2016 Dale told Sondre Kvipt of Kustomrama that the coupe was chopped, channeled and fit with an Indy type nose: "We built the car with help. I had this car with a buddy, and we clocked it at El Mirage at 130mph in 1950. " Back then there wer two speed shops in Bell, Bell Auto Parts and Hi-Speed Auto Parts. "When I returned from the military and converted our car for drag racing, Hi-Speed Auto Parts sponsored us to some extent. At that time no one had a sponsor but us. You will note in one of the pictures you have, there is a pickup truck that says Hi-Speed Auto Parts on the side."[1]

After Dale returned from the military h did not go back to the job I had before being drafted. "Instead I went to work for a company that made hot rod parts. The company was Harman-Collins. They ground cams and made other parts for Ford engines. They also had a dyno there and tested engines. Later on they designed a magneto for Ford engines. They sold a lot of these because it eliminated the use of an older ignition system. I left there after a short time and went back to my old job."

Please get in touch with us at mail@kustomrama.com if you have additional information or photos to share about Dale Sinner and Weston Dick's 1934 Ford.