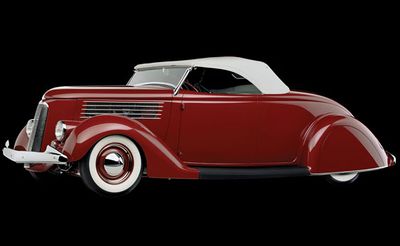 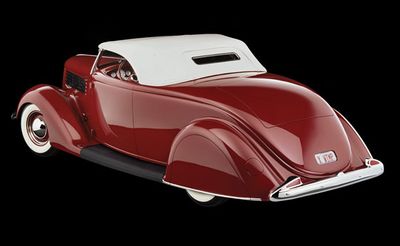 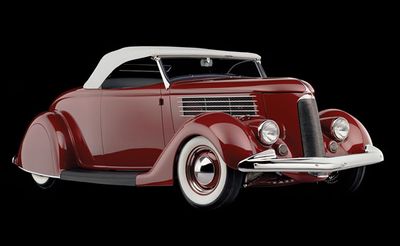 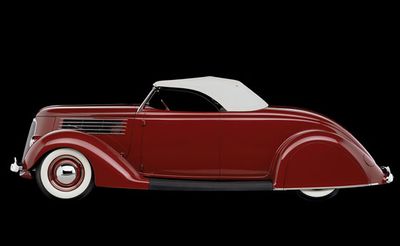 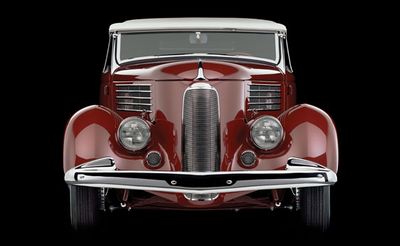 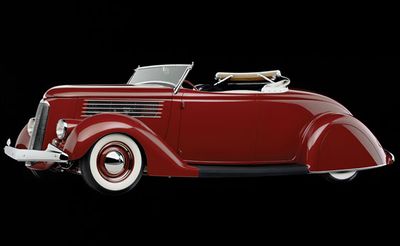 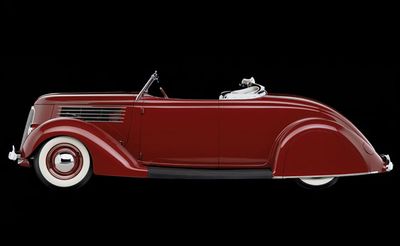 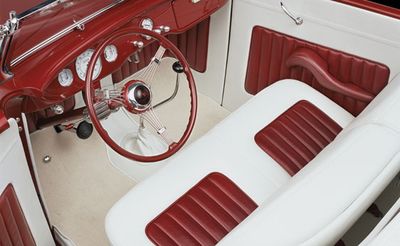 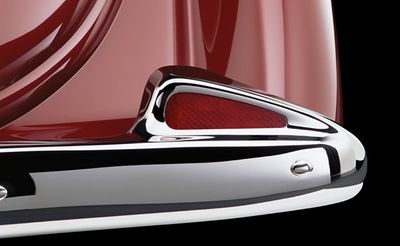 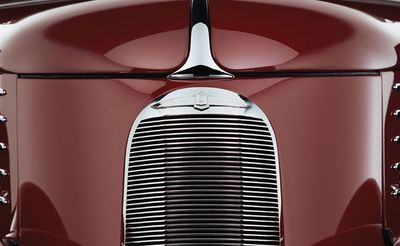 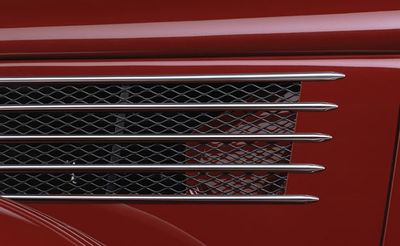 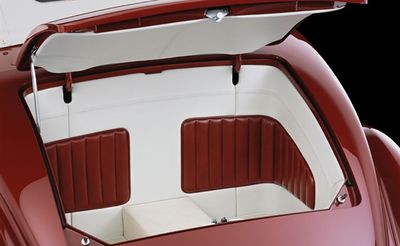 1936 Ford Roadster restyled by Donn Lowe of Lowe Kustoms in Oregon City, Oregon for Creighton Helms. Creighton commissioned Donn to build him a custom that could reflect the cars he saw prowling the streets of Chicago during his youth. Donn eliminated the rumble seat in favor for a full size trunk. The rear fender skirts were hand-fabricated and made to look like 1939 Lincoln Zephyr fender skirts[1] and the cowl was hand-built from the best parts of three donor cars. Up front 1940 Chevrolet headlights were integrated in to the fenders. A hand-made grille insert incorporated a narrow 1939 LaSalle grille. The front and rear bumpers are subtly modified 1940 Oldsmobile bumpers. The rear bumper has integrated taillights in the bumper tips. The license plate has been frenched and windowed in the rear. When the bodywork was done, the car was finished in metallic maroon lacquer and fit with a speedster-style Bob Lee top, including hidden snaps and padded seams. The interior was upholstered by Jim Griffin of Bend, Oregon and includes a split-back bench seat with white and maroon leather, along with white Wilton wool carpeting, a theme continued to the trunk compartment. The stock dash was fit with white-faced factory-style instruments, while the banjo steering wheel was adapted to accept a standard horn button from a 1940 Ford. Wiring was provided by Painless Performance of Fort Worth, Texas.[2]

Rounding out the mechanical package, the roadster featured a Ford C4 automatic transmission driving a 1930s-vintage Ford banjo-type rear end with 3.54:1 gears, semi-floating axles and open drive by Hot Rod Works of Nampa, Idaho. The front suspension featured a forged front axle by Chassis Engineering with stock-type 1937-1941 Ford spindles, while Pete & Jake’s provided the bolt-on steering arms and wishbone split kit and Ken Fenical’s POSIES contributed the reversed-eye spring. Braking has been upgraded with a hydraulic system, with a Pete & Jake’s dual-circuit master cylinder controlling a set of front disc brakes with vented front rotors and four-piston calipers within Buick-style drums that are complete with Ford-style backing plates, by So-Cal Speed Shop. A pair of Ford Bronco 11-inch drums handle rear braking. The roadster rolled on a set of 1946-1948 Mercury steelies with 1940 Ford-style hubcaps by Wheel Vintiques and shod with a set of BF Goodrich-style tires from Coker Tire.[2]

Please get in touch with us at mail@kustomrama.com if you have additional information or photos to share about Creighton Helms' 1936 Ford.