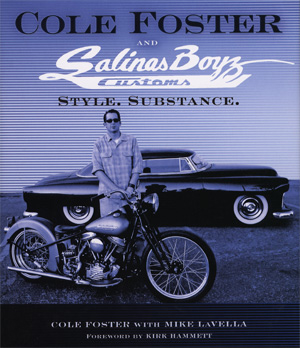 For nearly twenty years Cole Fosters Salinas Boys shop had been rolling out some of the tightest hot rods and customs to hit the road, along with an ever-increasing number of super-clean bobbers. To date, the pinnacle of their achievement has been the 36 Ford that Foster and Salinas Boys built for Metallica lead guitarist Kirk Hammett, a four-year build that an awestruck hot rod press documented and celebrated every step of the way.

This book offers an inside look at the genius behind the vehicles. Mike LaVella goes behind the scenes with the often-outspoken Foster to find out what really makes him tick. Full of photographs chronicling Coles life from his days as a California skateboarder to his emergence as a master craftsman, the book traces his aesthetic back to the early influence of his father, drag racing Hall of Famer Pat Foster. Here are the most-photographed and talked-about vehicles the Salinas Boys have turned out since opening shop in 1990, with the stories behind each.

The book also features fabulous color photographs of Kirk Hammetts' 1936 Ford (in both its bare-metal and final black configurations), Mike Ness' 1954 Chevrolet, Cole Foster's 1953 Chevrolet shop truck (recently sold to Jesse James of "Monster Garage" fame), Cole Foster's 1954 Chevrolet Belair hardtop, and more. Readers also get a close-up look at some of the bikes the Boys have produced, including the now-legendary "blue bobber" and Beautiful Loser, which appeared on Discovery Channels "Biker Build Off." With a foreword from Hammett and sidebar testimonials from Fosters admirers--including Willie Davidson, Chip Foose, Jesse James, and Jimmie Vaughan--this is the official word on one of the worlds great custom builders.

Please get in touch with us at mail@kustomrama.com if you have additional information or photos to share about Cole Foster and Salinas Boyz Customs: Style. Substance..