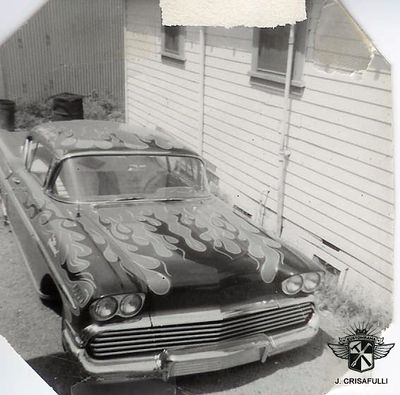 A photo of Chuck's Impala taken in the driveway behind Flyers Body Shop were Joe Crisafulli gave the car a flame paint job. This photo was taken before Chuck installed dual spotlights. Photo from The Joe Crisafulli Scratchbook and Photo Collection. 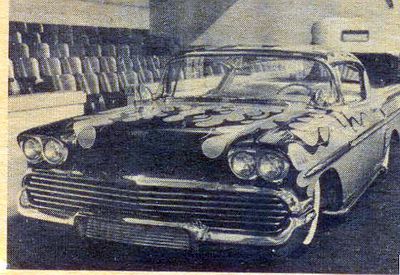 Chuck's Impala at the 1959 San Jose car show in the Civic Auditorium. Chuck installed dual spotlights on the car right before the show. 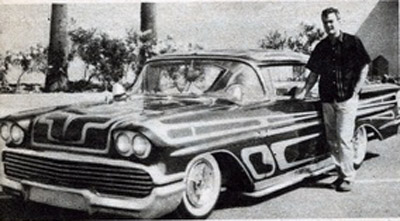 The second version of Chuck's Impala featuring a scallop paint job by Joe Crisafulli. This version was shown in Car Craft January 1960.

1958 Chevrolet Impala owned by San Jose Rod and Wheelers member Chuck Burkart of San Jose, California. Chuck did everything but paint to the car himself, and the Impala was lowered, nosed, decked and fit with a custom tube grille, custom hubcaps, a custom interrior and side exhaust stacks. Chuck was Frank Goehring's best friend. Frank owned a radical 1958 Chevrolet Impala that Joe Crisafulli had restyled at Flyers Body Shop in San Jose. After Chuck had customized his Impala, he had Joe Crisafulli apply a flame paint job over the stock color in 1959. Joe believes the stock color was silver, and that the flames were done in multi colors black, silver, green and red. After Joe had painted the car, Chuck installed dual spotlights on the car. Later on in 1959, Joe Crisafulli repainted the car, and applied a scallop paint job similar to the one he gave Frank Goehring's 1958 Chevrolet Impala. At the time, Joe painted a car every two weeks, so he can't remember if he painted Chuck's Impala before or after Frank's Impala. In 1960 Chuck's club, the San Jose Rod and Wheelers, won the second annual Car Craft Magazine "Car Club of the Year". The club and their cars were presented in Car Craft January 1960. A photo of Chuck's Impala was shown in that issue, but Chuck's name was misspelled "Chuck Cortado".[1]

Please get in touch with us at mail@kustomrama.com if you have additional information or photos to share about Chuck Burkart's 1958 Chevrolet.