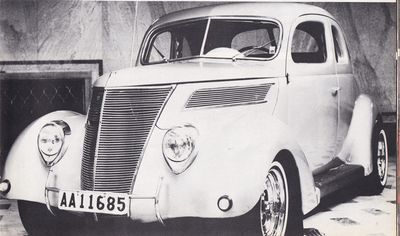 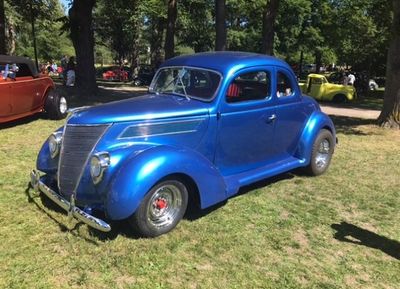 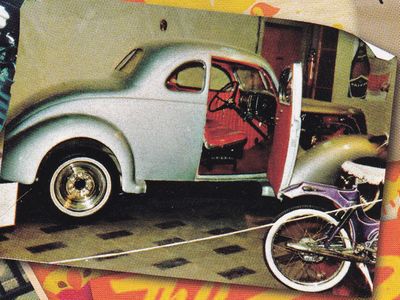 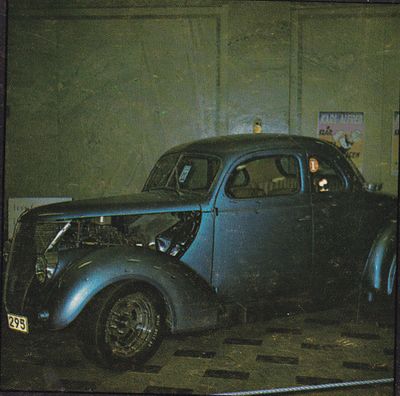 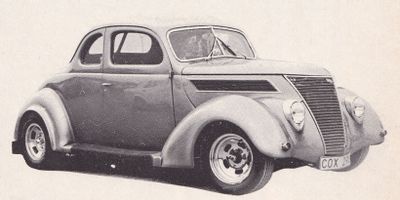 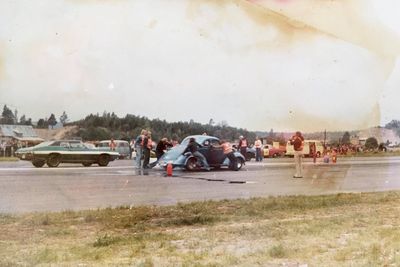 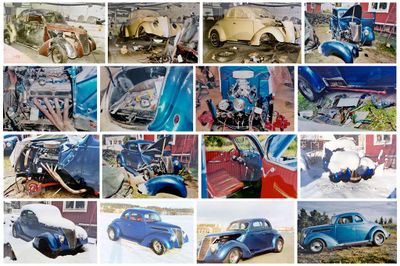 Erik Henriksson of Hudiksvall bought the car in 1992. He started an extensive restoration of the car after the fire and got it driveable again. Click here to see Erik's pictures from the restoration.. 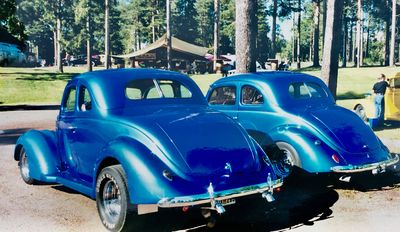 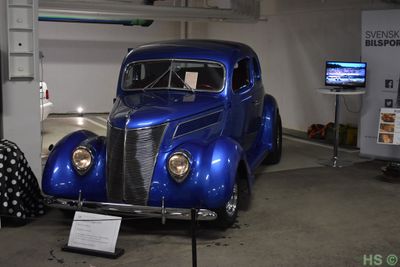 Christer 'Chrille' Lundberg from Stockholm bought this 1937 Ford coupe in 1960 for 200 SEK. It was in miserable shape and Christer restored it to excellent condition and succeeded to get it approved.


The engine first was a 241 Dodge Hemi from a crashed car that Christer got for free.
Thereafter a 392 Hemi and automatic transmission from Chrysler 1959 was fitted precisely within the hood sides.


Chromed wheels from Astro Custom. First Christer painted the car white but later silver.
The interior is all tuck'n'roll in red vinyl with seats from a Ford Thunderbird 1964.
The windshield wiper shafts are below the front windows which indicates the window frame is fixed and not possible to open.


Christer joined several other Swedish hotrodders to a trip to Italy, in the summer of 1964.
He also attended (and raced) at the "First Go" - the first dragracing event at Anderstorp Raceway in 1968.
Christer was an active car builder at that time with many projects so he sold the car in 1968-1969. It is not clear to who
and the history upcoming years.


In 1973, the car attended Hot Rod Show with Raymond Öström as new owner. Now with a 413 ci Chrysler bored to 426 ci.
Ansen wheels and a new paint by Frittes Billack. It appears the car got the back fenders widened to cover the wheels.


The car got a nick-name among other rodders as "Chrille Lundberg's old one" when nobody really knew the current owner.


Shortly therafter the car was bought by dragracing driver ("Blue Swede") Tommy Svensson from Västerås. It then went to another dragracer Ryde Brundin in Östersund.


Probably the car was re-painted several times during this period since there were many layers of paint found in later restorations.


In 1974-1975 Janne Ström in Hudiksvall swapped his Chevy Nova for the Ford. Janne immediately pulled out the big and heavy Chrysler driveline and replaced it with a complete driveline from a crashed 1971 Ford Mustang. This involved a 302 ci smallblock, C4 transmission and 9" rear end.


The change made the car much lighter, better milage, performance and handling on the road.
Janne drove the car frequently over the years. Unfortenately, in 1992, it was slightly damaged in a garage fire.


After the fire, Erik Henriksson in Hudiksvall bought the car from Janne in August 1992. Erik's nickname is "PV-Erik" as he has several Volvo model PV.


He started an extensive restoration of the car and got it driveable again. See Erik's pictures of his work even outside in the cold and snow!


As the car was very much used and sometimes lacked garage Erik did another extensive restoration in 2013. The result was shown at several exhibitions.
At one meeting an elderly man checked the car thoroughly, so Erik asked him why.
It happened to be Christer Lundberg "himself" telling this was the car he built in the sixties! Very nice!


This is a good example of a strong survivor having a tough long life in fire, racing, rain and snow.


This also proofs the good solid work from all owners over time to prevent this Hot Rod to the future!

Please get in touch with us at mail@kustomrama.com if you have additional information or photos to share about Christer Lundberg 1937 Ford Coupe.