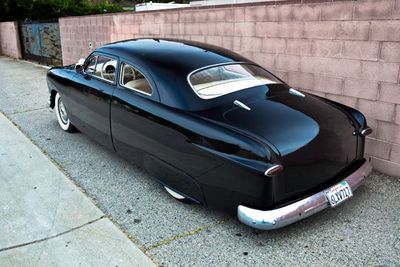 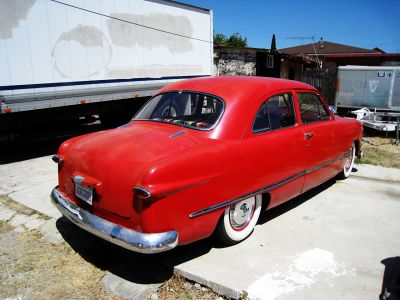 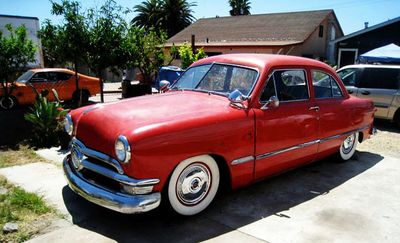 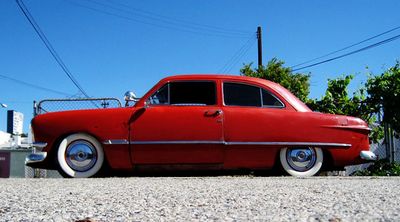 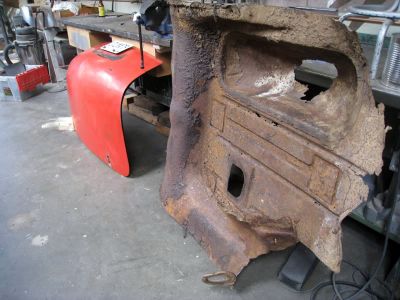 The rusted trunk floor that started the chop. Photo by Chris Casny. 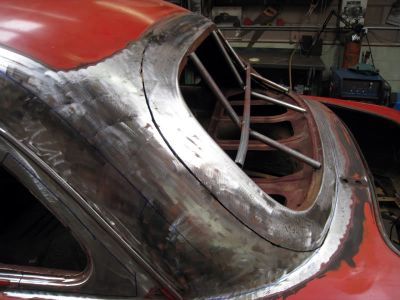 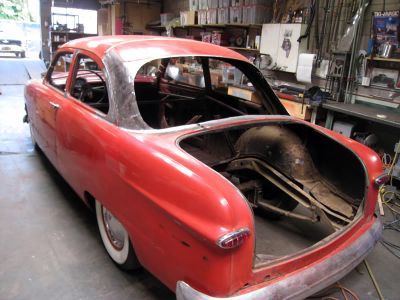 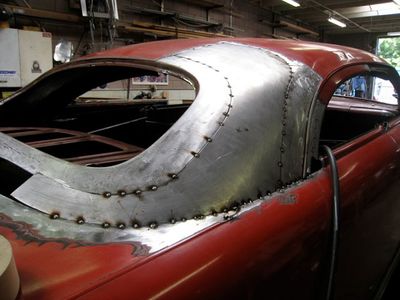 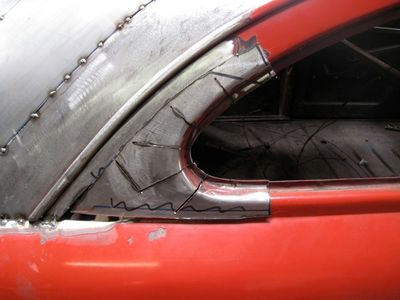 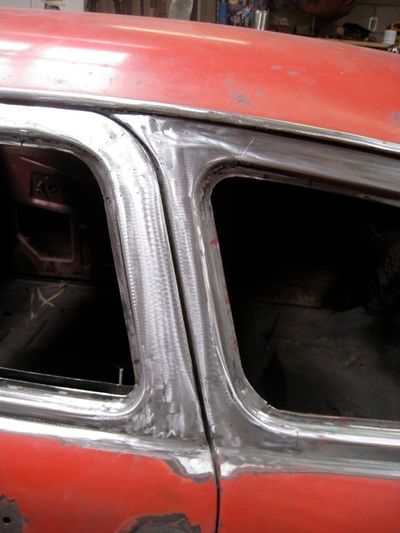 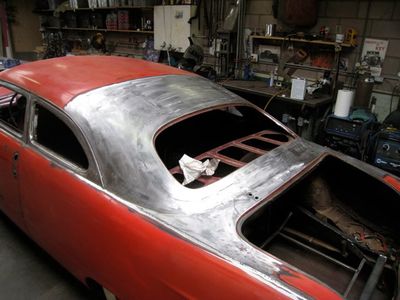 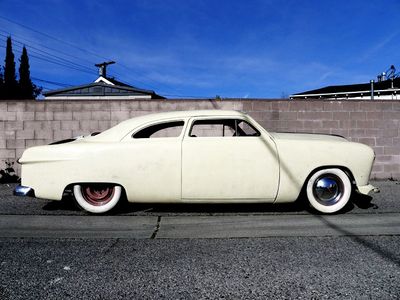 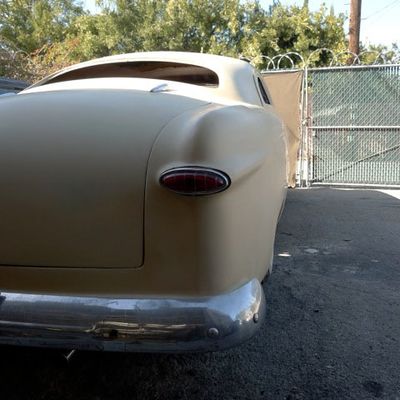 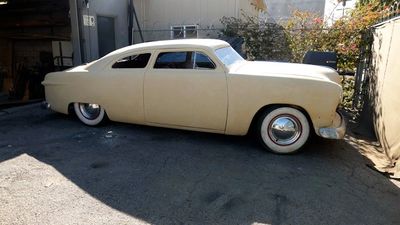 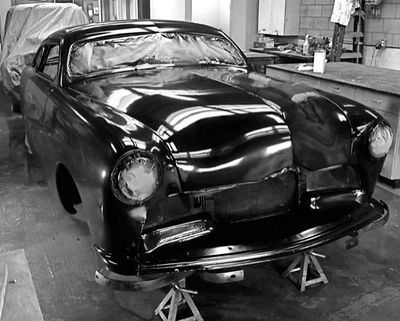 Chris painted it in his shop. Photo by Chris Casny.

As it appeared after Chris painted it with two gallons of black lacquer. Photo by Chris Casny. 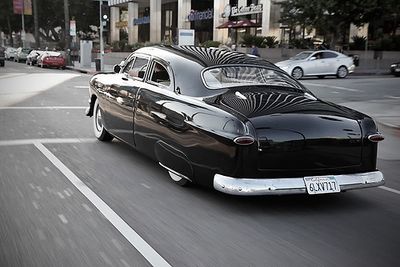 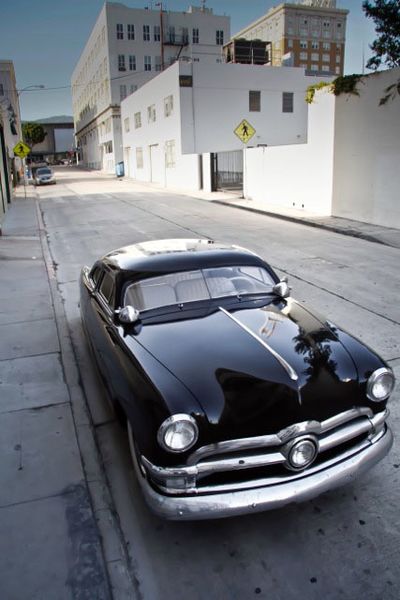 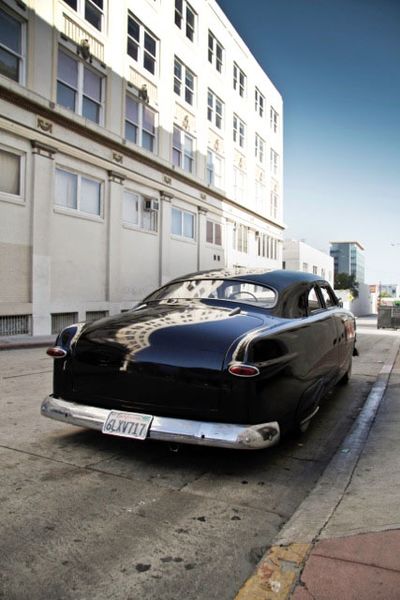 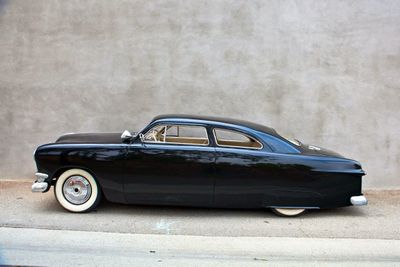 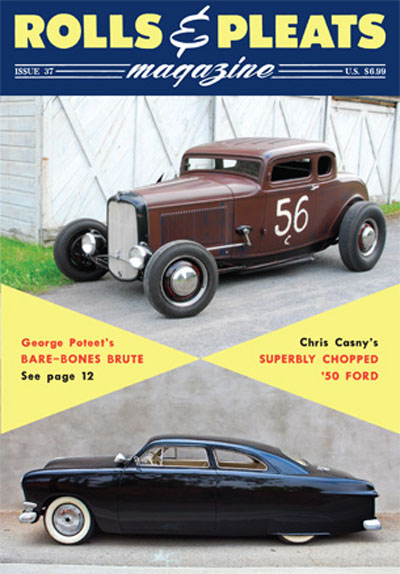 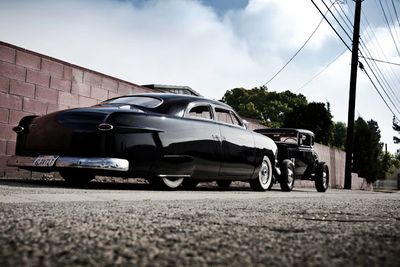 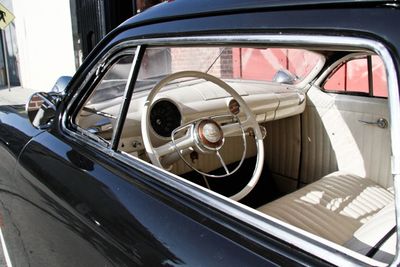 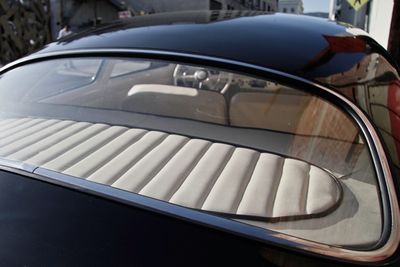 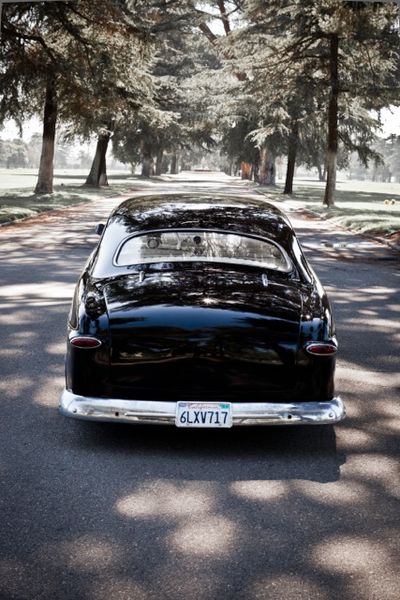 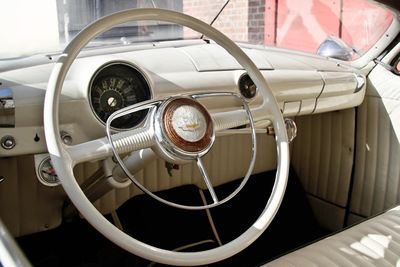 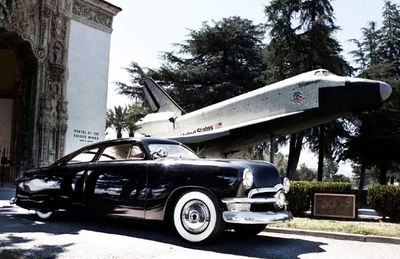 1950 Ford Tudor owned and restyled by Chris Casny of Hollywood, California. The shoebox was Casny's first custom. After he finished his 31' Coupe, the urge for another project began sizzling. This time he wanted to build a custom, and the car he was looking for was a 1949 - 1950 Ford. These were one of his favorite post-war customs, and Chris figured this would be a nice startpoint.[1]

In May, 2010, he managed to find a 1950 Ford in East Los Angeles that was listed on Craigslist. The car was running, but it had some rust and needed repair. The car sported a flathead, hooked to a manual transmission, 6 Volt system, and was basically stock. A deal was made, and Chris was now the happy owner of a fair 1950 Ford. At first, he did some mechanical repair in order to make it safe. He drove around with it in stock condition for about 3 months. He essentially did what Sam Barris did in 1949, he bought a brand new Mercury, drove around a little bit until he knew where to make to essential cuts to make it look good. As did Chris. The trunk floor was very rusty, and with the rear seat out, full tank of gas, driving on the freeway going 70mph, there was alot of noise coming from the rear. Chris looked behind him, noticing the gas tank, including the floor where bouncing up and down. He expected the whole floor to drop out any second, so he made it back to his place, removed the tank, and cut the floor out. One thing led to another, and suddenly it was chopped.[1]

The top was chopped 5" up front, and 6" in the rear. The roof was shortened a tad, and the gap between the top and deck lid was filled with sheet metal. Chris shaped the new sail panels on the english wheel. The b-pillars were slanted forward, in order to make the car appearing like it moved forward, instead of rolling backwards. He kept the rain gutters to keep the flow going. The car was nosed, decked and shaved for door handles. The T-bar moldings on the rear fenders were shaved with a sharp wood chisel, and welded smooth.[1]

The frame was notched by using one of Alex Gambino of Gambino Kustoms notch kits. Up front he cut the coils half a turn, and in the rear a few leafs were taken out of the rear suspension, and 4" lowering blocks were installed to achieve the right stance. Foxcraft skirts were installed as well. Chris was determined to do "everything" by himself, so he decided to do the bodywork and paint by himself. 2 gallons of black lacquer was applied, then he sanded and buffed it up to make it shine. The dashboard and window moldings were painted cream white.[1]

Chris stitched up a new upholstery for the shoebox, not only because of financial restrictions, but also for the urge to try it. He used an old roll of cream colored vinyl, along with a commercial sewing machine. He practiced making pleats until he was confident enough to tackle the door panels. With highly success on the door panels, the seats cover were sewn next, and suddenly the interior was done. The carpet was black with white piping around the edges. In the summer of 2011, the car was assembled and finished.[1]

Please get in touch with us at mail@kustomrama.com if you have additional information or photos to share about Chris Casny's 1950 Ford.