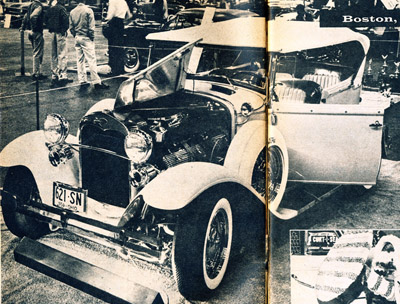 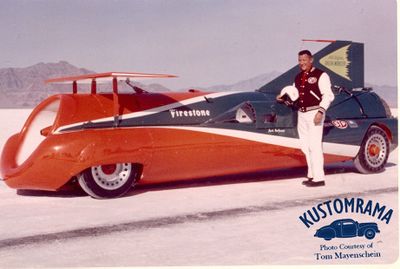 Charley with the Green Monster. Photo courtesy of Tom Mayenschein. 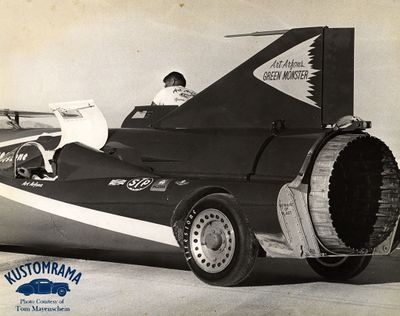 Charley sneaking into the spare seat to go for a ride. Art wasn't aware of it. During that run Art was trying for 500 mph. Three quarters thru the mile the car went a little out of control, and Art had to let up on the throttle. Because of that ride, Charley became the World's Fastest Hitch Hiker at 396 mph. Photo courtesy of Tom Mayenschein.

A newspaper story about Charley and his ride in the Green Monster. 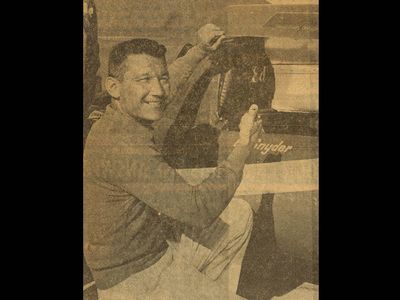 A photo of Charley from the newspaper article. 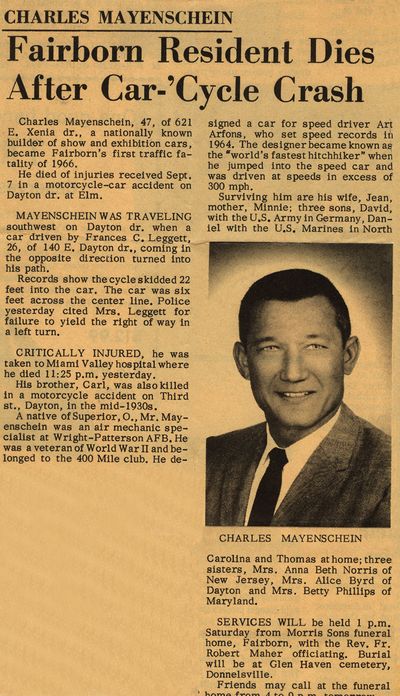 Charles Mayenschein of Fairborn, Ohio was a talented car builder and designer. In 1955 Charles, also known as Charley, won his first award at a car show with a 1930 Ford Model A roadster that he had hot rodded at home. He was sure he was going to win the show, but came second. Not satisfied with the second place, he told everyone there that he would be back in two years with a car no one would beat. In 1958 he hit the show circuit with the Fabulous Phaeton, an award winning 1930 Ford Model A Phaeton. The Fabulous Phaeton won trophies everywhere it went. In 1958 iIt won the "People's Choice" award in Louisville, Kentucky. In 1959 it won the "Best of Show" award at the National Champion Custom Car Show in Detroit. In 1960 Charley returned to Detroit and took home the "Best Hot Rod" award. 1960 was the first year they started giving out the "Best Hot Rod" award in Detroit.[1]

In 1959 Charley bought a 1931 Ford Model A Roadster that he started to hot rod. The plan was to use the roadster to haul the phaeton around to shows in an enclosed trailer. During the build, he told his son Tom that when the roadster was done it would be even better then the Phaeton. Charley was a good friend of Art Arfons, the legendary land speed racer. In 1961 Charley went to Bonneville with Art to try for a record with Art's Green Monster. They soon realized that the car couldn't hold enough gas to get the speeds they wanted. A new car was needed. Art ended up buying a J79 jet engine that Charley designed a car around. Charley worked as a jet/bomber mechanic at Wright Patterson AFB, and he made a wooden model for Art that they tested in the wind tunnel at Wright Patterson. Charley got so tied up with the Green Monster and chasing salt flat records, that he put the roadster project on hold for a while. In 1964, during the first speed run the Green Monster made on Bonneville, Charles sneaked into the spare seat of the Green Monster to go for a ride. Art wasn't aware of it. During that run Art was trying for 500 mph. Three quarters thru the mile the car went a little out of control, and Art had to let up on the throttle. Because of that ride, Charles became the World's Fastest Hitch Hiker at 396 mph. Later on, without Charley in the spare seat, the Green Monster went 536.76 mph at Bonneville for a world land speed record.[1]

September 7, 1966 tragedy struck, as Charley was killed in a motorcycle accident. He was traveling southwest on Dayton dr. in Fairborn when a car coming in the opposite direction turned into his path. Charley's widow sold the Phaeton and roadster project in 1970.[1]

Please get in touch with us at mail@kustomrama.com if you have additional information or photos to share about Charles Mayenschein.