From Kustomrama
(Redirected from Blue Magic)
Jump to: navigation, search 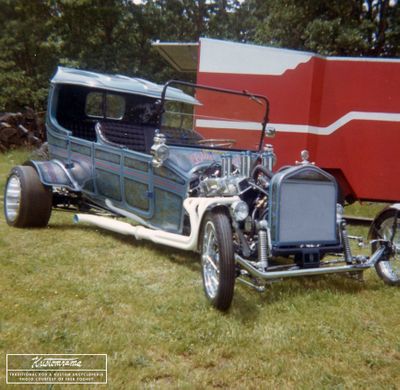 John's last build before he passed away was a 1915 Ford Model T Touring with a solid top over the back seat, like a chauffeur-driven limo. Known as the Blue Magic, this radical build ran a hot Chevrolet 327 engine with a Hilborn fuel injection. Photo courtesy of Fred Toohey. 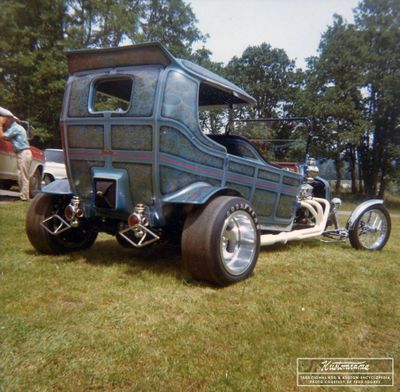 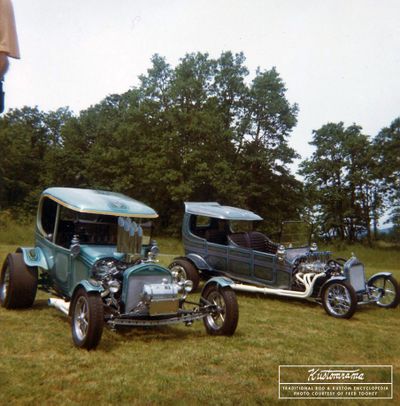 The Ice T and The Blue Magic. Fred's stepmother sold both cars after his father passed away. Photo courtesy of Fred Toohey. 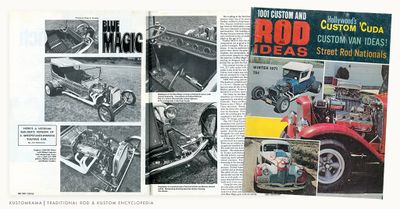 Blue Magic was featured in 1001 Custom and Rod Ideas Winter 1971, after Toohey had passed away. Jim Matthews penned the story, describing John's most famous build as "a veteran builder's version of a sweepstakes-winning touring car."

A veteran builder's version of a sweepstakes-winning touring car

"A veteran builder's version of a sweepstakes-winning touring car," that's how Jim Matthews described the Blue Magic when it was featured in 1001 Custom and Rod Ideas Winter 1971. According to the story, John liked to have his engines and other mechanical components run as good as they looked. "It was his ambition to build a sweepstakes winner and in three whos this great effort won two People's Choice trophies, two sweepstakes, three first places and special achievement plaques for engineering."

Shelby tubing was used to build a 114 inches frame with a tread of 47 inches. John fitted it with reworked early Ford suspension. He took the rear suspension from a Chevrolet. It ran Monroe chrome solid shocks and 1948 Ford spindles. The steering gear was taken from an MG. The rear traction bars had a triple "Z" design. The front radius rods were chromed.

John chopped and channeled the Touring body before he designed and fabricated the top and rear spoiler. A limousine effect was gained by the rear windshield to protect back seat passengers. "There are even windwings," Matthews added to his story. All door handles were shaved, and the fenders were hand-formed and flared. Toohey also hand-formed the rear diamond-shaped bumpers and the parachute cage. 1915 Ford Model T lanterns were installed alongside the cowl and at the rear. Jim Carmichael gave it a custom Murano Pearl lacquer paint job.

Power came from a 1970 Chevrolet 327 engine that had Hilborn injectors fully blueprinted. The engine had a stock bore and stroke, but it ran a Sig Erson cam, rocker assembly, and lifters, TRW 990 racing pistons and rings, Mallory ignition and Hooker headers. The stock crank was fully balanced by Larry Payne. The heads were polished and ported. The compression ratio in 1971 was 11 1/2 to 1. When John discovered that the injectors had to be hand primed for starting, he designed and built an electronic timer that let him fire it up with the flick of a lever on the instrument panel. A Schiefer flywheel transferred the power to a Chevrolet three-speed transmission with a Fenton shifter kit. Power to the 3.70 to 1 differential was through an open Chevrolet driveshaft.

Inside, it featured a Black Naugahyde interior by Moorman's of Springfield. Toohey hand-crafted a solid walnut instrument panel that he fitted with Stewart-Warner instruments and dressed up with unusual engraving. A custom steering wheel was installed along with a custom, large foot, throttle pedal. Wall-to-wall carpeting was used on the floor.

It ran Ansen wheels with Inoue tires up front. The rear tires were Indy-style tires by Goodyear.

In 1970 John passed away, and Fred's stepmother sold the car to a Californian that rented cars to movie studios.

Please get in touch with us at mail@kustomrama.com if you have additional information or photos to share about John Toohey's 1915 Ford.