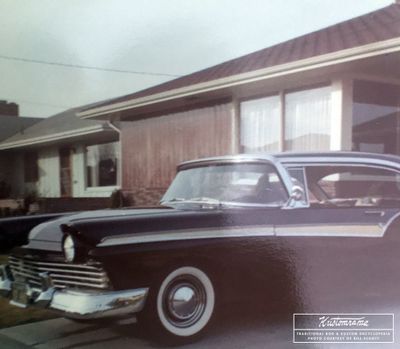 A photo of Bill's Ford as it appeared after Von Hunter had given it a mild makeover at his shop. Photo courtesy of Bill Schott.

1957 Ford Fairlane 500 two-door hardtop owned by Bill Schott of Portland, Oregon. Bill was a member of The Kings of Portland car club, and he bought the car after losing his 1956 Chevrolet Corvette to a fire early in 1961. Bill had Von Hunter work on the car. "Von had his own shop by this time," Bill told Sondre Kvipt of Kustomrama in 2019. At Von's shop, the hood and trunk lid were shaved before Von installed a tube grille. Bill believes the car was powered by a 312 engine with a four-barrel carb and a three-speed transmission. "The rear end gears were 456 making this a super-fast car off the line."[1]

Please get in touch with us at mail@kustomrama.com if you have additional information or photos to share about Bill Schott's 1957 Ford.