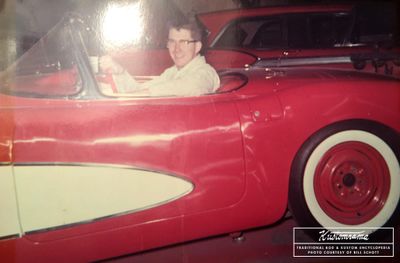 A photo of King Huggins in Bill's Corvette. "King applied about 50 coats of lacquer, hand sanding after every four coats of paint," Bill told Sondre Kvipt of Kustomrama in 2019. "Notice the great door gaps on my Vet. Von can be credited with the great spacing." When Bill last talked to King he was living in Grays Harbor, Washington. Photo courtesy of Bill Schott.

1956 Chevrolet Corvette owned by The Kings of Portland car club member Bill Schott of Portland, Oregon. Bill bought the Vet in the spring of 1960. It ran a modified 265 cu in Chevrolet engine with a four-speed and 4.11 gears. "The intake manifold had three carbs," Bill told Sondre Kvipt of Kustomrama in 2019.

Bill had Von Hunter complete some custom work on the car in 1960. "Von shaved the emblems of the hood and trunk." He also shaved the door handles and placed solenoid buttons under the locking gas cap. "Von also lowered the car, built custom lake plugs and built traction masters for the rear axle." After Von had restyled the car, Bill had King Huggins apply about 50 coats of lacquer, "hand sanding after every four coats of paint." King worked ar his father's body shop in the northeast Portland, and Bill recalled that his Vet was the first car that King ever painted, "under the eye of his father."

The car was shown at the 1959 Portland show, and it had a good reputation. Unfortunately, Bill eventually lost the car to a fire early in 1961.

Please get in touch with us at mail@kustomrama.com if you have additional information or photos to share about Bill Schott's 1956 Chevrolet.