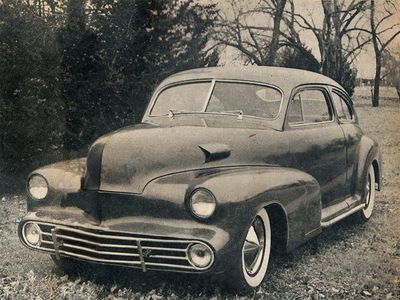 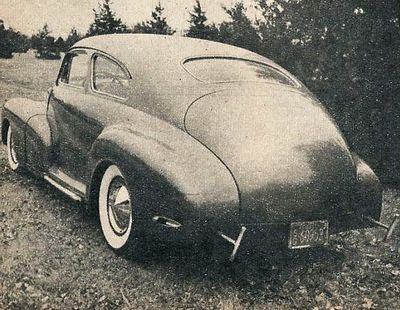 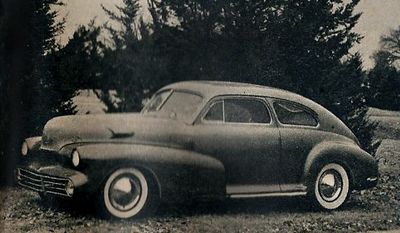 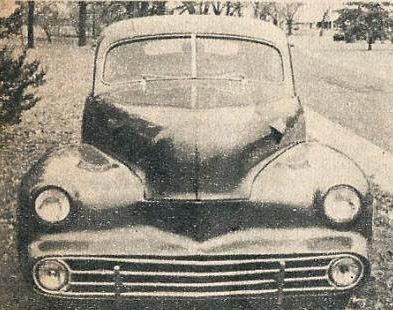 1948 Chevrolet Fleetline owned and restyled by Bill Rahn and Ray Riley of Kansas. Rod & Custom April 1957 featured a satire customizing the 1941-1948 Chevrolet. Chevrolet fans Bill and Ray felt an injustice had been done and had to prove that the cars can be satisfactority restyled. As soon as they got hold of a 1948 Chevrolet, they immediately began repairing dents and rust spots, then all the chrome were stripped off, filling the holes as they went along. The rear bumper was removed and a rear pan was constructed and formed beneath the deck. The headlights were molded and a new scoop-like grille was made and fit with a straight bar grille fit with Nerf bars and lights to match the headlights above. Functional scoops were formed in the hodd sides to break up the fat expanse of metal. The rocked molding was removed and a set of lakes pipes were routed through the fenders, continuing ahead of the rear and terminating just ahead of the rear fenders.[1]

Please get in touch with us at mail@kustomrama.com if you have additional information or photos to share about Bill Rahn and Ray Riley's 1948 Chevrolet.