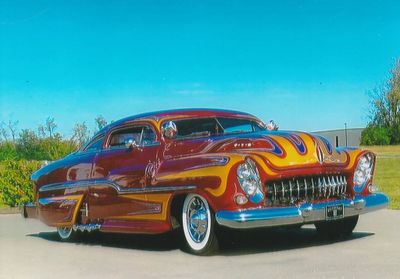 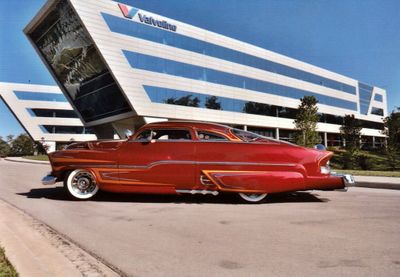 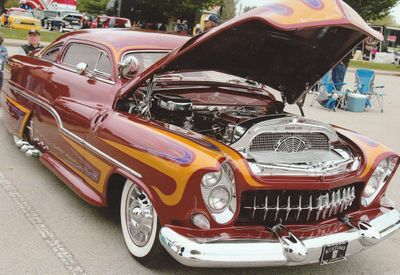 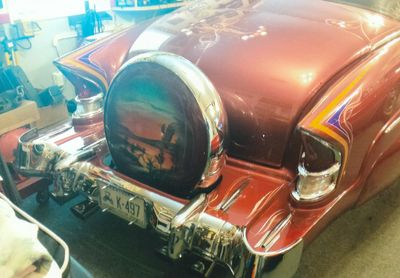 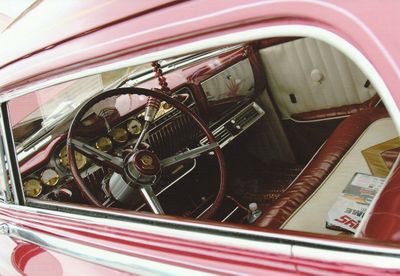 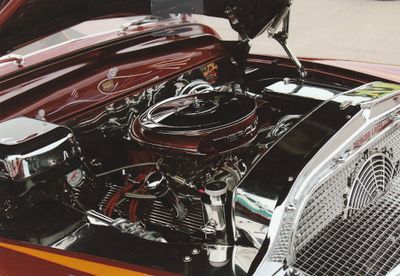 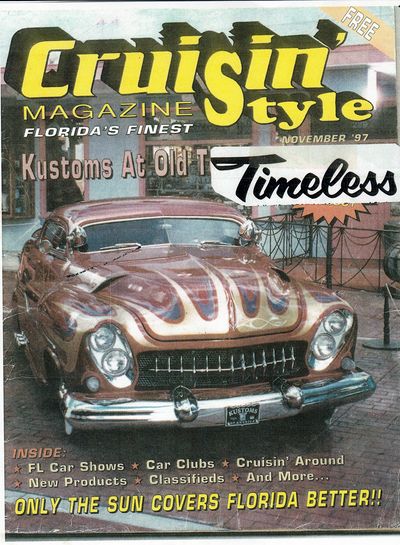 1951 Mercury owned by Bill Holzhause of Paris, Kentucky. Known as "The Dragon Lady," the car was built by Bob Nitti of Jersey City, New Jersey in the early 1980s. Modifications included a 5.5-inch chop in the front and 7.5-inch chop in the rear. The car was lowered 5 inches, and it received extended rear quarters with a 1956 Chevrolet Nomad shaved bumper and Packard taillights. The front of the car featured a shaved front bumper with 1953 Mercury bullets and a 1953 Chevrolet Corvette grill. 1957 Lincoln headlights were frenched and placed on angles along with 1959 Cadillac front turn signals. it was dressed up with handmade Bubbleskirts, Dummy lakepipes, and 1951 Oldsmobile sidetrim.[1]

In January of 2023, the Merc was advertised for sale. The car is located approximately 10 miles east of Lexington, Kentucky, in Paris, Kentucky. Mechanically the car appears to have had the front end changed to a later model GM unit, powered by a highly chromed & detailed corvette motor and matching turbo 400 transmission. It features Period Air Conditioner which blows cold air, power steering, and power brakes, with disc brakes up front and drums in the rear. The exterior is Titan Maroon with gold and plum scallops accented by old-style pinstriping. The interior is stitched in maroon, white pleats and rolls with lime gold trim, power windows, and Vintique style gauges. This car is reported to have won 100 "Best Of Awards" between 1990 and 2010 and captured a Top Award at the James Dean Run, Rebel Run in the 1990s, according to magazine articles we referenced from 1997. The car is still winning awards. It appears the car is known as “Dragon Lady” and has had two or three owners since it was built in 1983 and accumulated 14,500 miles since completion. The owners regularly drove this car to shows in the Carolinas, Florida, and Pennsylvania. The car presently drives out with all operating gauges and lights. The paint and bodywork is absolutely fantastic for a car that was built over 30 years ago. It is hard to believe the car was built 30 + years ago. Examination of the underside of the car shows the car to have been a nice rust-free car to start with, featuring solid floors and rockers, etc. The car has always been garaged. I have all of the history, pictures of the car, numerous trophies and awards the car has won, plus memorabilia. This is a one-of-a-kind fun car to own. A lot of people refer to it as rolling art. Item is offered "As Is," where is with no warranty or guarantee expressed or implied and with all faults known and unknown. The vehicle will convey with a clear Kentucky title. Descriptions are deemed accurate but are not guaranteed, and all parties are urged to inspect the vehicle in person or by a representative. $125,000.00. Price is negotiable. Direct questions or comments to owner Bill Holzhause at #859-987-8474

Please get in touch with us at mail@kustomrama.com if you have additional information or photos to share about Bill Holzhause's 1951 Mercury - The Dragon Lady.