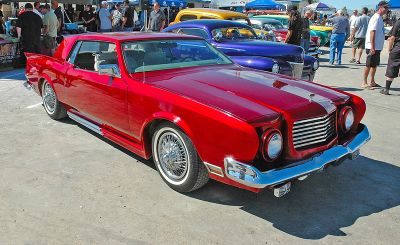 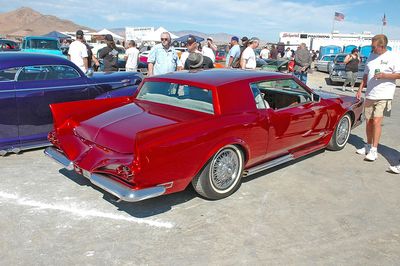 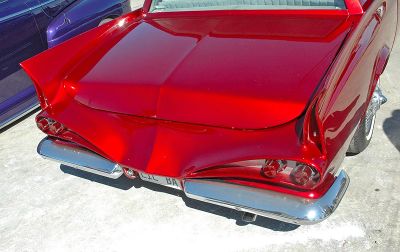 The girl next door

Linda Bagley and her boyfriend had a shop next door to Bill's shop on Park St. in Bellflower when Bill was building the car. She had a 1970 Chevrolet Camaro with a factory big block in it and was learning to do bodywork at the time. "Bill watched me like a hawk will I did minor engine repairs then slowly began doing bodywork," Linda told Sondre Kvipt of Kustomrama in 2019. " I remember being outside my shop trying to figure things out. I had a book in one hand and sandpaper in the other. Bill approached me and asked me what I was trying to do??? I remember telling him I want my hot rod to be as pretty as some of the things I saw come out of his shop. That was the beginning of our friendship, that day."[2]

The next day Linda was out working on her car as Bill pulled in for work. "He said hello to me and came to check on my progress," Linda recalls. "I had no clue if what I was doing was right or what. I remember him walking down the side of my car and his hand ran down the side of the car and he said I was doing a great job so far. I thanked him for his input and he went to his shop to work. Sometime later he came out of his shop and came over to me and he gave me a wooden box with tools in it, body working tools to help me in my endeavor. He said for me to feel free to ask for help if I needed it and he had to go to work cause the 1980 Buick had just arrived."[2]

And so it begins

When Linda saw the Buick she thought, "what can he do to it", thinking that it already was a really nice car. "Then IT began, the beginning of the Lil Bat. Next thing I saw him gut this pretty car and start cutting up the body. I was wanting to be nosey so bad I could barely stand myself. Then I just had to go see what this interesting man that gave me tools was up to. I went into my shop and grabbed a milk crate to sit on while I rested out in front of his shop. I was amazed at what I was seeing. Bill finally spoke to me and asked me how I was coming along on my Camaro and I had hit the wall, no book was gonna tell me what I needed to know to continue on. I told him I was sorta stuck but I was taking a break. That is when I got the education of a lifetime from this sweetheart of a guy with the huge cigar. I asked him what he was doing and he said he was doing some custom work to this car. I got off the milk crate and he showed me what he was gonna do." Linda got lost with him that day out in front of his shop. "He told me he was putting fins on it that’s why he cut the slats out in the back and he was gonna put teardrop tail lights on it and built in side pipes. As he told me all of this I was trying to figure it in my head on what it would look like and I finally told him I was having trouble seeing what he was doing and I asked if he had his drafting plan to look at so I could get the just of it? He looked at me and said, “I don’t write things down, there all up here,” and he pointed to his head. Now that got me going, I just had to know more."[2]

Every chance Linda had over the next 90 days, she was on that milk crate watching him work his magic. "I watched him sling about 7 or 800 pounds of lead on that car. I watched him like a hawk bring that car to life then paint it and rolled it out in the driveway to dry. I knew it was going to a show and soon cause our talking time got cut back and he excused himself and finished it off. Then one morning he came to work all dolled up and I knew this was the day. This man painted this Lil Bat Candy apple red with a gold base metallic and the paint was so beautiful, I never knew that you could paint something that looked so deep, like you could swim in it. Flawless and he never put clear on the paint. When I asked him why no clear, he simply said I don’t put that stuff on my cars cause I paint with paint then I color sand and buff them out. I decided at that moment that was the color my hot rod Camaro should be."[2]

One day, a while after the Lil Bat was released to the public, Bill told Linda that he would paint her car when she got done with all of the bodywork, "it was on my birthday. Well as bad luck would have it, my boyfriend and I split up and I was no longer part of the shop next door to Bill and I moved away." Linda would stop in to say hi when she was in town, and Bill would take a break so they could have a soda together. "By this time my car was all in primer with no dings or dents and no bondo and he told me to make time so he could paint it for me. My car was parked on the street at my friend's house and it got hit in the rear end, so it was back to the drawing board for me." Linda moved away to Florida shortly after that but remained true to his friend with the big cigar. "Every year when I flew back to California I would head for Park street to see my dear friend."[2]

Please get in touch with us at mail@kustomrama.com if you have additional information or photos to share about Bill Hines' 1980 Buick.