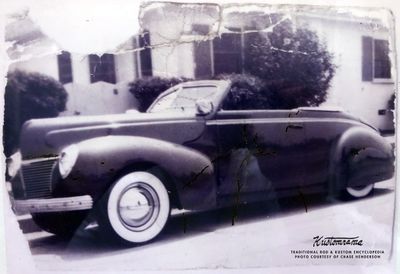 A photo of the Merc that Bill carried in his wallet for his entire life. Bill's grandson Chase believes the photo was taken around 1947. Photo courtesy of Chase Henderson. 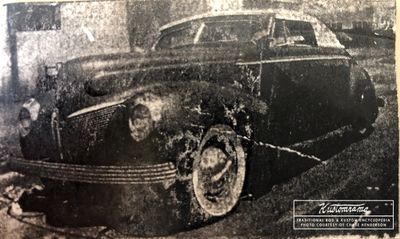 According to Chase's dad, Bill worked for Barris Kustoms in the mid-late 1940s. "Barris taught him how to customize cars," Chase told Kustomrama. Chase came across this photo of Sam Barris' 1940 Mercury custom on the wall in Bill's office. Chances are Sam's Merc served as inspiration for Bill's build. Photo courtesy of Chase Henderson. 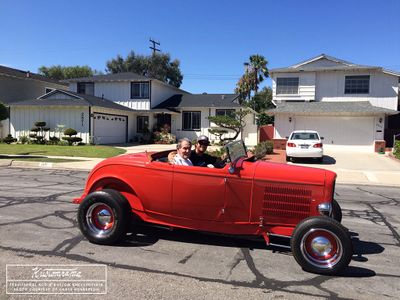 A photo of Bill and Chase in Bill's 1932 Ford roadster. Bill was pretty active in the hot rod community in Southern California up until about 2010 when his wife got sick. When he passed away, he had a 1923 Ford Model T Bucket, a 1932 Ford roadster, and an old MG. Photo courtesy of Chase Henderson.

According to his grandson, Chase Henderson, Bill bought the Merc when he was 14 years old. He did a lot of work on it, and "my grandmother and he went on their first date in it when they were 16," Chase told Sondre Kvipt of Kustomrama in 2020. According to Chase's dad, Bill worked for Barris Kustoms in the mid-late 1940s. "Barris taught him how to customize cars." Modifications on the Merc included a shaved hood with shortened side trim. The runningboards were removed, the top was chopped, and it was dressed up with DeSoto ripple bumpers, spotlights, flipper hubcaps, fenderskirts, and a padded top. "He was friends with Bill Gaylord and he used to talk about Gaylord doing the Carson top," chase recalled, adding that he believes the car was originally painted a dark blue.[1]

After working for Barris, Bill had a few different jobs before opening up a Signal Gas Station where he repaired cars.[1]

Bill eventually sold the Merc. He lost track of it and was not able to track it down again. In 2020 the family didn't know who he sold it to or where it ended up. Chase has been trying to trace his grandfather's old custom for some years, and in the 2000s Bill had heard that it was in Northern California, and that it was in a really rough shape. "We never found out who the owner was or where it was though," Chase told Kustomrama. Bill was pretty active in the hot rod community in Southern California up until about 2010 when his wife got sick. "He was friends with Gaylord, Vic Edelbrock, and a bunch of other local hot rod legends throughout his life." When he passed away, he had a 1923 Ford Model T Bucket, a 1932 Ford roadster, and an old MG. Please get in touch with Kustomrama at mail@kustomrama.com if you have any info to share about Bill's lost Merc.[1]

Please get in touch with us at mail@kustomrama.com if you have additional information or photos to share about Bill Henderson's 1939 Mercury.