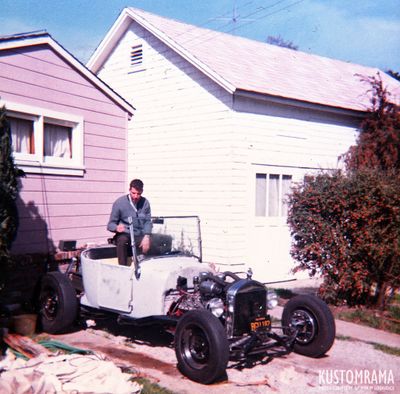 A photo of Winky with the bucket in 1965. Photo courtesy of Philip LoGiudice. 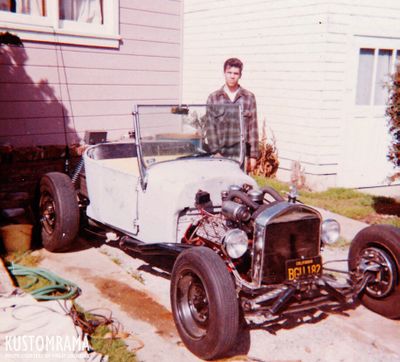 A photo of Philip with Winky's bucket in 1965. Photo courtesy of Philip LoGiudice.

1925 Ford Model T roadster owned by Bill "Winky" Cissell of San Carlos, California. Winky's bucket was built in the early 1960s, and it was mostly complete when he got it. Winky took it apart and had some parts chromed. He also repainted the frame. In 2016 Philip LoGiudice told Kustomrama that his buddy's bucket was powered by a 1948 Mercury; "It had a 1939 Ford gear box and custom headers. The headers were custom made at a local muffler shop. It used an Olympia beer keg for the gas tank. Flathead engines were very popular and affordable in the early 1960s. He beat a brand new Mustang in it." Unfortunately Bill died in Kodiak, Alaska in 1980, at the age of 34 years.[1]

Please get in touch with us at mail@kustomrama.com if you have additional information or photos to share about Bill Cissell's 1925 Ford.