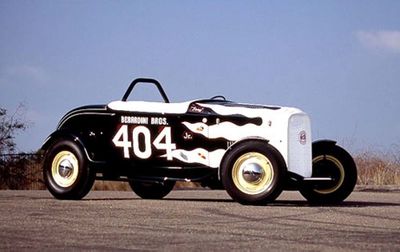 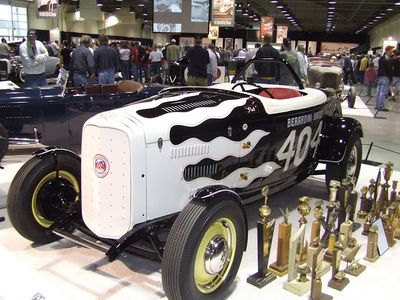 The restored version of the 404 Jr. was unveiled at the 2005 Grand National Roadster Show. 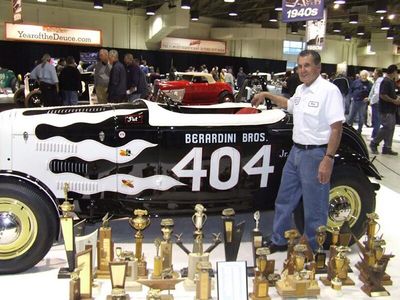 Pat Bernardini with the roadster at the 2005 Grand National Roadster Show. 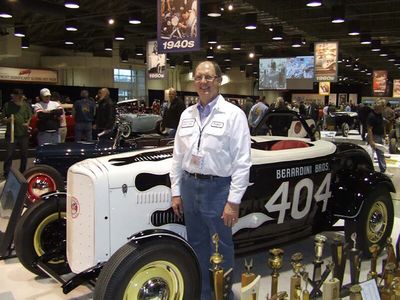 Roger Morrison with the car at the 2005 Grand National Roadster Show. 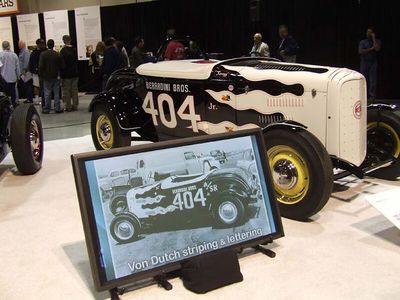 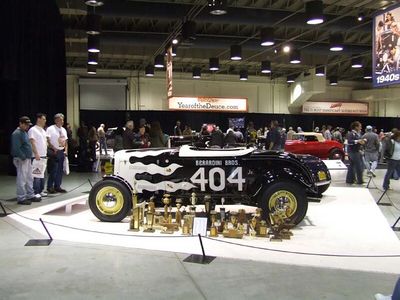 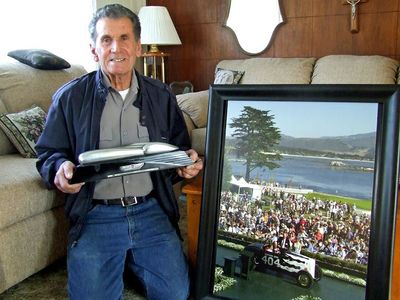 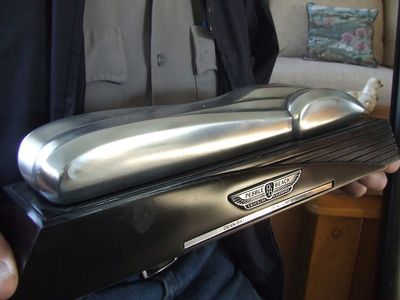 1932 Ford roadster owned and raced by Pat and Tony Berardini. The car, known as 404 Jr., was pinstriped and lettered by Von Dutch. Pat raced the 404 Jr. from 1950 to 1955. Pat and his older brother Tony had lost several friends due to accidents while racing, then when Pat lent the 404Jr’s engine to a friend to put in his car and ended up crashing the other car and was decapitated, Pat decided he pushed his luck far enough and decided to sell the car after he put the engine back in the 404 Jr.

Jeano LaCoste bought the roadster from Pat on July 23, 1955. The next day Jeano broke the speed record in Saugus and kept traveling North setting new records all along the way. LaCoste continued to break California dragstrip records through 1962, and he continued to race until 1968 when it started to get too expensive to race. Advertising and sponsorships forced the little guys out.

Jeano LaCoste was the last guy to race the car. LaCoste sold it to a long time friend, Rudy Perez. Rudy knew the car and its history and wanted to make it a street roadster. Rudy removed the 404 numbers off the doors, but kept the license plate the same (404 JR). He owned it for the next 37 years, driving it five times across the United States, Canada and Mexico, where it won several awards at classic car and roadster shows.

Perez had no intention of selling it. In January of 2003, Perez displayed the car at the Grand National Roadster Show in San Mateo, California, where it was awarded the Brizio Family Award as Best Street Driven Hot Rod. Mr. Roger Morrison was attending the show, looking for a car to restore. Dave Crouse was with Roger and when they saw the 404 Jr., Dave said “to restore a great historic car, this is the Holy Grail.” Roger was only able to purchase the car because he told Rudy that he wanted to restore the car to its original form. Those were the magic words and a deal was made. Pat was contacted and used as a consultant about the specifics of the car, all 3 former owners were present for the unveiling at Pomona’s Grand National Roadster Show in January 2005. After that, it traveled to several locations for display before it went to the famed Pebble Beach Concours d’Elegance. There the ‘32, being the Holy Grail of hot rods, was celebrating 75 years, with a special class of nine distinguished examples. Five cars in the class had been named to the exclusive “Best Ever 75 Deuces” list and one that had been out of sight for half a century made its debut at Pebble. Four of the “32s on hand were new restorations, previously unseen for many years. The 404 Jr. won the Dean Batchelor Award for the Most Significant Hot Rod. Pat was able to ride over the stage with its current owner Roger Morrison. The 404 Jr.’s history has come full circle. Unfortunately, Pat passed away Wednesday, May 29, 2013 at the age of 85. He died peacefully with his children at his bedside.

Please get in touch with us at mail@kustomrama.com if you have additional information or photos to share about Bernardini Bros. 404 Jr. 1932 Ford Roadster.