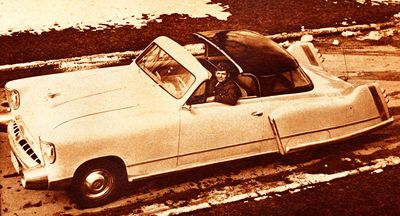 Arthur's Comet as it appeared when it was featured in Motor Trend November 1953. 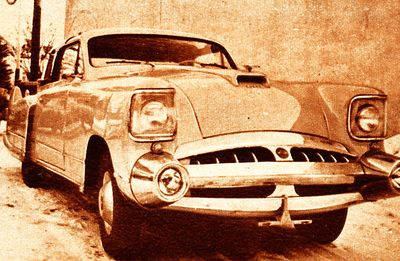 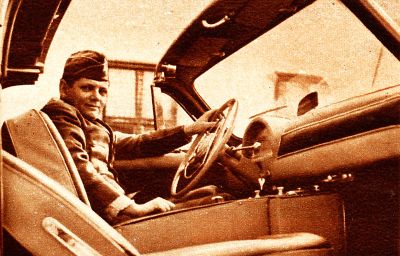 1941 Packard 6 restyled by Spohn Coachworks for lieutenant Arthur Cooper.[1] Known as the Cooper Comet, It took seven months for Spohn to finish Arthur's Packard. The car featured a sliding safety-glass roof over the front compartment. The rest of the roof was removable; it was attached by 6 bolts. In front the car featured a grill-bumper combination made of aluminum. Ordinary headlights were sunk into the fenders, giving the car a distinctive look. Foglights were integrated into the bumper-bombs. As with many other Spohn creations, the rear fenders received a treatment similar to the 1951 GM LeSabre Concept Car with its fins, taillights and chromed trim. Once the bodywork was done the car was painted light grey.[2]

The seats inside Cooper's car formed a bed. A central pedestal held a five-band short-wave set and an icebox. Rear fender vents functioned as the rear window defroster.[2] Arthur's Comet was featured in Motor Trend November 1953. In 1974 an image from the same photo session was published in Special Interest Autos, Jan-Feb 1974. According to that story, total build cost was $7000.[1]

Please get in touch with us at mail@kustomrama.com if you have additional information or photos to share about Arthur Cooper's 1941 Packard.