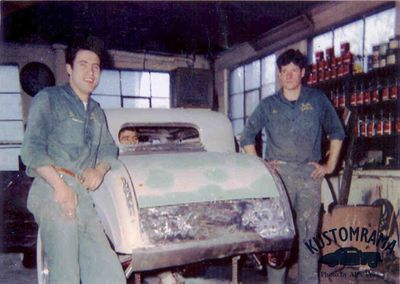 A construction photo of Alex's coupe. Alex is the one looking out the back window of the car. Photo courtesy of Alex Velis, provided by Stephen Peters. 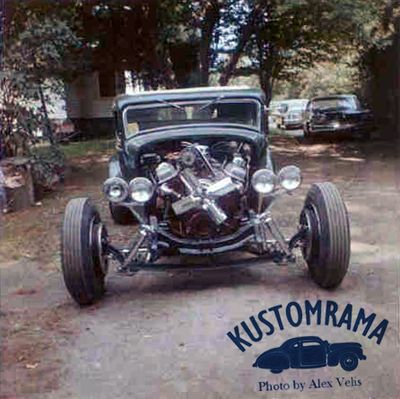 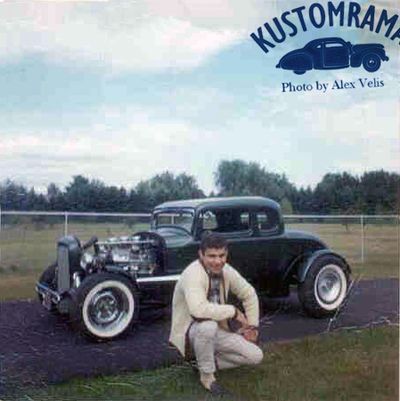 A young Alex with the coupe. Photo courtesy of Alex Velis, provided by Stephen Peters. 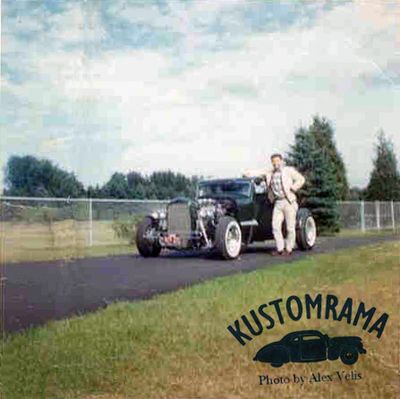 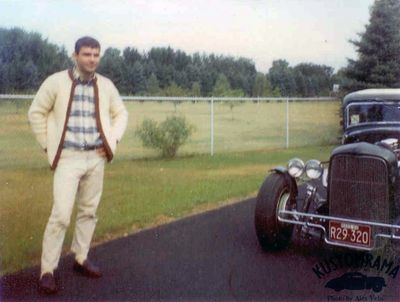 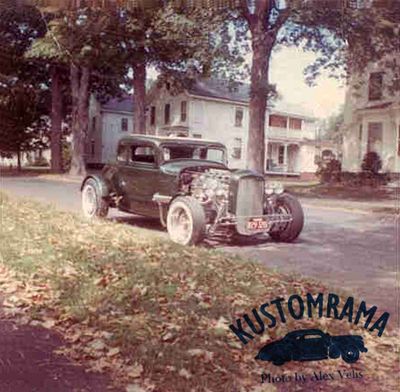 1932 Ford 5-Window Coupe owned and built by Alex Velis of Westfield, Massachusetts. Alex started his love for hot rods watching Nelson Duscheneau build the Voodoo Roadster in a garage down the street. At age 13, Alex got a ride from an older friend to buy his first set of gas welding torches. Of all the cars Alex has built since then, the '32 was his favorite. It was chopped 4 inches and channeled over a 1934 Ford frame that he Z'ed in the back. Power came from a 1959 Pontiac 389 with a tri-power setup. The engine pushed a 1960 Corvette 3 speed that was backed by an early 1950s Oldsmobile rear end. Up front, it featured a chromed front end with a dropped axle and 1940 Ford brakes. Alex ran cycle fenders and chromed wheels on all four corners. It featured quad headlights up front, homemade nerf bars, and Volkswagen teardrop taillights in the back. The firewall was a flat piece of 1/4 inch steel plate that he chromed. Two swing pedal master cylinders off an early 1950s Ford was mounted to the firewall. The cowl went was welded shut and filled with lead, and the rain gutters were removed. The hood was stretched 3 inches and the grille was kept unchopped. The coupe was painted green with a highland plaid and black interior. The dash was made of birch wood and it was filled with Stewart Warner gauges. Once completed, Massachusetts had him stamp a new number onto the frame rails when it was registered.[1]

Alex sold the coupe to Phil Marcyoniak when he started teaching in 1965. A half year later Phil sold the coupe to Richard Gianchetti. Richard was a friend of Alex's brother, and he grew up with Alex's family. He paid 1200 dollars for the car, and it took every penny he had saves thru the years and a little more. Richard's parents weren't happy as he had bought a car he could only drive a few months a year. After high school, Richard went in to the service, and the coupe went into storage. It stayed in storage until he was discharged in 1969. In 1969 Phil Marcyoniak helped Richard tow the car behind his 1955 Chevrolet to Las Vegas, Nevada. Richard had just gotten married and had a daughter, so he sold the coupe so he could make a down payment on a house. Richard sold the coupe in Las Vegas, Nevada in 1969, and the guy who bought it said he owned an A&W Root Beet. Rich believes the Mass VIN on the car was "MASS E317." Richard lived in Las Vegas for 43 years. He looked for the coupe at several car shows, but he never saw it again. [2]

Alex has been building hot rods since he bought his first set of gas welding torches. The '32 was his all time favorite build, and he is currently trying to locate it. If you know what happened to Alex's coupe, please mail us at mail@kustomrama.com.

Please get in touch with us at mail@kustomrama.com if you have additional information or photos to share about Alex Velis' 1932 Ford.