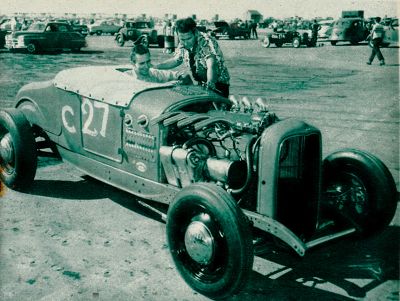 Norm Taylor seated, and Jot Horn to the right at the Santa Ana Dragstrip. 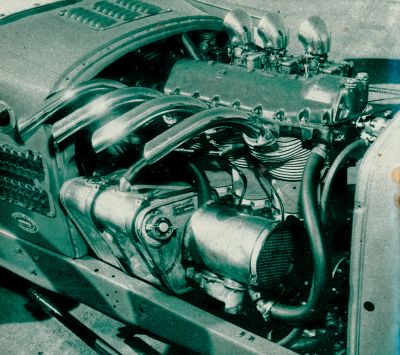 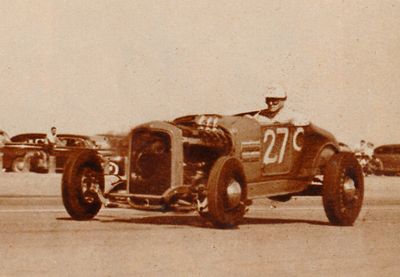 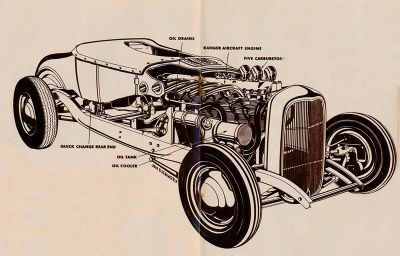 1927 Ford Model-T Roadster built by Norm Taylor and Jot Horn of California in 1951. The two buddies worked at Bell Auto Parts, and decided to build the ultimate race roadster together. They got hold of a 1927 Ford Model-T roadster body that they fit on a set of 1932 Ford rails, a 1932 Ford grille shell was also used. A dropped and filled front axle and split wishbones were installed on the chassie. The engine was a six cylinder 250hp Ranger Aircraft engine, its length forced it to be located partly under the cowl, however, it was installed upside down and backwards! The single overhead cam acted with roller rocker arms on inclined valves. The rods were steel I beams, and twin magnetos took care of the electrical system. The bore was 4 1/8 inches with a 5 1/2 stroke, for a total of 441 cubic inches, and a weight of 370 lbs. The dry sump oil system was cooled by an oil radiator. A crank connector was made for the prop shaft and fit to a Ford flywheel. The engine plate was made to fit a 1949-1950 Ford bell-housing, and a 1939 Ford transmission with Zephyr gears was adapted to that. The rear end was a 1932 Ford unit with shortened drive shafts and radius rods, and a Halibrand quick-change center section. Norm and Jot built a five carburetor intake manifold sporting Stromberg 48 carbs. The steering was also from a 1932 Ford, and juice brakes from a 1946 Ford was installed. The tachometer hands fell of the first time out, so they installed a Stewart-Warner tach. The engine tached 4000rpm, but it developed most of its power between 2000 and 3500rpm. When the car was done, it was painted bright red. The build took the duo eight months to complete! Their boss, Roy Richter helped a little on the way as well. In January 1952, the car turned 105,26 mph at the 1/4 mile Santa Ana Dragstrip.[1]

Please get in touch with us at mail@kustomrama.com if you have additional information or photos to share about Norm Taylor & Jot Horn's 1927 Ford.