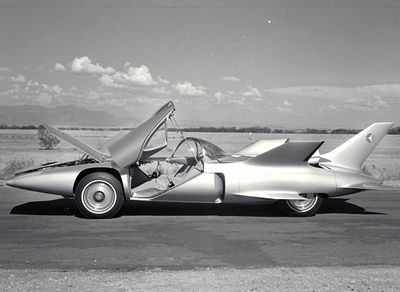 Harley Earl with the Firebird III next to the 1938 Buick Y-Job, the 1954 GM Firebird I and the 1951 GM LeSabre inside the viewing courtyard of the Technical Center's famous Design Center.

1958 GM Concept Car. While some of Harley Earl’s other concept cars had styling influenced by aircraft design, the Firebird III might have been the first that looked as if it could actually fly. The fiberglass-bodied vehicle had a wide, tapered nose; twin bubble canopies for the driver and passenger; and seven jet fighter-esque fins. The car’s technology was as cutting-edge as its appearance. Special drag brakes popped out of flat panels to slow the Firebird at high speeds. In the cockpit, a joystick-like "unicontrol" device took the place of the steering wheel, brake and accelerator pedal. Instead of a rear-view mirror, the car had a rear-mounted camera that transmitted images of the road to dashboard TV screens. Just in case all that stuff was too difficult for a driver to master, the Firebird III also was equipped with an automated guidance system, designed to follow directional radio signals given off by future high-tech highways that, unfortunately, have yet to be built.

Please get in touch with us at mail@kustomrama.com if you have additional information or photos to share about 1958 GM Firebird III.