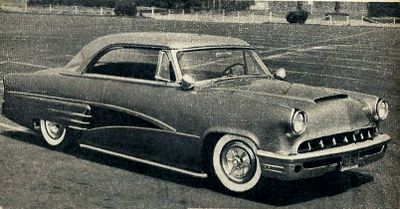 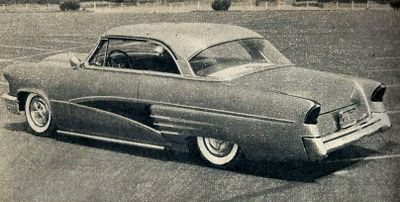 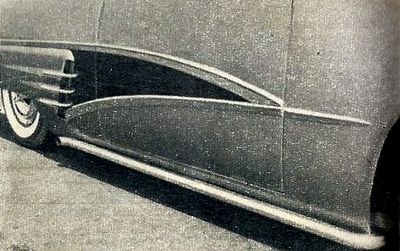 1953 Mercury restyled by Jay Johnston of Jay's Custom Shop in Compton for Walter Gilder of Lynwood, California. Walter's clean Merc was nosed and decked. The door handles were shaved to give it a cleaner appearance. Up front, the headlights were molded and the hood scoop was made functional and the trim surrounding it was molded solid. The grille featured a stock accessory bar from Eastern Auto. The airscoops on the quarter panels were made functional as well, and featured three ornamental chromed teeth. The rear fenders were slightly extended and a set of 1956 Lincoln taillights were installed. The rear bumper was simplified by removing the usual bumper guards. Yet a hard to see modification Jay did, was to roll around the rear bumper that he molded into the fender panel. The clever side trim solution was made from 1956 Chevrolet components. The car was painted a bluish mist with astro-blue center and silver blue three-tone with overlip shades on both the headlights and taillights. The functional side stacks helped the car getting physical lower to the ground, and the dual spotlights gave the top a lower silhouette. Custom hubcaps hubcaps were accomplished by adding extra blades and spinners.[1]

Please get in touch with us at mail@kustomrama.com if you have additional information or photos to share about Walter Gilder's 1953 Mercury.