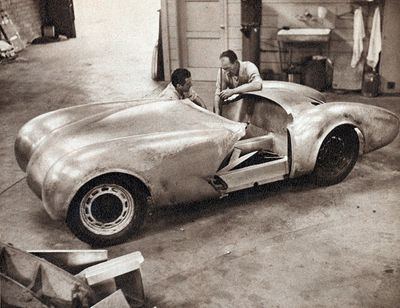 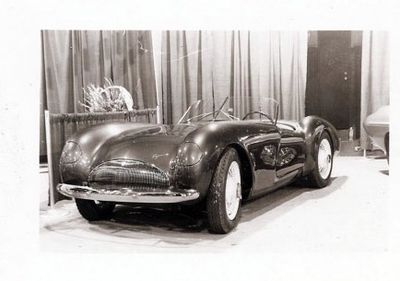 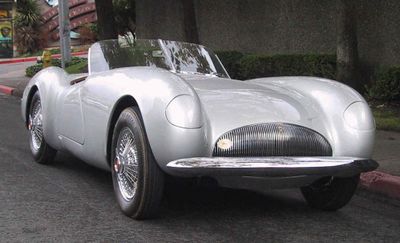 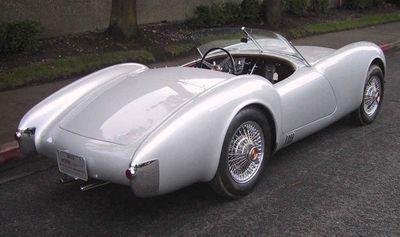 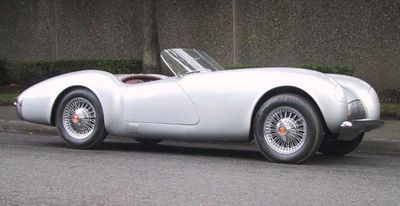 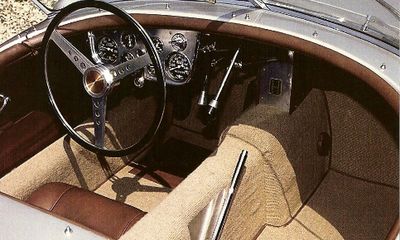 Vincent E. Gardner's Vega was a two seat-roadster Vince designed in order to win a contest co-sponsored by Motor Trend and the Ford Motor Company. The name Vega comes from a clever fusion of Vincent's name: Vincent. E. GArdner. The contest was first announced on the cover of Motor Trend September 1950. The rules of the competition declared the purpose of the competition as a means of arriving at a practical, functional body for a contemporary Ford Anglia chassis donated by the Ford Motor Company. The winning paper design was going to receive both the Anglia chassis and a $500 prize. There were also 2 hitches, Ford "reserved" rights to the winning design (two months after the contest was announced, rules were amended to grant Ford rights to ALL entries), and the winner had to build, or have built, the triumphant design, using the $500 "to defray expenses incurred in completing the body." Several hundred entries were submitted to the competition, but Vince ran off with the first price. The panel of judges consisted of Walt Woron, Lynn Rogers who was the automotive editor of the Los Angeles Times, and legendary Indy race car designer Frank Kurtis. Gardner's winning drawing and two photos of his cast-plaster scale model were presented in Motor Trend January 1951. The $500 prize money was not enough money to build the car, so Vincent managed to raise an additional $8000 from Henry Ford II.

Templates were taken from a quarter-scale clay model, refined, and transferred into a full-size wooden buck that was used to make the aluminum body panels. Some panels were hand hammered with mallets over steel-shot bags, while other pieces were made using the shop's Chicago Pneumatics planishing hammer. Master metalsmith Emil Deidt did most of the bodywork on the car. The headlamps, clearly influenced by the Cord, were hydraulically operated using aircraft actuators, the door hinges were concealed, and the grille was made piece by piece out of brass.

Gardener asked Phil Weiand to help him build the powertrain components. A 60 horsepower Ford Flathead engine was chosen for the car. Weiand's own aftermarket heads pumped up the stock 6.6:1 compression ratio and a dual-carburetor intake manifold and tubular headers aided breathing. Another standard hot-rod trick was loading close-ratio Lincoln Zephyr gears inside a standard '39 Ford transmission case. The Anglia's flimsy axles and brakes were ditched in favor of American-made parts narrowed to fit the Vega's svelte proportions.

3 years after the contest was announced, the Vega appeared on the cover of Motor Trend September 1953. Small changes had been done to the original design, and the finished car was true to the original model. Gardner considered offering fiberglass replicas of the car for sale to the kit car crowd. That never happened, partly because Ford Motor Company took an interest in the Vega and summoned it back to Dearborn to help celebrate the firm's 50th anniversary. According to Fawcett Book 156 How to Build Hot Rods, Vincent wanted to offer fiberglass kits for about $1,000. The body was supposed be composed of interchangeable sections to provide customers a variety of design possibilities simply by ordering different combinations of body parts.

Ford displayed the Vega for several years at its Rotunda exhibition hall, before the car gradually slipped into obscurity. Busy with his design career, Vincent passed the Vega to an associate who planned to update the driveline with a more powerful engine. Once disassembled the car spent its next 40 years or so moving from one garage to the next in the Detroit area. Gardner's psychologist, who collected specialty and prototype cars, rescued the Vega from the hop-up artist. The next owner, John Muir started to reassemble the body to the frame. After a while Muir realized he'd probably never get the car back together again, and offered the remains to dream car collector Joe Bortz. After several years of low-level negotiation, terms were finally agreed upon and Bortz hauled the fallen star to Chicago. When his friend Fran Roxas - the country's foremost V16 Cadillac restorer - spotted what was left of the Vega, it was love at first sight. After a painstaking and expensive three-year disassembly and reconstruction in Roxas's Alsip, Illinois shop, the Ford Vega was back, more gorgeous than ever.

Please get in touch with us at mail@kustomrama.com if you have additional information or photos to share about Vincent E. Gardner's Vega.