From Kustomrama
(Redirected from Tucker Torpedo)
Jump to: navigation, search 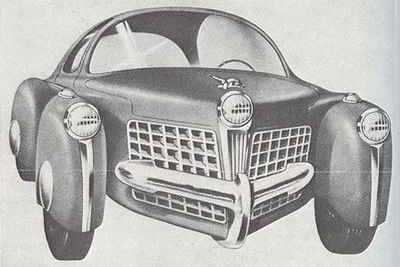 An early version of the Tucker Torpedo designed by George Lawson, Preston's Chief Designer at the time. 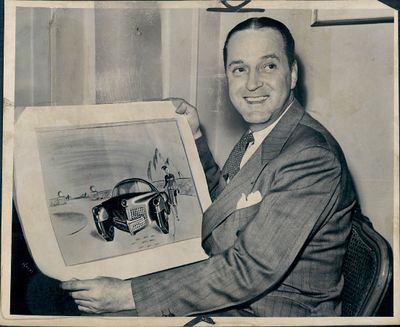 A photo of a very excited Preston Tucker holding an early concept drawing of the George Lawson designed Tucker Torpedo. George would later be replaced by Alex Tremulis as chief designer, and the name Torpedo would be dropped. This photo was dated February 12, 1946. 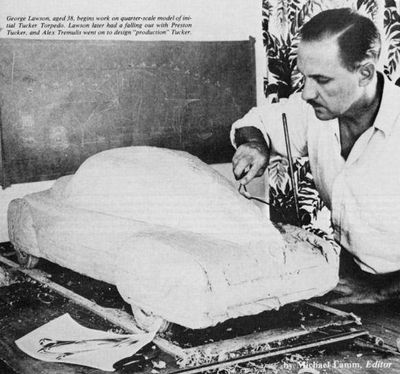 George Lawson working on a quarter-scale clay model of the Tucker Torpedo in 1946.

George's model was photographed in settings to make it look real. Airbrush was used to reflect shadows. Preston used these shots in his first stock prospects.

Another photo of the clay model. Photo courtesy of Preston Tucker LLC. 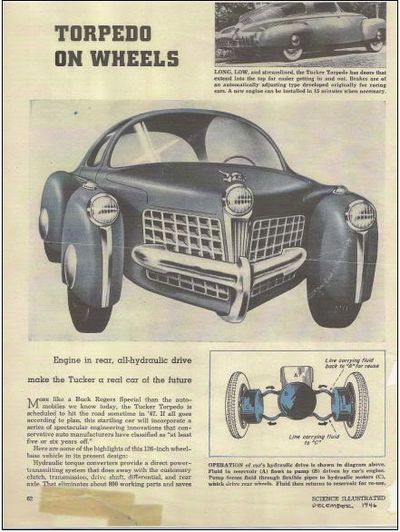 An article about the Tucker Torpedo that was published in Science Illustrated December 1946. 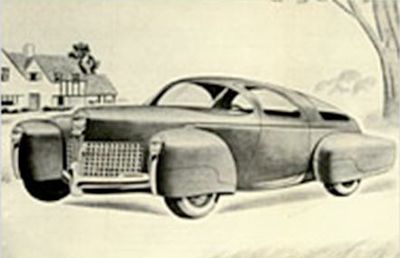 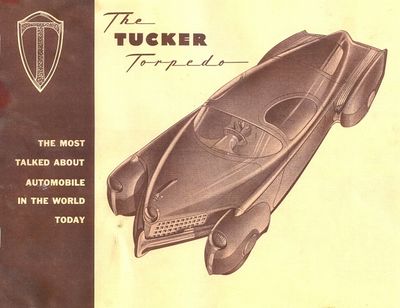 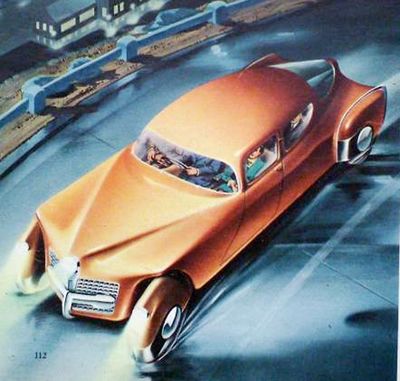 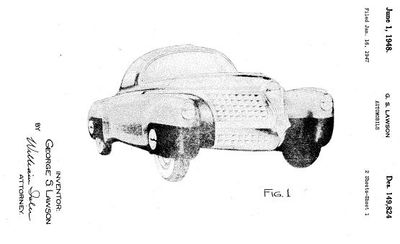 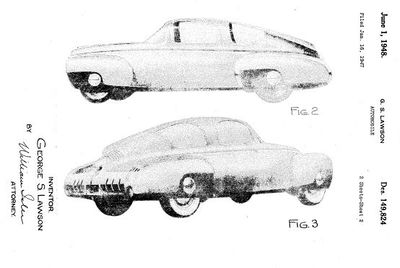 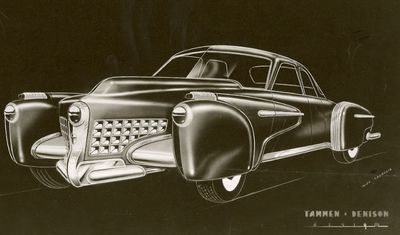 A Tucker Torpedo design proposal by Alex Tremulis. This design was based on George Lawson's design, but incorporated some improvements. Alex did these in late December of 1946 as an employee of Tammen & Denison. 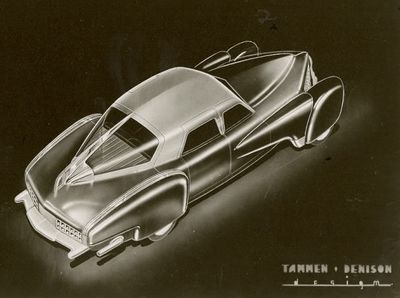 A rear 3/4 view of another Alex Tremulis design study. 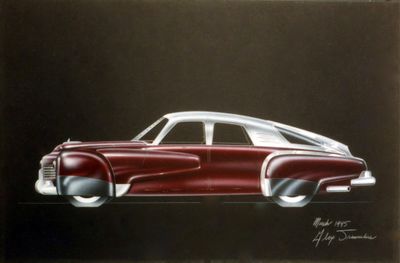 Another design proposal that Alex Tremulis made around Christmas of 1946. According to Steve Tremulis it was drawn on his mother in-law's kitchen table on Argyle Street in Chicago. Preston Tucker initially had only 15 minutes for Tremulis, but their first meeting lasted for several hours. This drawing is a reprint made for the movie, and it was wrongfully signed 1945. Photo courtesy of Preston Tucker LLC. 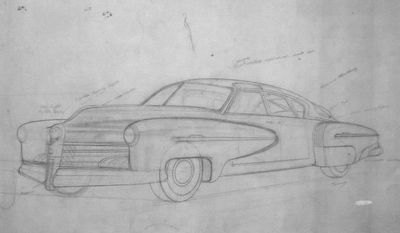 A vellum for the Tucker Torpedo made by Alex Tremulis in February of 1947. 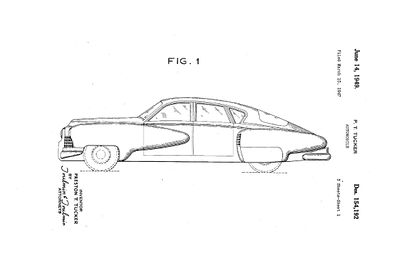 The patent for an automobile filed by Preston Thomas Tucker March 15, 1947 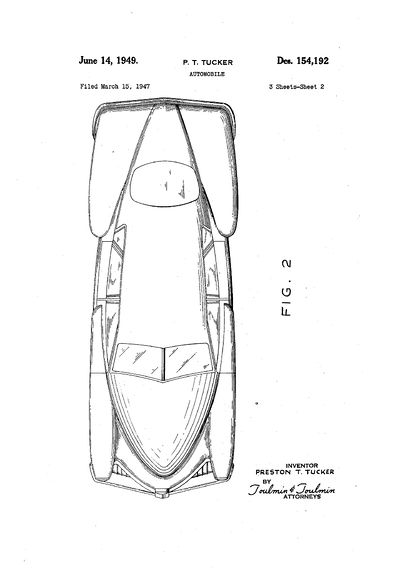 The design filed March 15, 1947 is the design for the Tucker Torpedo. 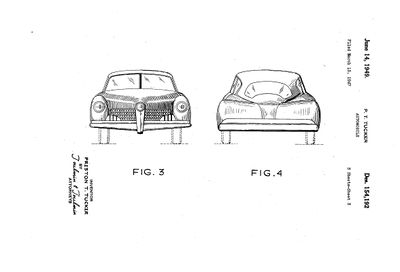 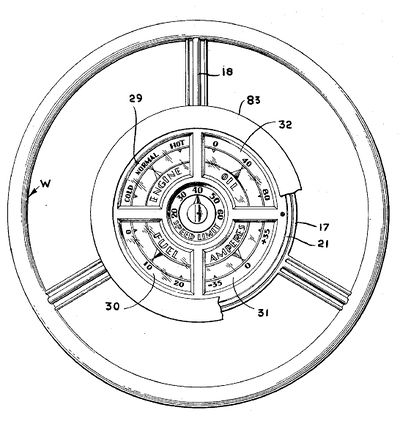 A patent for a steering wheel mounted instrument that Preston Tucker filed March 24, 1947 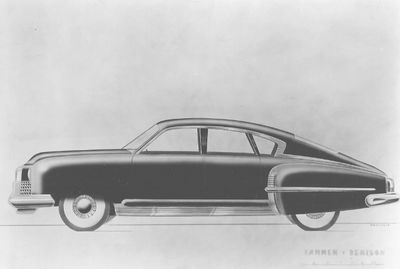 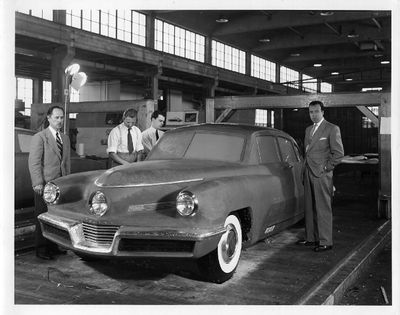 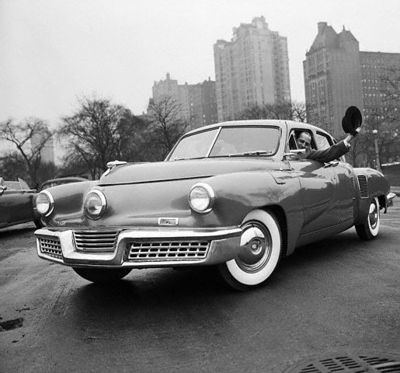 The final design for the Tucker Automobile was named Tucker 48. The final version was designed by the Lippincott team. 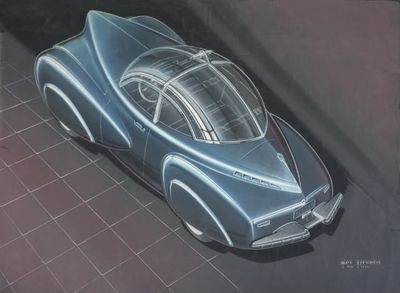 A Rear engined bubbletop car designed by Alex Tremulis in February of 1936. This concept looks like a futuristic 1930s version of the Tucker 48. 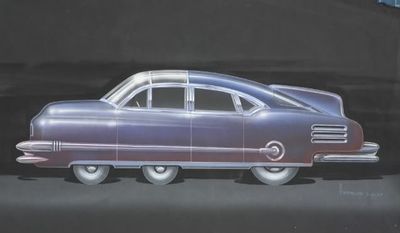 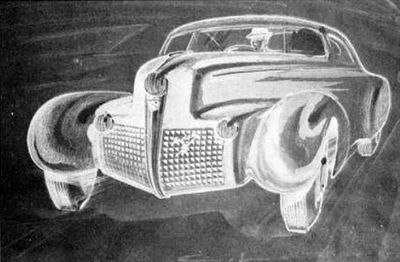 An advanced Buick with a cyclops headlight that George Lawson sketched while he was studio chief at Buick. The design has many similarities to the Tucker Torpedo he designed for Preston Tucker. 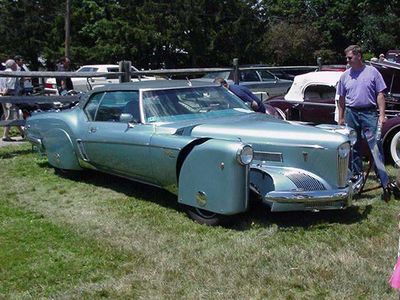 A 1972 Buick Riviera that someone customized i to a Tucker Torpedo. 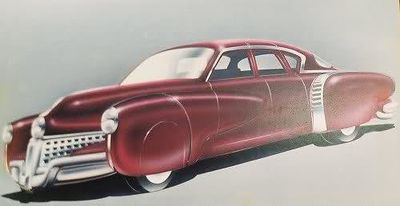 A sketch Thom Taylor made for the movie Tucker A Man and his Dream around 1985. Thom combined several of the elements from various original sketches.[1] 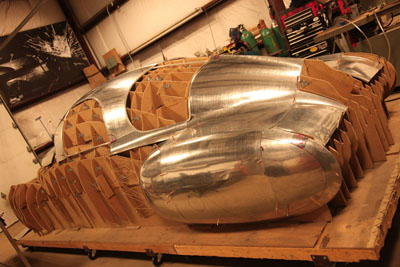 In 2009 Rob Ida of Rob Ida Concepts constructed a wooden buck he could use to hand build George Lawson's Tucker Torpedo out of aluminum. A model George made of the car was scanned, and the dimensions were converted to full scale before the shapes were CAD drawn and CNC cut. Rob Ida Concepts began fabricating the body panels for the car in September of 2013.

The Tucker Torpedo was Preston Tucker's first concept for a Tucker Automobile. It was designed by his Chief Designer George Lawson in 1946. Except for a small scale model, the Torpedo never made it into real life. After Preston refused to pay Lawson for his work, Lawson sued Tucker Corporation for $ 45 000. He settled for $10 000 out of court.[2]

Science Illustrated December 1946 published an article about the Tucker Torpedo. This article moved the entire United States of America. About 1 month later, on January 16, 1947, George Lawson filed a design patent for the car, as he had parted ways with Preston Tucker, and Alex Tremulis had taken over as Chief Designer for the Tucker Corporation. This application included photos of the small scale model used in the Popular Science article. George's patent was eventually issued as Design Patent D149,824 on June 1, 1948.[3]

Impressed and influenced by Lawson's creation, Alex Tremulis made his own improvements on the prototype late in December of 1946. These drawings featured a more practical design which initially kept thee moveable cycle fenders, rear fin, easy entry door cutouts, and egg crate grille. By February of 1947 Tremulis' designs had progressed further from the initial concept, and more towards the final product. According to research provided by Larry Clark’s “Tucker Chronology Project”, Alex Tremulis was asked to prepare a rendering to be used in advertising the new design for the Tucker automobile on February 28, 1947. By then, the design incorporated the flowing fenders of the production model. It also kept remnants of the rear fins as well as other notes as to what the rendering should look like. This design was printed in the Chicago Herald-American and other publications on March 2, 1947.[3] Alex Tremulis worked on the Tucker project as a Tammen & Denison employee for 3 months, from December 1946 - March 1947.[4]

March 4, 1947 the J. Gordon Lippincot and Associates were involved in the Tucker project. The team consisted of Hal Bergstrom, Read Viemeister, Budd Steinhilber, Tucker Madawick, and Phil Egan. The Lippincott team's design was the design chosen for production. March 15, 1947 Preston Tucker filed a patent protection for the Alex Tremulis design that was advertised March 2, 1947. The design was issued on June 14, 1949 as Design Patent D154,192. The fins are gone, the side trim is gone, and the rear fender grill now has horizontal louvers, much like the final product. Also note that the Lawson design patent D149,824 was included in the references for the Tucker patent. [3]

The Tucker Torpedo never made it into production. A small scale model was made, but that was all. Several years later, someone tried to build the Tucker Torpedo out of a 1972 Buick Riviera.

After building several fiberglass Tucker 48's, Rob Ida Concepts and Ida Automotive began working on an aluminum version of George Lawson's Tucker Torpedo around 2009. The Torpedo will be built using old coach building techniques and tools. A wooden buck was made by scanning the model that George Lawson built on his kitchen table in 1946. George's original model is on display at the Petersen Automotive Museum. It was scanned, and the dimensions were converted to full scale before the shapes were CAD drawn and CNC cut. The individual pieces were assembled into a full scale model used to shape the metal panels on. In September of 2013 the guys at Rob Ida Concepts began fabricating the body for the car.[5]

Please get in touch with us at mail@kustomrama.com if you have additional information or photos to share about The Tucker Torpedo.