From Kustomrama
(Redirected from Tridents)
Jump to: navigation, search 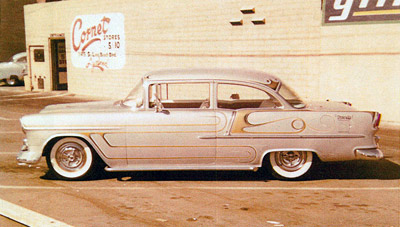 Bill Sharpe's 1955 Chevrolet of Lynwood, California. Bill was a founding member and the first President of the Tridents of Southern California car club, and his Chevrolet was restyled in the late 1950s. The car was named "Dracula." 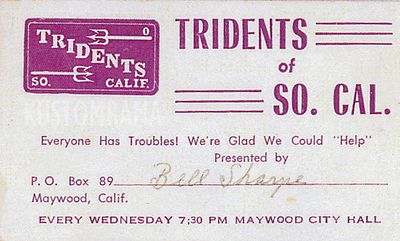 Bill Sharpe's Tridents courtesy card. Bill was a founding member and the first President of the club. 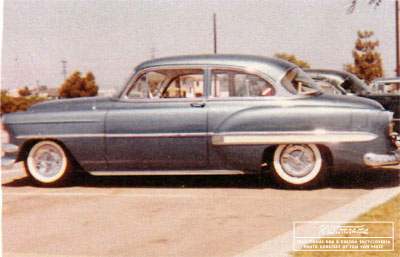 Tom Von Pertz's 1954 Chevrolet of Lynwood, California. Tom was a member of Tridends, and he had the car when he joined the club in 1960. "I believe I was Trident #32," Tom told Sondre Kvipt of Kustomrama in 2019. Tom was the club newsletter editor for a while. 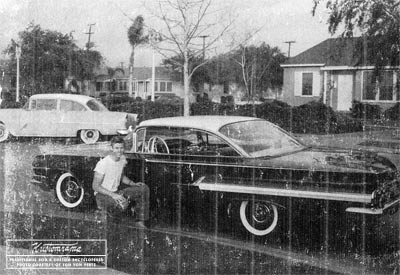 Tom Von Pertz's 1960 Chevrolet Impala of Lynwood, California."My Impala was very "trick,"" Tom told Kustomrama. "It had a bright red paint job with a bright pearl stripe painted by Barris Auto in Lynwood. Changed out the turbo glide transmission and put in a 1954 Oldsmobile four-speed hydro transmission. It was a very fun car to have."

Tridents President Bill Sharpe crowning "Miss Autorama" in 1961. The Tridents judged the competition, and the girls were chosen on how well they could present themselves to the public, their personality, and their appearance.

A newspaper article about member from the Tridents attending the 8th annual Youth Safety Run from Lynwood to San Jose. Bill Sharoe, Paul Rose and Dave Eppley drove one car, while Tom Hutson, Jim Wanke and Dale Lake drove the other. 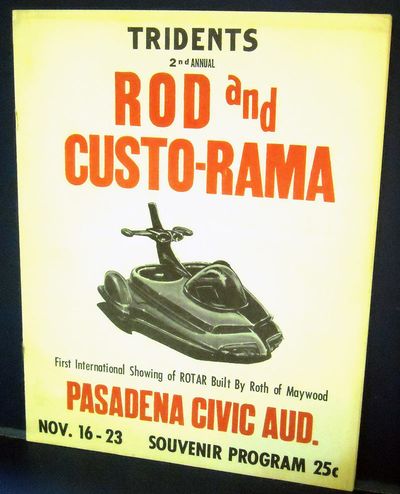 The souvenir program for the 2nd annual Tridents Rod and Custo-Rama that was held November 16-23, 1961 at the Pacsadena Pacific Auditorum in Pasadena, California. 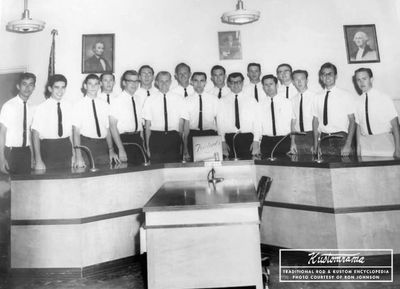 A Tridents club photo from 1962. Ron Johnson is the member to the very far right. Chris Tierheimer is the third person to the left, and Dennis Lowry is just behind Chris. President Gary Canning stands in the centre of the photo, behind the little sign. Photo courtesy of Ron Johnson. 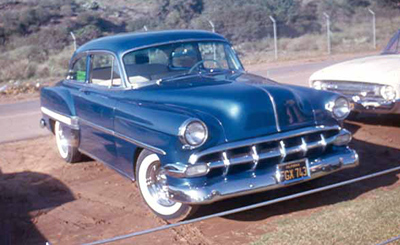 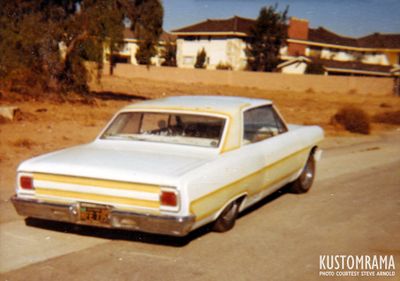 Steve Arnold's 1965 Chevrolet Malibu of Gardena, California. Steve was a member of the Tridents of Southern California car club from 1969 to 1972. In 1967 Steve installed lifts on the Malibu. 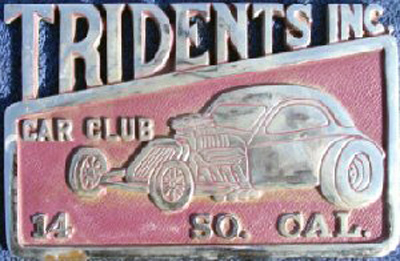 A Tridents of So. Cal car club plaque. Photo courtesy of Steve Arnold.

The Tridents car club was formed April 6th, 1959 with six charter members. The club grew fast, and by 1960 it consisted of 24 active members. The club was sponsored by Berg Sign Co. and 76 Union Oil, and registered in the State of California.[1] Bill Sharpe was the first President, and he was one of the original members.[2]

The club held a meeting every Wednesday at 7:30 pm at Maywood City Hall.[2]

Gary Canning was the President of the club in 1960.

November 16 - 20, 1960 the club held their Tridents Rod Custom Autorama at the Pasadena Civic Auditorium. The show was produced by Silvergate Production of San Diego.[1] In 2019 Steve Beeler told Sondre Kvipt of Kustomrama that the club made a ton of money off those shows. "Back in those days, clubs would have what is called a "Poker Run" with a rock'n'roll dance afterwards. A Poker Run is kind of a race through town with specific stops you have to find, and when you stop, the guys there give you an envelope with a playing card inside. When you get to the end of the run you have seven envelopes and take the best 5 cards you have and makes a poker hand. The highest hand wins a prize. The there's the dance with a bunch of girls car clubs attending too." Steve remembered that the Tridents would rent a double-decker bus, have a small band in the back and drink beer all through the run, "What a ball," he told Kustomrama.[3]

The Tridents had their own club newsletter. Tom Von Pertz, who joined the club in 1960, acted as the editor of the newsletter for a while. In 2019 Tom told Sondre Kvipt that he would write it up, and that Gary Canning would print it at his home print shop; "Gary also did all the Tridends cars, etc."[4]

Please get in touch with us at mail@kustomrama.com if you have additional information or photos to share about Tridents of Southern California.