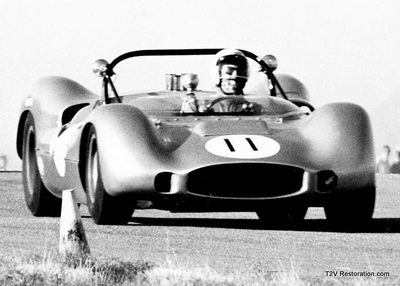 Owen Gibson of T2V Racing and Restoration is twice blessed. Not only did he discover the 1957 Townsend Typhoon MK 2 in 2000, a car he reintroduced to the world at the 2006 Monterey Historics, he recently uncovered the wildest of all Towsend creations, the midengined Mk 4. This makes Gibson the caretaker of Frank Townsend’s first and last American road racing specials, a distinction he relishes.

Gibson’s interest in Townsend cars began in 1999 when he was looking for a unique project. He found an unidentified basket case in Arivaca, AZ which he later discovered was the Townsend Mk 2. Gibson began to research Townsend, made contact with Frank Townsend, and the two are now the best of friends. Frank is a winner in road racing, drag racing, off road and salt flats racing.

The Townsend Mk 4 was born in 1964 from the remains of a wrecked Genie. Townsend designed a 1.5" tubular chassis with conventional coil-over- suspension at all four corners. Front discs brakes were large Girling units from the Genie; the rear assembly and brakes were sourced from a Corvette. The body was constructed by modifying a new Mk 9 Genie and was painted silver. Motivation came from stroker Aluminum POB, acquired from Smokie Yunick, backed by a Collotti transaxle. When Townsend tired of the Pontiac’s oiling issues a Chevy 427 L-88 was installed. A Hewland was swapped in when it became apparent that the 427 monster was more than the Collotti could handle. The car was a ground pounder and finished 4th twice in class at the AARC with Pete Voevodsky at the wheel. 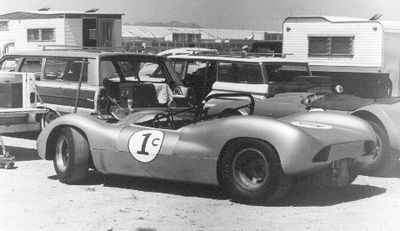 Once the Mk 2 “Purple People Eater” restoration was underway, Gibson began to receive leads regarding the whereabouts of the missing midengined Mk 4 car. After four years of dead ends about a Cowboy named Yote’s who had the car “up north”, Gibson hit on a clever idea. “I called the Colorado Cattlemen’s Association and asked about ranches run by the Yote family. There were no Yote’s but there was a Yost family just over the state line in Wyoming.” A little searching turned up a ranch outside Wheatland, Wyoming. “After many calls and a letter I was able to contact Don Yost. He was friendly but was only interested in selling the car to the original driver (Pete Voevodsky).” That’s when Gibson had another great idea. “Pete, Frank and I formed a partnership to buy and restore the car. I got the cash, called Leonard Strang (one of the original crew members) and readied the trailer. Strang and Gibson drove to Denver where they picked up Voevodsky. The group was somewhat concerned that Yost was not answering his cell phone but it was too late to turn back, hell the adventure was on!

Thankfully, Gibson was well prepared. “I had scrutinized the Yost ranch via satellite images and figured out how to navigate the one lane roads from the freeway back to the ranch. As we topped the bluff over the old ranch I recognized the barn that the Mk 5 has resided in since the 70's. We arrived at the ranch at exactly 9:30 AM and the only sign of life was an energetic Corgi just glad to see someone.” The barn was open and there sat the Mark 4, painted orange, tires rotting off, covered in hay. Voevodsky and Strang circled the car, glad to see their old friend but a tad distressed about its condition. Apparently someone had began to convert the beast for street use as it was sporting 1967 Camaro tail lights and had head light buckets cut up front. But what would happen next? 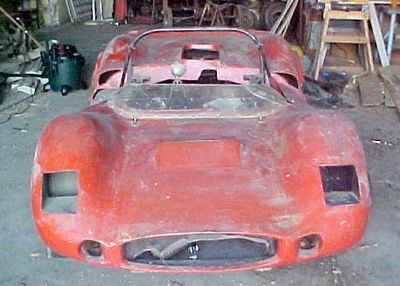 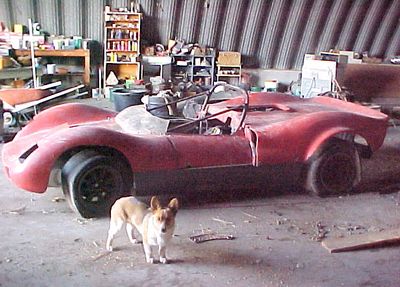 Gibson says they walked around the car for what seemed like hours (it wasn’t really) until all of a sudden “a truck pulls up and Yost, in full Carhartt regalia, steps out.” “Been to the notary, left my phone in the tractor,” were his first words. Gibson recalls thinking, “Good sign him notarizing the Bill of Sale I had mailed him, maybe we will be driving home with the car.”

Voevodsky and Yost shook hands and the group had a long discussion. Yost relayed the story of his coming to own the car. Apparently a Tucson man had met him at a power plant construction site in Wyoming in the early 1970's and had convinced him to come to Arizona to work on some jobs. When the money for the work in Arizona dried up, Yost took the car (then believed to be a Genie) as payment. When Yost’s dad tired of the “worthless” car taking up space in the barn, he sold it for $200 to a local kid. Horrified, Yost reacquired the car minus gauges and steering wheel.

The team loaded the car onto the trailer and joyously headed back to the Gibson Ranch, home to the T2V Racing and Restoration shop. There the car was reintroduced to its older brother, the Townsend Typhoon Mark 2. Gibson is proudly restoring the last of the Townsend Typhoons to its original racing specifications with the original crew at his side. 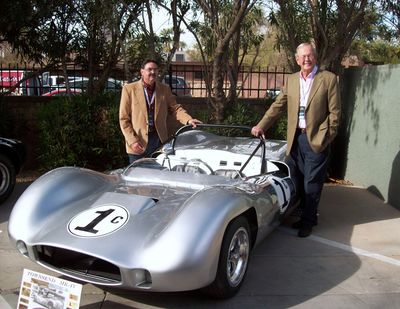 The MK 4 is nearing complete restoration and is excepted to make it’s debut in January 2011, at the Wheels of Wellness Fundraiser in Phoenix Arizona, with races to follow.

Please get in touch with us at mail@kustomrama.com if you have additional information or photos to share about Townsend Typhoon MK 4.