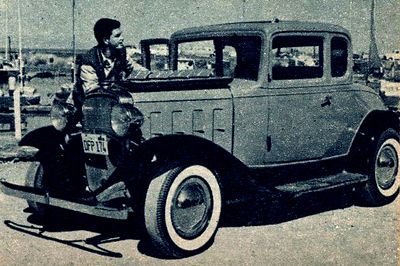 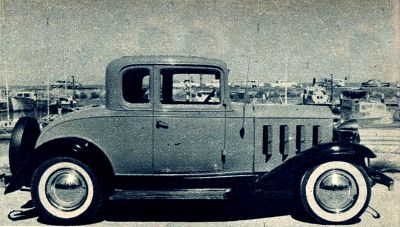 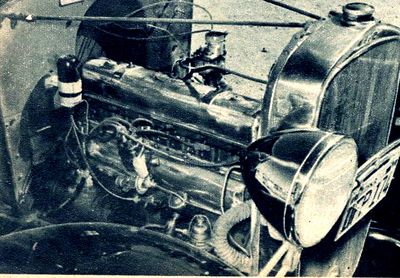 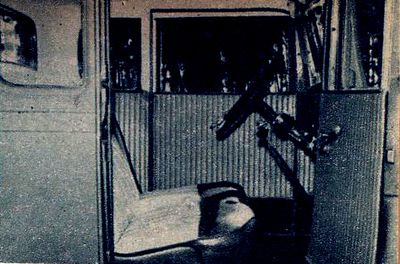 1932 Chevrolet Business Coupe built and owned by Tony Guinasso of San Mateo, California. How to lay hands on a really good-looking and sweet-running car on a mail clerk's salary was the problem that plagued 21-year-old Tony Guinasso in 1956. The fancy rods and customs he saw at shows made his mouth water, but a lot of dollar signs stood between him and the realization of his dream. [1]

The dream began taking shape when he discovered a beat-down '32 Chevy business coupe formerly occupying an obscure corner of a Stockton paint shop where Tony's brother Dick worked. The speedometer was well into its second hundred thousand miles, but, most important, the wood in the body was solid. Although the engine had outlived its usefulness, and the interior looked like a rat's nest, the body metal seemed as good as new beneath the splotched blue paint. The original owner was satisfied to part with the Chevy for $65. Dick obliged by applying the sharpest paint job, both fenders and body received nine coats of lacquer, gas-sanded between the coats to eliminate orange-peel. This gave a lustrous deep finish, with fenders black and body a flaming Pontiac red. The stock wheels were replaced with smaller diameter 16" wheels, with 6.00-16 tires up front and 7.60-16 in aft to achieve a slight rake. Whitewalls finished off the beauty treatment on the outside. The interior was face-lifted by upholstering the seats, back, panels and headlining with red and white Naugahyde. This cost $200, the biggest single item of expense in the renovation. Only other changes visible inside, is a tachometer installed on the steering column.[1]

A tour of local junkyards resulted a fair 1940 GMC truck engine, and a 1940 Chevrolet truck bell housing with standard transmission. Tony cheerfully paid $80 for the combination, and went to work. Chrome rings and valve grounds were installed. To eliminate flat spots in performance, a Zenith carburetor was mounted, backed up with a Mallory "hot plate" condenser and coil. A 1939 Chevrolet water pump was installed so that the fan could fit between engine and radiator without radical alterations. Horsepower of the revised mill is 125, about double of the original. The ride was improved by welding a bar if 1 1/2 inch channel steel across the rear of the frame and attaching airplane-type tubilar shock absorbers in diagonal position. According to Tony, it would nearly go as fast up the hills as on the flat, which was close to 90 mph. That's partly due to the stock rear end ratio of 4.55:1, which was stock. The car would go up San Francisco's seemingly vertical Filbert street hills in second gear. The car cost less than $500 to complete.[1]

Please get in touch with us at mail@kustomrama.com if you have additional information or photos to share about Tony Guinasso's 1932 Chevrolet.