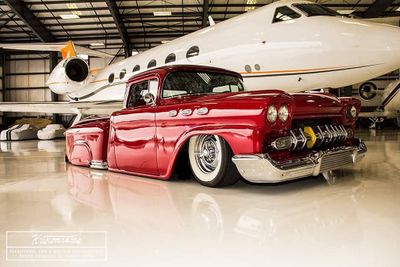 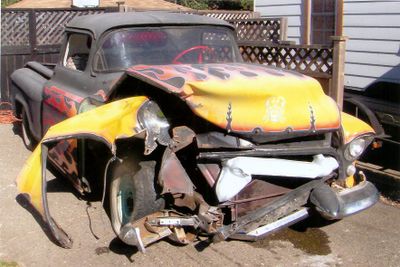 Tommy's truck as it sat after the accident in 2006. Photo courtesy of Tommy Wren. 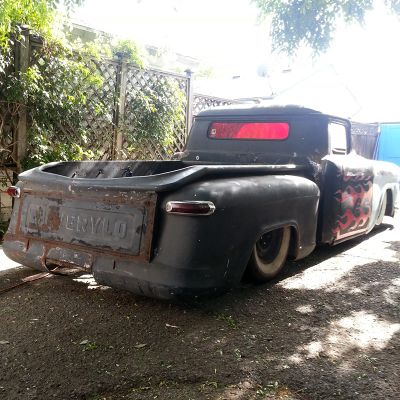 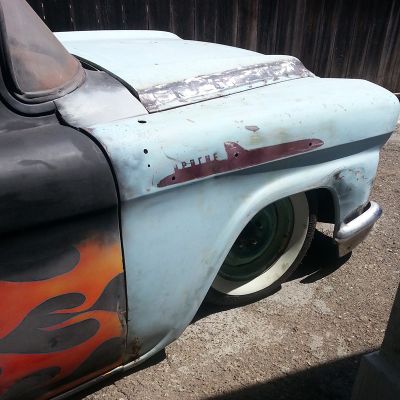 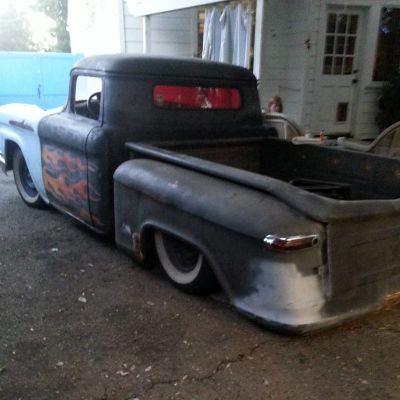 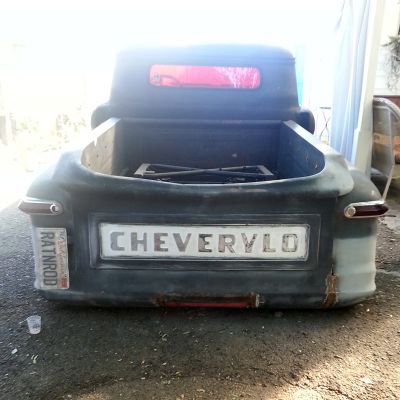 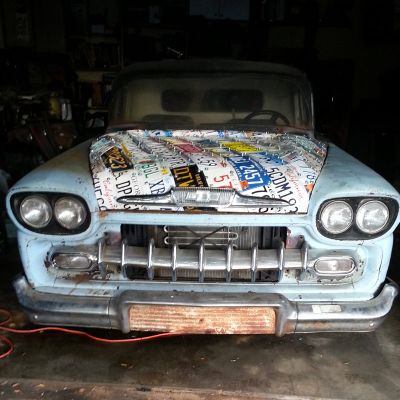 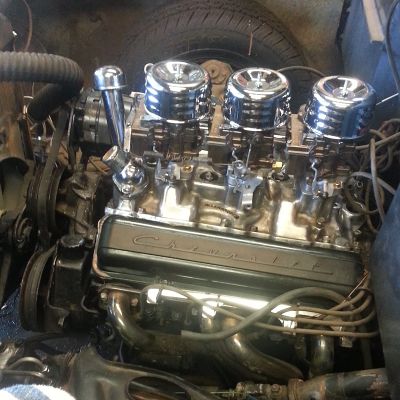 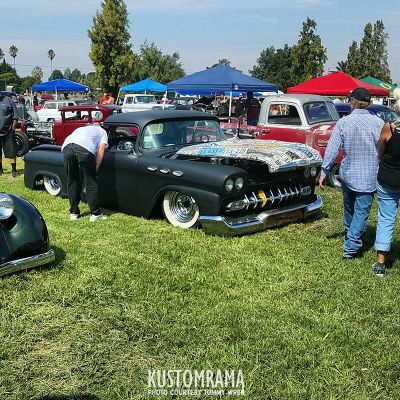 Tommy's truck as it appeared in 2017, after the body had been painted. Photo courtesy of Tommy Wren. 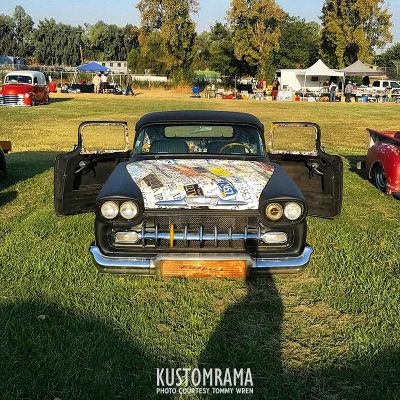 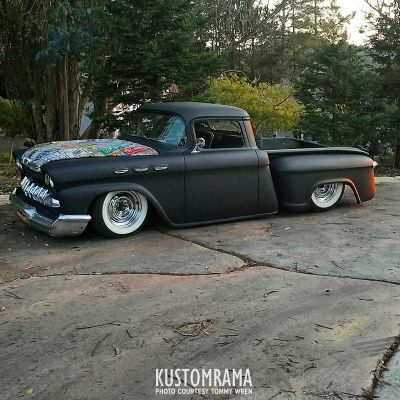 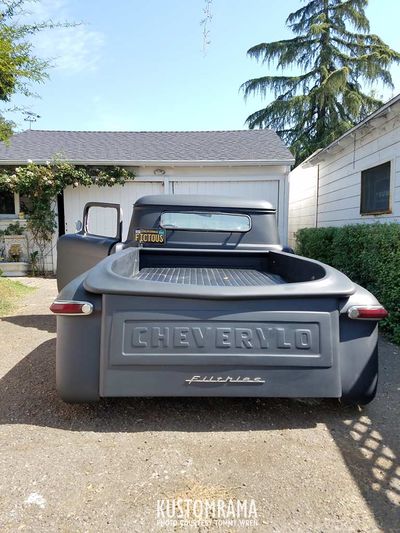 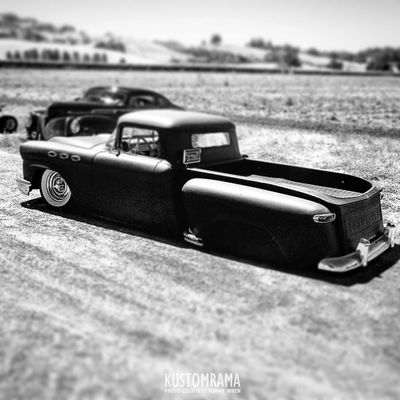 A photo of Tommy's truck taken in 2018. Photo courtesy of Tommy Wren.

The truck as it appeared in 2019, after Tommy had completed the build. Photo courtesy of Tommy Wren. 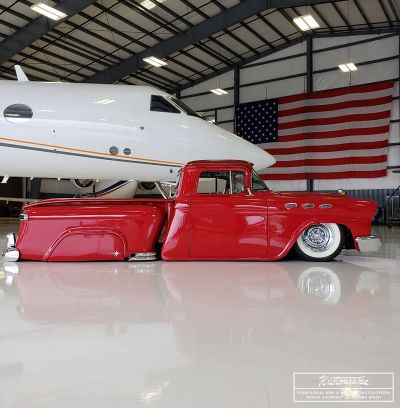 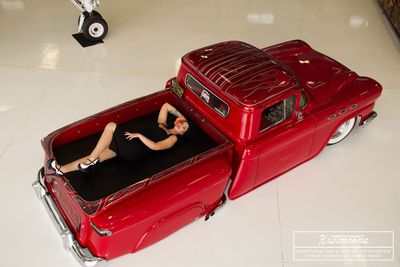 Ted Green at Absolute Customs in Rohnert Park, California painted the truck in 2019. It received a 2019 BMW red color with custom graphics and line work. After completing the build, the truck has taken home Best Kustom and Best of Show at Car Shows. Photo courtesy of Tommy Wren. 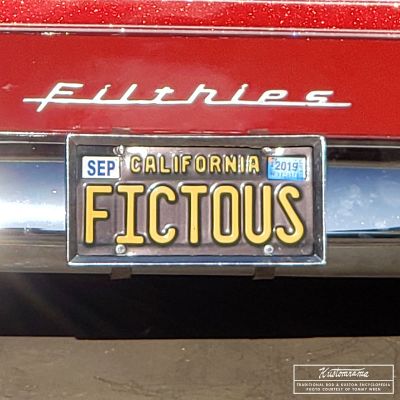 1955 Chevrolet pick up owned and restyled by South of Heaven Filthies car club member Tommy Wren of Santa Rosa, California. After wrecking the truck in 2006, Tommy started to rebuild and restyle it. Inspired by the Barris Kustoms restyled Kopper Kart, the top was chopped 4 inches and the cab was sectioned 5 inches. After sectioning the cab, Tommy tapered the corners to match the restyled fenders. He molded on a 1958 Chevrolet Apache front that he dressed up with 1956 Buick portholes, a 1958 Chevrolet Impala front bumper, and a 1954 Chevrolet grille with a gold tooth. The hood was sectioned to match the cab with a reverse tilt. The door handles were shaved, emblems removed, and suicide doors were done by swapping the hinges. The bed was custom made featuring a rolled and sealed tailgate with the lettering "CHEVERYLO" (she very low.) The inside bed was covered in black tuck and roll vinyl. The rear fenders were stretched the length of the bed and fitted with custom skirts handmade by the Menges Twins Speed Shop. The skirts were dressed up with a Lincoln Premier emblem. 1948 Mercury taillights were grafted in along with a front 1955 Chevrolet bumper in the rear. Custom chrome dual exhausts were added out the sides.[1]

Tommy notched the rear frame, while the front of the frame was taken from a 1970 Chevrolet Camaro. The truck received air bags on all four corners and a 1978 Chevrolet 350 from a C-10. The engine was hooked to a hydro automatic transmission with a 16 inch Lokar shifter. The engine received headers and a three-carb intake. Inside, Tommy installed a 1955 Chevrolet Bel-Air passenger car dash and 1965 Ford Thunderbird seats with a 1962 Ford Falcon center console. BFGoodrich Radial wide whites with chrome steelies and center knockoffs finished up the look. Ted Green at Absolute Customs in Rohnert Park, California painted the truck in 2019. It received a 2019 BMW red color with custom graphics and line work. After completing the build, the truck has taken home Best Kustom and Best of Show at Car Shows. In 2019 Tommy had owned it for more than 22 years.[1]

Please get in touch with us at mail@kustomrama.com if you have additional information or photos to share about Tommy Wren's 1955 Chevrolet.