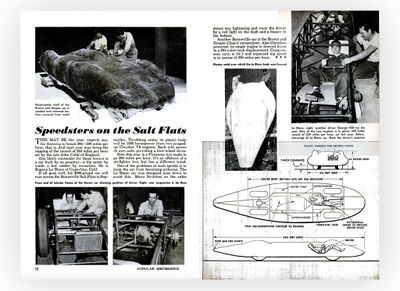 Construction photos of the LeBlanc Special were printed in Popular Mechanics August 1953. 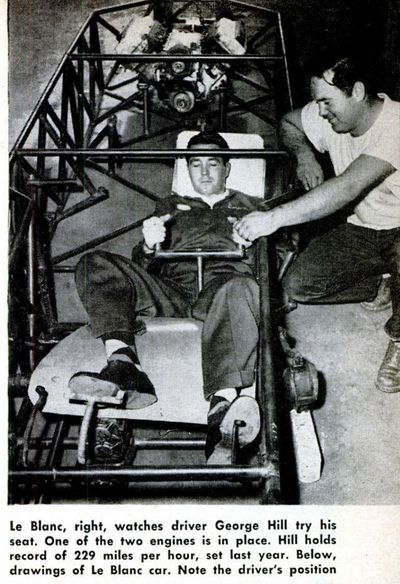 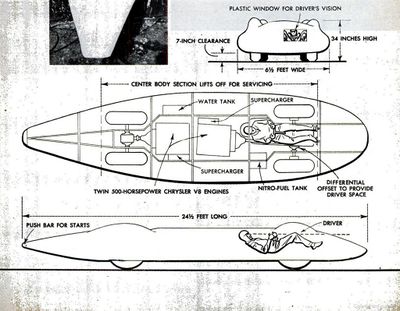 Drawings of the LeBlanc Special. Photo courtesy of Popular Mechanics. 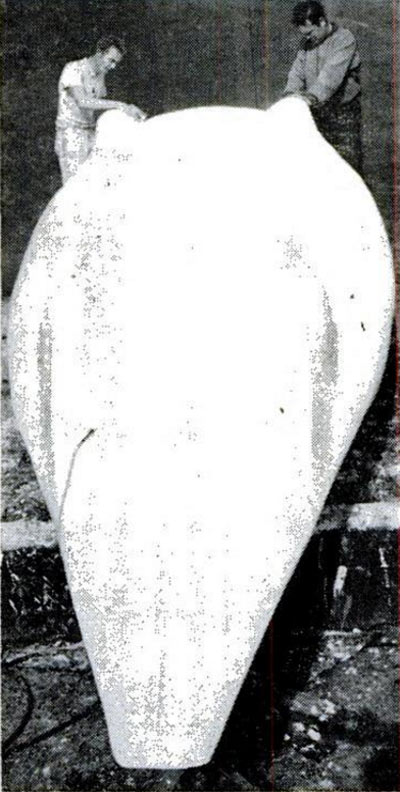 A photo of the plastic mold that the LeBlanc body was formed over. Photo courtesy of Popular Mechanics. 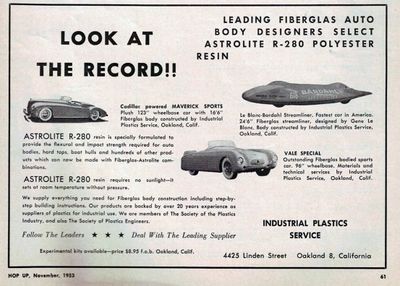 An ad for Industrial Plastics Service showcasing the LeBlanc Special. This ad was published in Hop Up November 1953. 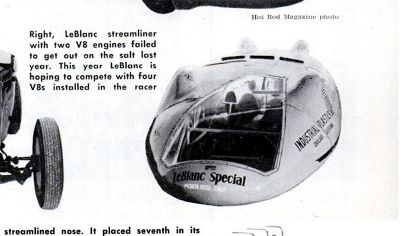 A photo of the LeBlanc special appeared in Popular Mechanics August 1954. 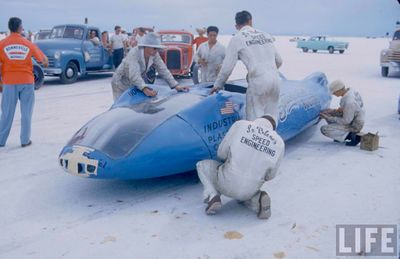 A photo of the LeBlanc Special taken at Bonneville in 1954. Photo courtesy of Life Magazine. 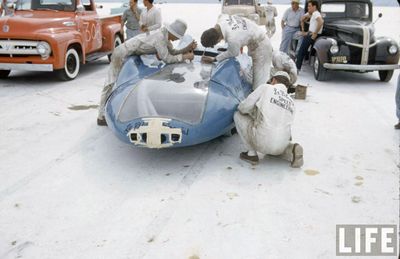 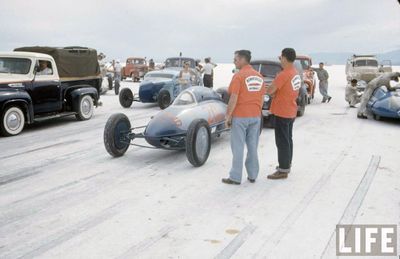 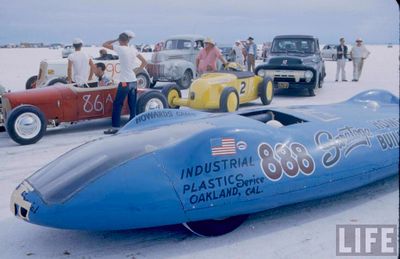 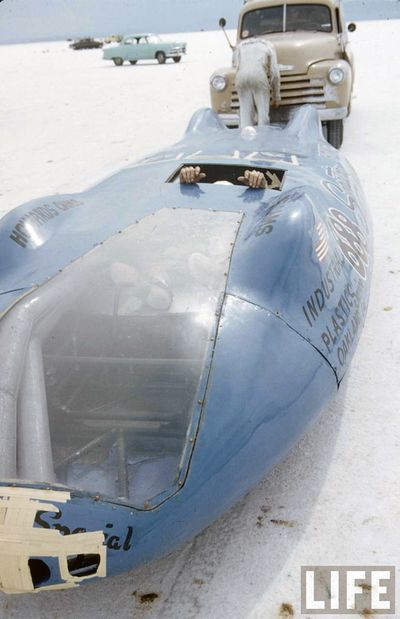 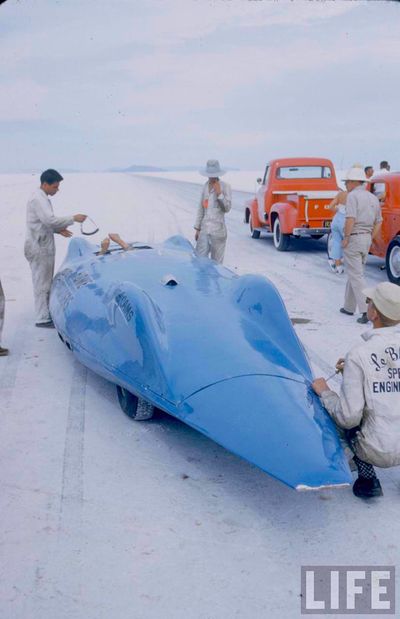 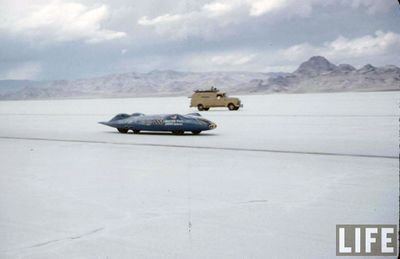 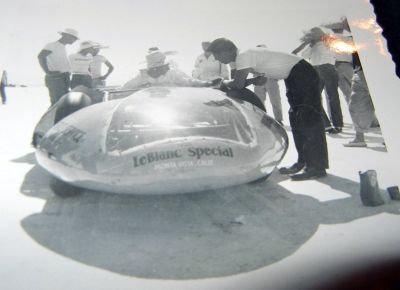 A photo of the LeBlanc Special taken at Bonneville. The photo was advertised for sale on eBay in February of 2013, and according to the listing it was taken in 1951. It looks more like it was taken in 1954. Photo courtesy of eBay. 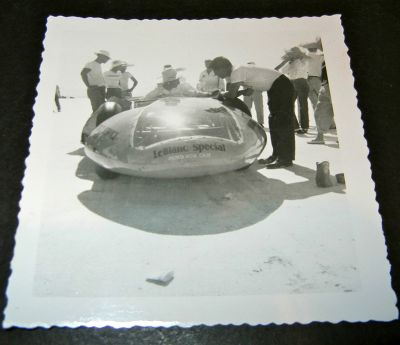 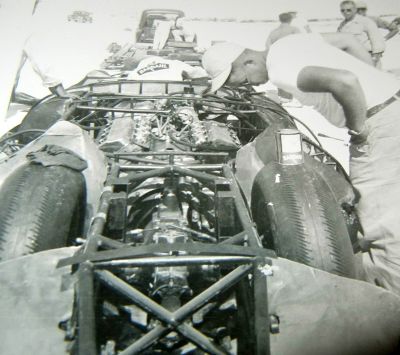 The LeBlanc Special was a Twin-Hemi streamliner designed by Gene LeBlanc of Cupertino, California. Construction photos of the car were published in Popular Mechanics August 1953, in a story titled "Speedsters on the Salt Flats." It ran a fiberglass body, constructed by Industrial Plastics Service in Oakland, Calfiofrnia. Two souped up Chrysler V8 engines produced a total of 1000 horsepowers. Each engine powered its own axle, providing a four-wheel drive. New for the 1953 season was Firsetone tires, made to go 300 miles per hour. It was an offshoot of a jet-fighter tire, but with a different tread. The LeBlanc Special was designed with a nose down to avoid from becoming airborne. Micro switches on the axles detected any lightening, and it warned the driver by a red light on the dash and a buzzer in the helmet.[1]

In November of 1953 Industrial Plastics Service ran an ad in Hop Up Magazine. The LeBlanc Special appeared in the ad, and the 24'6" fiberglass streamliner was promoted as the fastest car in America.[2]

The streamliner was Gene's attempt to set a land speed record at Bonneville in 1953, 1954 and 1955. He was given the Harvey Haller Memorial Award for sportsmanship at Bonneville in 1954. As reported in Hot Rod Magazine November 1954, "Gene's determination and contagious good humor, in spite of many difficulties, made this choice a "natural.""[3]

Please get in touch with us at mail@kustomrama.com if you have additional information or photos to share about The LeBlanc Special.