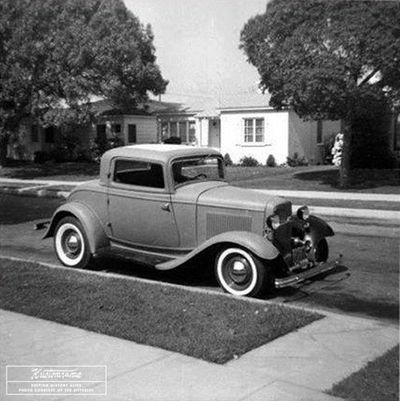 A photo of Ted's coupe taken in front of his friend's house on East Melissa Street in Tucson, Arizona. Photo courtesy of Ted Sitterley.

1932 Ford 3-Window Coupe owned by Ted Sitterley of Tucson, Arizona. "I paid $50 for it in 1955," Ted told Sondre Kvipt of Kustomrama in 2021. His coupe featured gray primer, Indian blanket upholstery, and a 304-inch flathead. "It had a 36 engine in it when I bought it from a high school buddy, and my brother and I built the big flathead with help from Little Wolf Machine Shop here in town."[1]

"We all went to Nogales, Sonora quite often and occasionally bought the Mexican serape blankets for use in our cars," Ted recalled. "They were heavy colorful, and indestructible. You have probably seen some cars which were actually fully upholstered with them. Mine were just tucked in around the original cushions. I used them in the '32 and in my '39 and '40 coupes."[1]

Please get in touch with us at mail@kustomrama.com if you have additional information or photos to share about Ted Sitterley's 1932 Ford.