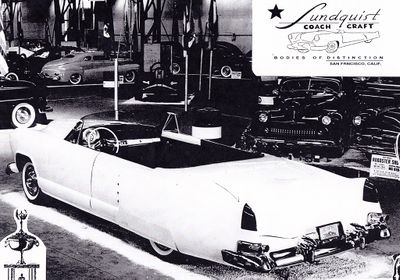 Miss Venus at the 1953 Oakland Roadster Show. Photo courtesy of Swanx of Vallejo. 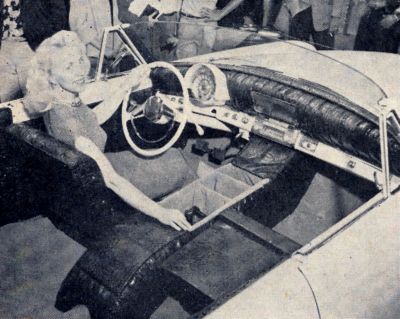 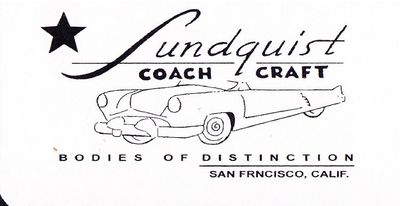 A drawing of Ted's Kaiser on the business card of his auto body business Lundquist Coach Craft.

1951 Kaiser Convertible owned and restyled by Swanx of Oakland member Ted Lundquist of Oakland, California. Ted ran an auto body business in San Francisco called Lundquist Coach Craft, and the car, named Miss Venus, was built mainly as business promotion. The car started out as a four-door sedan before Ted had the top and center posts removed. The back doors were welded shut, and the top of the doors were rolled. 1952 Lincoln taillights were frenched into series 75 Cadillac rear fenders. A 1938 Packard side-mount tire cover was built integrally with the rear deck of the car for that Continental effect. Up front a late Cadillac bumper, face bar, and guards substituted for the stock Kaiser grille.[1]

Inside the car was upholstered in brown "dragon hide". It was also fit with a cocktail bar, and a 45 record player. A moon-shaped love seat, rolled and padded with deep foam rubber was put in the back of the car. The carpeting was done in a thick lime-green frieze.[1]

Once completed, Ted's Kaiser won a Popularity Award at the 1953 National Roadster Show in Oakland, California.

In 2013 Ted's old Kaiser was owned by Harry Browne. Harry was working on restoring the car at the time.[2]

Please get in touch with us at mail@kustomrama.com if you have additional information or photos to share about Ted Lundquist's 1951 Kaiser.