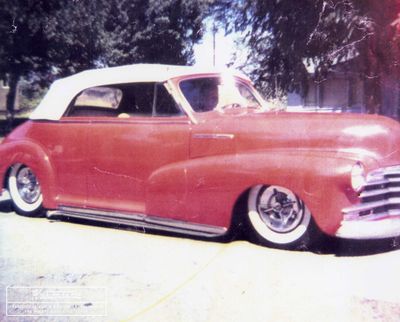 According to Mickey Ellis, "this is another example of how low our cars sat, as this is how Shelby drove it every day." Shelby was a fellow member of the Stags of Ogden car club. Photo from The Mickey Ellis Photo Collection. 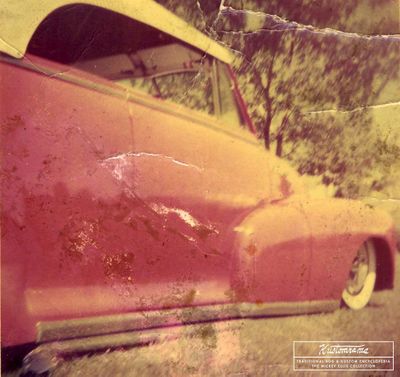 How low can you go? A low angle shot of Shelby's convertible. Photo from The Mickey Ellis Photo Collection. 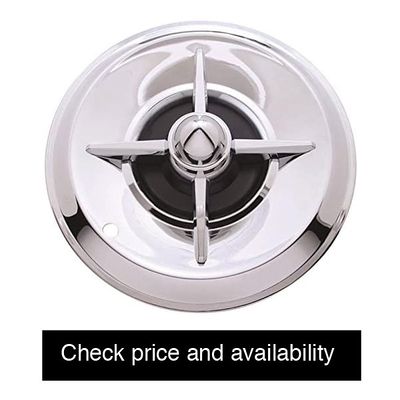 Dodge Lancer style hubcaps are popular hubcaps for 1950s customs. The hubcaps are available through Amazon.com, and a set of four starts at $225.99. Check price and availability on Amazon.com. 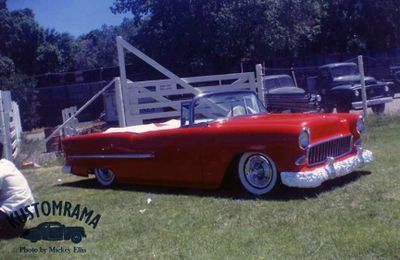 By 1960 Shelby had sold the '47 and bought this 1955 Chevrolet convertible. This photo was taken at the 1960 Custom Autorama at the Ogden Rodeo Arena. Notice the tarp over the backseats and the steering wheel cover. The front bumper is also covered in something for some reason. Photo from The Mickey Ellis Photo Collection. 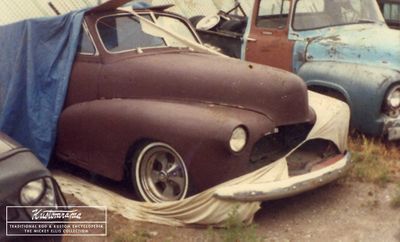 A photo of the convertible taken while Junior Bright owned it. The old custom is sitting under a tarp behind Junior's ambulance company. What happened to the car after Junior passed away is unknown. Hopefully, it is stashed away somewhere. Photo from The Mickey Ellis Photo Collection.

1947 Chevrolet Convertible owned by Stags of Ogden member Shelby Cornett of Ogden, Utah. Shelby's convertible had the Utah look, as it was low, very low. According to Mickey Ellis, Shelby's convertible is a fine example of how low their cars sat back then, as this was how Shelby drove it every day. It was a mild custom. It was nosed, decked, and shaved for door handles. The headlights were frenched and tunneled, and it was dressed up with Lancer hubcaps and lakes pipes.[1]

By 1960 Shelby had sold the '47 and bought a 1955 Chevrolet convertible. Mickey recalled that he sold the '47 to fellow Stags member Ralph Wiggins. Ralph drove it for a year or so before he sold it to Junior Bright. Junior was going to make a show car out of it, "so he had a whole bunch of engine and undercarriage stuff chromed." Unfortunately, that was about all that ever got done to it, and it ended up sitting outside for years. Mickey recalled that Junior would not ever consider selling it, so it just sat. What happened to the car after Junior passed away is unknown. Hopefully, it is stashed away somewhere.[1]

Please get in touch with us at mail@kustomrama.com if you have additional information or photos to share about Shelby Cornett's 1947 Chevrolet.