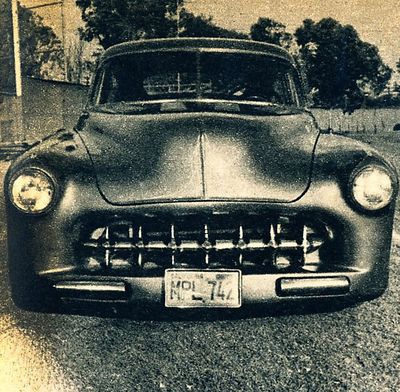 As it appeared in Car Craft January 1958. Photo by George Barris. 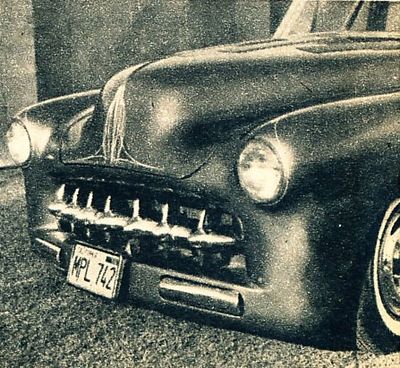 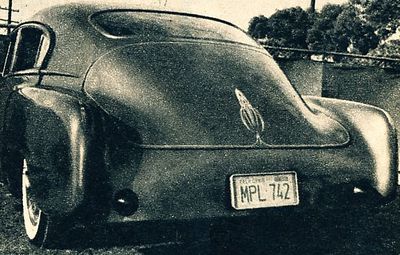 1951 Chevrolet 4-door Fleetline restyled by Branson's Custom Shop in Artesia, California for Ron Thronson of Costa Mesa, California. Ron's Fleetline featured no door handles, all 4 doors were electrically operated. The hood had been welded into one piece and peaked, it also featured rounded corners, and 64 louvers. A 1949 Mercury grille shell was molded installed, making a new smooth grille cavity. A typical George Branson trademark was the hand shaped front pan, featuring push bar bumpers, cut from driveshafts, then chromed. A 1953 Chevrolet grille was mounted from the rear, giving the illusion of a floating grille. The rear bumper was discarded as well, and all the seams were filled. It also had a set of 1953 Oldsmobile taillights and license bracket was installed in the extended rear pan. Once all the bodywork was done, it was painted Bronze and fit with a white and brown interior. The stock 216 engine was replaced by a full-house flathead Mercury. In order to get the right stance, the frame was C'd, and 3 coils were cut up front, and the rear springs were de-arched. Oldsmobile Fiesta hubcaps wrapped up the style.[1]

Please get in touch with us at mail@kustomrama.com if you have additional information or photos to share about Ron Thronson's 1951 Chevrolet.