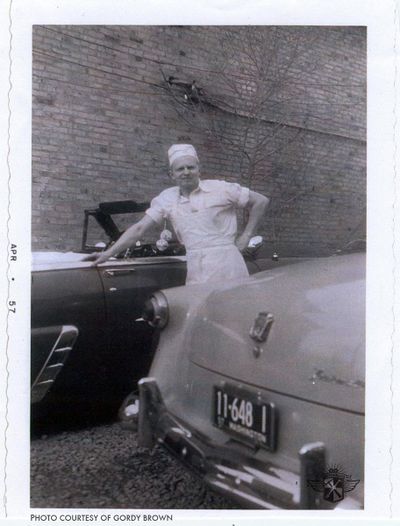 A photo of Ron's dad Ralph with Ron's Victoria and convertible dated April 1957. This was right after Ron had bought the 1952 Ford Victoria. Photo courtesy of Gordy Brown. 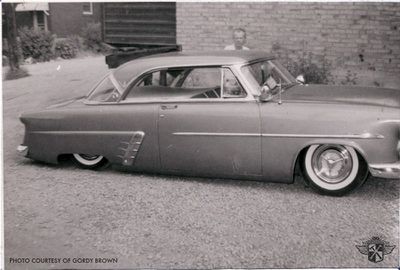 Another early photo of Ron's Victoria taken about 1957. By now the car has been lowered radically and fit with Oldsmobile Fiesta style hubcaps, pinstriping and dual spotlights. Ron has put a tarp over the back seat, and the door handles have not been shaved yet. The taillights are also stock. Photo courtesy of Gordy Brown. 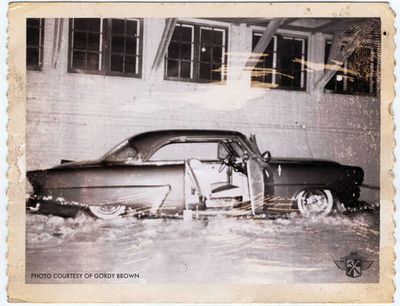 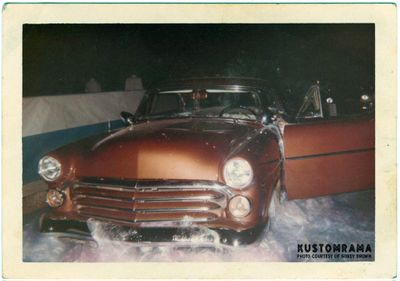 [Ron's Victoria at an indoor car show circa 1960. Photo from the Gordy Brown Photo Collection. 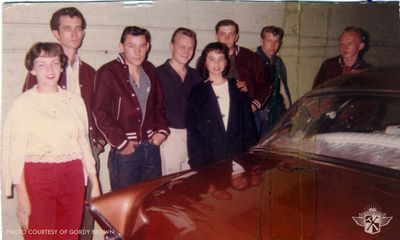 1952 Ford Victoria restyled by Vern at A-1 Auto Body for Crusaders of Salt Lake City member Ron Lerdahl of Salt Lake City, Utah. As with his 1952 Ford convertible, Ron had Vern lower the car all around. The rear was lowered more than the front. An early photo taken about 1957 shows the car before the door handles were shaved, with pinstriping, tarp over the back seat, stock taillights and dual spotlights running Oldsmobile Fiesta style hubcaps. The rear fenders were later extended and modified to a pair of 1956 Buick Roadmaster taillights. The car received the usual dechroming. The door handles were shaved and the car received a frenched antenna. The stock headlight rims were frenched, and the three grille bars from a 1956 Chrysler Windsor were fit between the stock park lights. Once the bodywork was done, the car received a copper brown paint.[1]

Please get in touch with us at mail@kustomrama.com if you have additional information or photos to share about Ron Lerdahl's 1952 Ford Victoria.