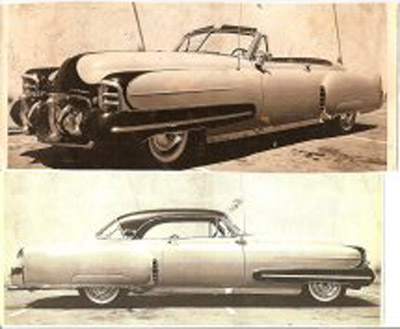 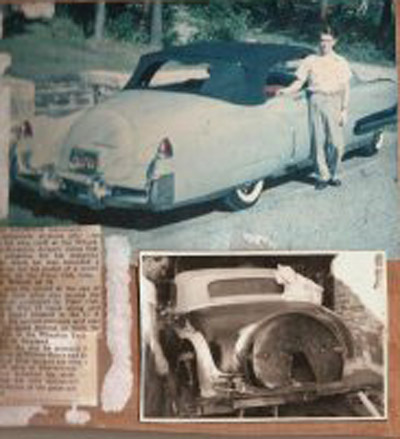 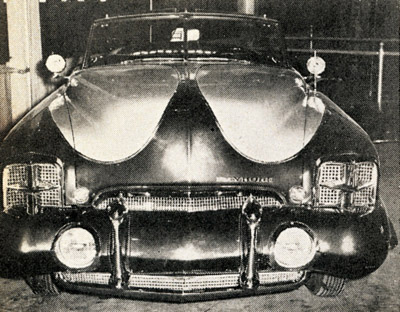 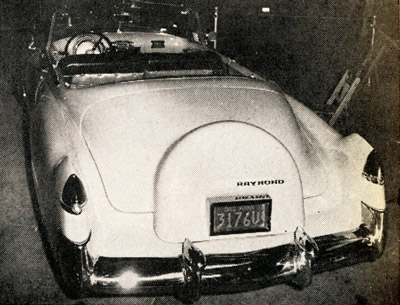 1948 Cadillac Convertible owned and restyled by Raymond Jones of Dallas, Pennsylvania. The car was known as "The Raymond" after its owner, who was 24 years old when he built it. He bought the car brand new, and began to cut it up as soon as he got it home. According to Ray's son, Greg Jones, the neighbors would talk of how crazy Ray was for cutting up such a brand new car, and that must have lost his mind during the war.[1] Only the dashboard was left untouched on Raymond's Cadillac. The wheelbase was extended from 126 to 138 inches, and the body was lengthened 20 inches. 6 inches were also added through its waist. The headlights on the car were relocated from the fenders to the massive front bumper. Square shaped grilles were installed in the fenders were the headlights used to be, working as air ducts for a supercharger. The hood was shaved and peaked, and additional steel was welded into the front section in order to reinforce the bumper area. The bumpers were extended so that they sweeped over the front wheels. A spare tire cover was molded into the deck lid in a modified "continental" fashion. The trunk and the reclining rear seat of the car was hydraulically operated. The car was fit with two interchangeable tops, one steel top for the cold winters of Shaverton, and one canvas top for coolness in the summertime. The compression ratio was increased in the engine, reducing the number of horsepower to 175. [2] The car was built before Greg was born, and all he knows about its whereabouts is that it was sold to some movie actor.[1]

Please get in touch with us at mail@kustomrama.com if you have additional information or photos to share about Raymond Jones' 1948 Cadillac.