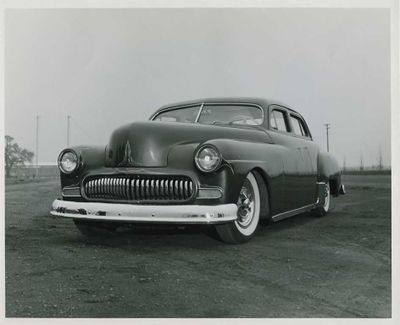 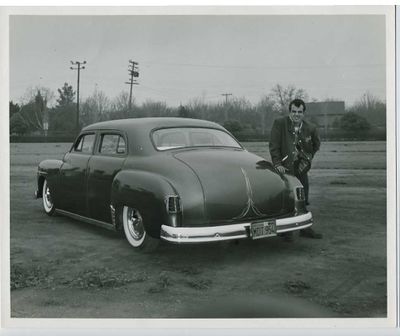 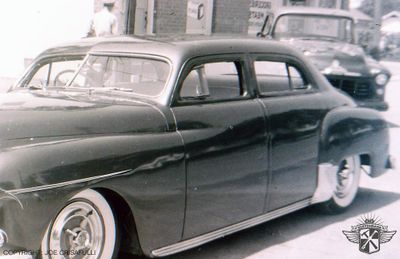 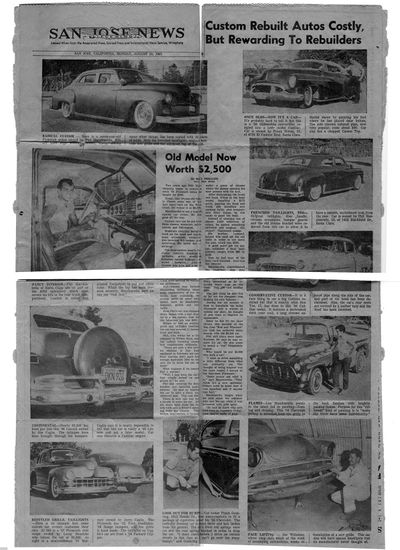 August 19, 1957, the San Jose News ran a story on custom cars of San Jose, featuring Phil's Plymouth. By then, the car had received dual spotlights. Photo courtesy of www.rodandwheelers.net. 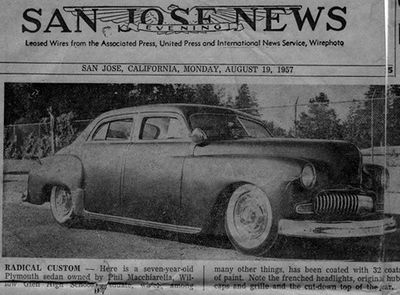 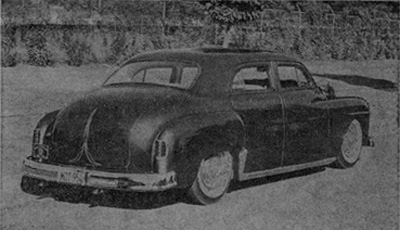 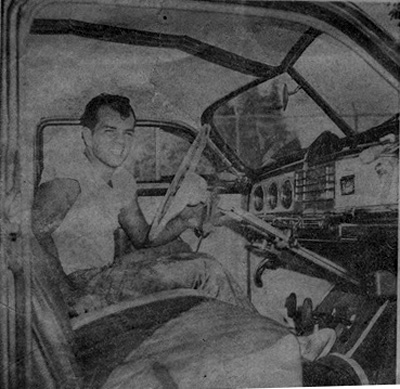 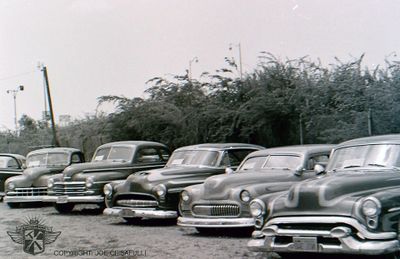 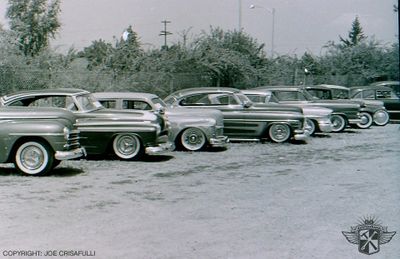 Another photo from the same event. Photo courtesy of Joe Crisafulli.

Phil's Plymouth as it appeared in Car Craft January 1960. The car was in primer, as Phil according to the caption prepared it for a sectioning by Joe Wilhelm.

1950 Plymouth owned by San Jose Rod and Wheelers member Phil Macchiarella of Santa Clara, California.[1] Phil bought the car as a stocker for $500. In 1955, at age 17, he began restyling the car. The top was chopped 7 inches, before the car was lowered 11 inches front and back. A new grille and grille opening were made, the headlights were frenched and the hood was shaved and peaked. The door handles were removed as well, and Phil had push buttons installed. All the doors were opened from the inside, with only a driver's opening from the outside. This button was hidden under a piece of chrome where the person opening the door pressed with his foot. The trunk was dechromed as well, and all body seams were filled. The stock taillights were kept, but they were frenched to the body. To further clean up the rear and achieve a smooth, uncluttered look, Phil tossed away the bumper guards and the old license plate bracket. Once the bodywork was done, Joe Crisafulli applied 32 coats of Opalescent orange paint on Phil's Plymouth. Phil's brother Lenny Macchiarella helped Phil sand off the old paint in roder to cut down on the cost. The upholstery was done in red and white rolled and pleated Naugahyde. The build took six months, and total build cost was about $2,500.[2]

August 19, 1957 the San Jose News ran a story on customized cars featuring Phil's Plymouth. The main focus of the story was the build cost of the car, and how teens invested a lot of money in old car models. According to the story Phil paid $600 for the top chop, $350 for the upholstery, $175 for the grille, $250 for the paint job, and $45 in the shaved door handles. The story could further inform that Phil decided to turn his bulky Plymouth in to an award winning full custom because he wanted to drive something a little different from what you ordinary met on the streets. The thought of being original was the main reason he turned to the four-door Plymouth. People often asked Phil what the car was. They thought it was a new sportscar. Others wanted to know how it was squashed and if anyone was hurt. Phil also admitted that the radical lowering caused him considerable difficulties, as there were only a few service stations in San Jose equipped to lubricate the car. Most stations didn't have low enough hydraulic lifts to enable Phil to drive the car onto them. In the story, Phil told the reporter that he had plans for another paint job. He also wanted to install a hot Oldsmobile engine.[2] Later photos of the Plymouth, shows it with a new scallop paint job and 1957 Cadillac hubcaps.

Phil's club, the San Jose Rod and Wheelers, won the second annual "Car Craft Car Club of the Year" award in 1960. The award was presented in Car Craft January 1960, and Phil's Plymouth was shown in primer in the story, being readied for a body sectioning by Joe Wilhelm.[3]

Please get in touch with us at mail@kustomrama.com if you have additional information or photos to share about Phil Macchiarella's 1950 Plymouth.