An early version of Paul's Tub as it sat when it was presented in the program for the 1961 Ram Rods Rod and Custom Car Show. 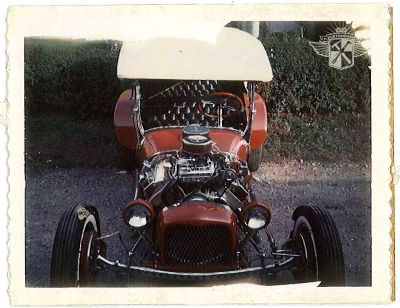 Photo provided by Chad May.

1927 Ford Model T Touring owned and built by Paul May of Wilmington, Delaware. Paul named his creation the "Too Much Tub", and according to his son the build evolved over the years from about 1960 to 1965. The build was based on a set of lightened Ford Model A frame rails. A 1927 Ford Model T touring body was channeled 4 inches, and fit with a rolled rear pan and fiberglass rear fenders. The door hinges were chromed, and the top was kept stock. Up front, Paul installed a sectioned 1932 Ford grille shell. All parts in the front suspension were chromed. The chromed front axle came from a 1937 Ford, the steering from a 1928 Franklin, and the rear end from a 1957 Chevrolet. Power came from a 1953 Chrysler HEMI V8 that had been bored to 364 cu. in. The stroke was stock, and the heads were ported and polished. Paul's engine featured Jahns 9-1 compression pistons, Grant rings, stock rods, a 1957 Dodge pressure plate, BID clutch disk, a 280 degree Herbert roller cam and kit, dual quad Stromberg carburetors, Mallory Mag-Spark distributor, custom headers with removable mufflers and a 1958 Chevrolet 12V generator. As so many other parts on the car, most of the removable parts on the engine were chromed or polished as well. The interior was done in button tufted black Naugahyde with red rugs and stainless steel door sills. The dashboard was hand formed in aluminum and housed a set of Stewart-Warner gauges. Other interior parts included a Model T steering wheel and a Moon gas pedal. Once the bodywork was done, the body was covered with 20 coats of hand rubbed lacquer. When he advertised the car for sale sometime in the 1960s, the tub rolled on chromed wheels. Photos from 1961 shows the car prior to the chromed wheels, running slicks in the rear and no fenders. Paul used his car in fair weather, and drove it about 10,000 miles while he owned it. He won over 50 trophies with the tub, including awards for best engine, best interior, best rod and best engineered. According to the ad Paul made for the car when he advertised it for sale sometime in the 1960s, the car had been seen on TV, and it had been featured in at least 5 magazines.[1]

Please get in touch with us at mail@kustomrama.com if you have additional information or photos to share about Paul May's 1927 Ford.