From Kustomrama
(Redirected from Nugget)
Jump to: navigation, search 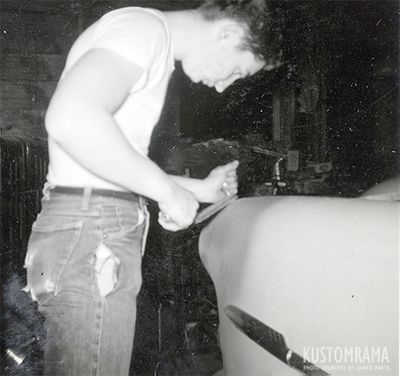 Jim working on the frenched headlights on the car. Photo courtesy of Jamco Parts. 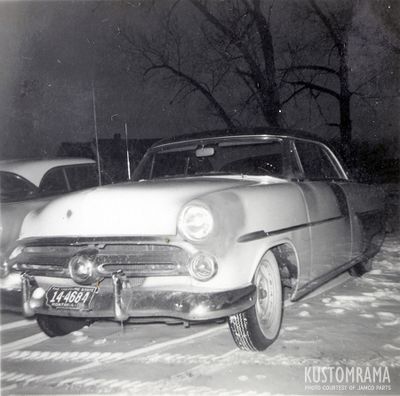 An early construction photo of the "Nugget", taken after Jim had frenched the headlights and shaved the emblems on the front fender. Photo courtesy of Jamco Parts. 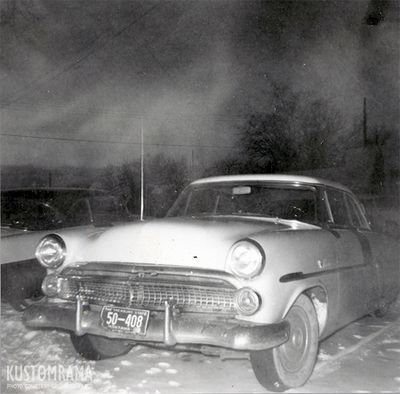 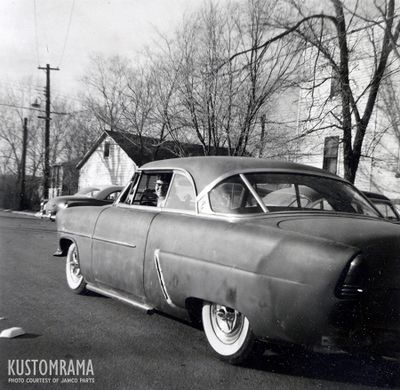 The "Nugget" in primer, after the quarter panels had been modified to accept 1956 Lincoln Premier taillights and side scoops. This version is also running custom built lake pipes. Photo courtesy of Jamco Parts. 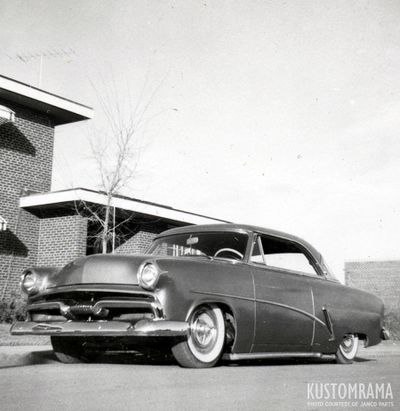 The build was completed in 1957, featuring a Metallic Gold paint job with Metallic Purple scallops. Photo courtesy of Jamco Parts. 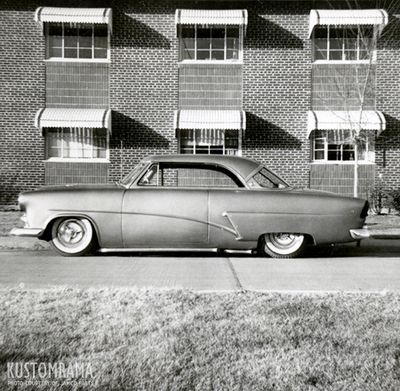 The "Nugget" was lowered and dressed up with custom built lake pipes and Oldsmobile Fiesta hubcaps. Photo courtesy of Jamco Parts. 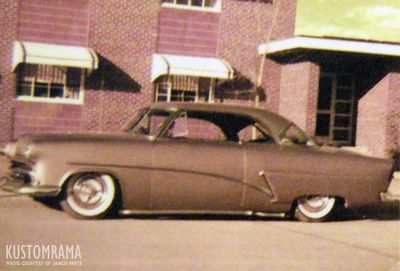 An old yellowed color photo of the "Nugget". Photo courtesy of Jamco Parts. 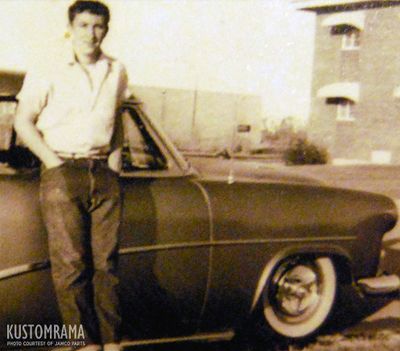 A photo of Jim with the "Nugget". Photo courtesy of Jamco Parts.

1952 Ford Victoria owned and restyled by Kingsmen of Miles City member Jim Genty of Miles City, Montana. Named "Nugget", the Victoria was Jim's high school cruiser. With the help of his friends, Jim started restyling the car in Leo Gruba's father garage in 1957. They began by shaving the door handles, emblems and trims, nosing and decking the car. The headlights were frenched, and a 1954 Ford grille lip was added before Jim installed a 1955 Plymouth grille. Frank Stoltz at Frank's Body Shop modified the rear quarter panels to accept 1956 Lincoln Premier taillights and functional side scoops.[1] 1954 Buick side trim was added along with Buick portholes in the hood before Frank painted the car Anniversary Gold with Metallic Purple scallops. The build was completed in 1957. Jim preferred his cars low, and the Victoria was slammed to the ground. Lowering blocks were installed in the back, while the front coils were chopped and torched. It was dressed up featuring custom built lake pipes and Oldsmobile Fiesta hubcaps.[2]

In 1966 Jim moved to Culver City, California, where he met and married his wife Mary Ann. While Jim was living in Miles City, Leo Gruba installed a set of inverted Nash uprights in his 1949 Ford. This effectively dropped the car several inches without reducing the suspension's travel. Having a passion for ground scraping cars, Jim continued working to develop suspension components that would serve the same purpose.[1] That eventually became the basis of Jamco Suspension, and in 1985 Jim and his wife, Mary Ann, launched J & M Enterprises Group, home of Jamco Suspension. With this, Jamco could now offer custom suspension for all American-made classics and kustoms. Fast forward to 2016, Jamco Parts with Tony Genty, Jim’s son, at the helm has expanded its product offerings to include a complete line of restoration, aftermarket and performance parts for Ford, GM and Chrysler automobiles built between 1949-1972. New product lines for all classic cars will be added steadily throughout the coming months, including body and sheet metal, exterior chrome and trim, interior trim, lighting and weather stripping, to name a few.[2]

Today, Jamco Parts is a one-stop resource for high-quality restoration and aftermarket products, as well as all the suspension components the company was founded on. Headquartered in Cypress, California with clients around the globe, every product sold through Jamco is tested for unmatched quality, satisfaction and dependability. For more information you can email Jamco at: info@jamcoparts.com or call: 1-951-549-1441.[2]

Please get in touch with us at mail@kustomrama.com if you have additional information or photos to share about Jim Genty's 1952 Ford.