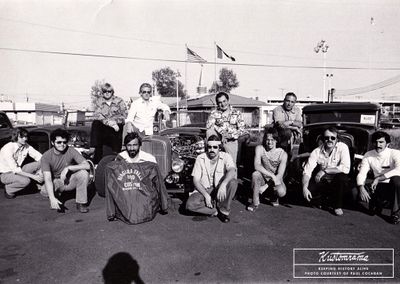 A Niagara Falls Rod & Custom group shot taken in the early 1970s. In 2021 Paul Cochran recalled that the picture was taken on Pine Ave in Niagara Falls right before the club chauffeured around the "Miss Nude World" Pageant Contestants. "No, they weren't at the time! We drove them around the Falls and then to the Park where the contest was to be held." Photo courtesy of Paul Cochran. 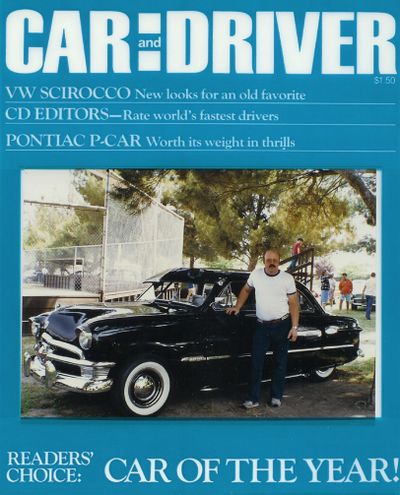 Paul Cochran with his 1950 Ford custom on a fake cover of Car and Driver. The photo was taken at The James Dean Rod Run in Paso Robles, California in the late '70s. "If I remember at Sherwood Forest Park. The '50 shoebox had a 50 Caddy engine, lowered 2" with a Borg Warner T10 transmission and a 1956 Pontiac rear end."

Niagara Falls Rod & Custom was a car club from Niagara Falls, New York. According to Paul Cochran, the club was started by three guys who needed a place to work on their cars. "This was back in the late '60s. The club grew from there and even got to a point where we had an upstairs shop in downtown Niagara Falls. Yep. an old warehouse that had an alley entrance. We'd lift the warehouse door, drive into the warehouse and drive to the back where there was a very large lift. Large enough and strong enough to lift our cars to the second floor where we had our working area. Large enough for about 10 cars. The weather in Niagara Falls is not great to work in from late October to May it seemed like it snowed and rained almost every day. So to work inside was a dream. What I can remember was that everyone kinda had their own space for their car and tools. Everyone helped everyone else, body and paint, driveline and engine, suspension, and welding. There was no stealing from one another and a lot of beer got drunk during that time." Paul lost contact with the members decades ago, and in 2021 he had no idea where anyone was, or if the club still existed. "I closed my shop and left New York and Niagara Falls in the fall of 1977 to Arizona where I went to work for a guy who had a race car shop and drag raced the pro circuit."[1]

Please get in touch with us at mail@kustomrama.com if you have additional information or photos to share about Niagara Falls Rod & Custom.