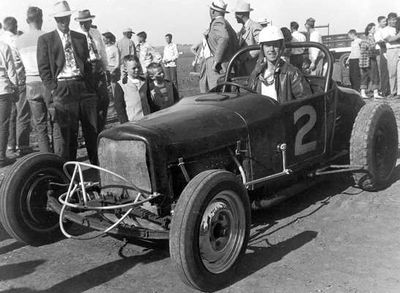 in 1950 Chuck Sears ran under the name "Bill Tague" in 1950. Photo from the Bob Mays collection, published in the Omaha World-Herald.[1] 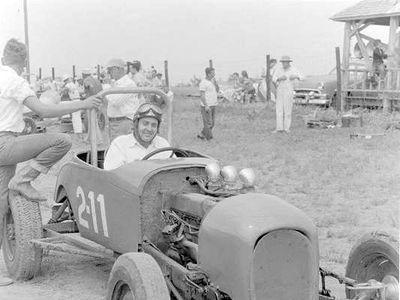 Frank Brennfoerder of Lincoln still drove a roadster at Nelson, Nebraska in 1956. Photo from the Bob Mays collection, published in the Omaha World-Herald.[1]

The Nebraska Hot Rod Racing Association was formed by a group of hot rod owners in Hastings, Nebraska in 1948. The association was formed to hold dirt track races. Later the association changed name to Nebraska Roadster Racing Association. Safety features were almost non-existent at the time. Some cars had a roll bar behind the driver, but that was about it. Later, some drivers put bars in front of them. The reason? Some fairground tracks had fences, either wooden or wire, and those fences could decapitate a wayward driver. In the few short years of the association's existence, it held races at tracks in Hastings, Fairbury, York, Nelson, Broken Bow, Holdredge, Beatrice, North Platte, Ord, Osceola, Wahoo and Franklin, all in Nebraska. Drivers from the association also raced at least twice at Riverside Speedway just across the South Omaha Bridge in Iowa, and in Belleville and Concordia, Kansas, and Savannah, Missouri.[1]

Two attempts to run hot rods at Playland Park in Council Bluffs resulted in a driver fatality each night, and that ended hot rod racing at Playland.[1]

By 1953, the car count at hot rod races was dropping, and many drivers opted to race in the new United Motor Contest Association for sprint cars. Others raced coupes and sedans in stock car races. So ended the somewhat brief history of the Nebraska Hot Rod Racing Association.[1]

Please get in touch with us at mail@kustomrama.com if you have additional information or photos to share about Nebraska Hot Rod Racing Association.